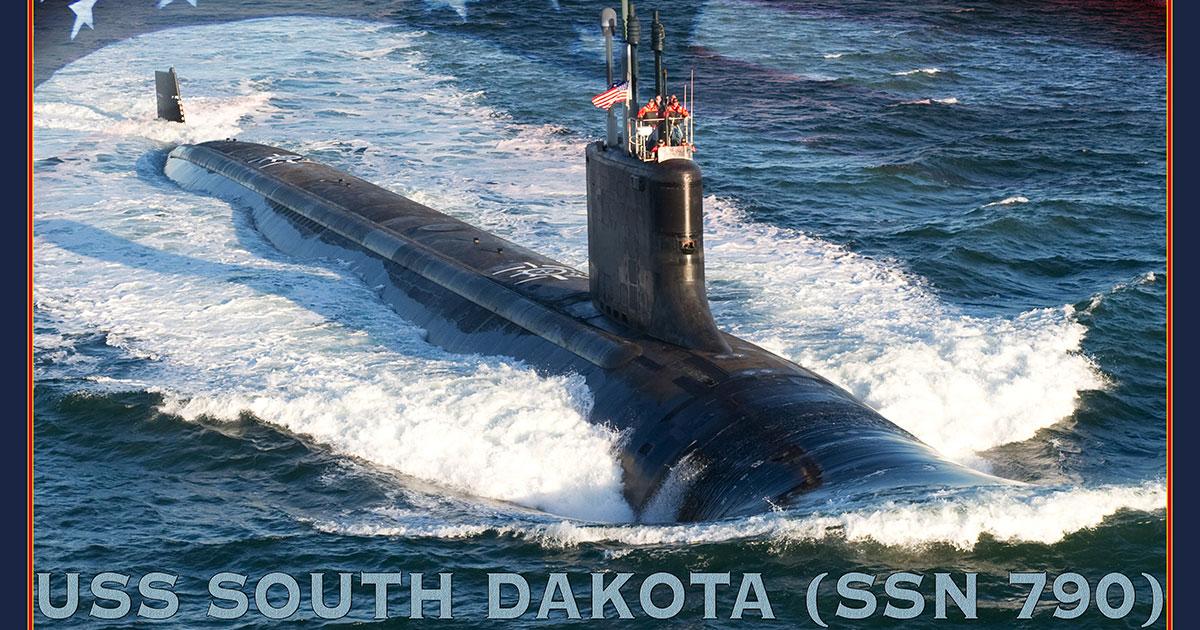 The U.S. Navy, with assistance from Mrs. Deanie Dempsey, the ship’s sponsor, gave the command, “Man our ship and bring her to life!” spurring the crew into action and all ship’s systems to be tested, including alarms, bells, radars, and scopes. 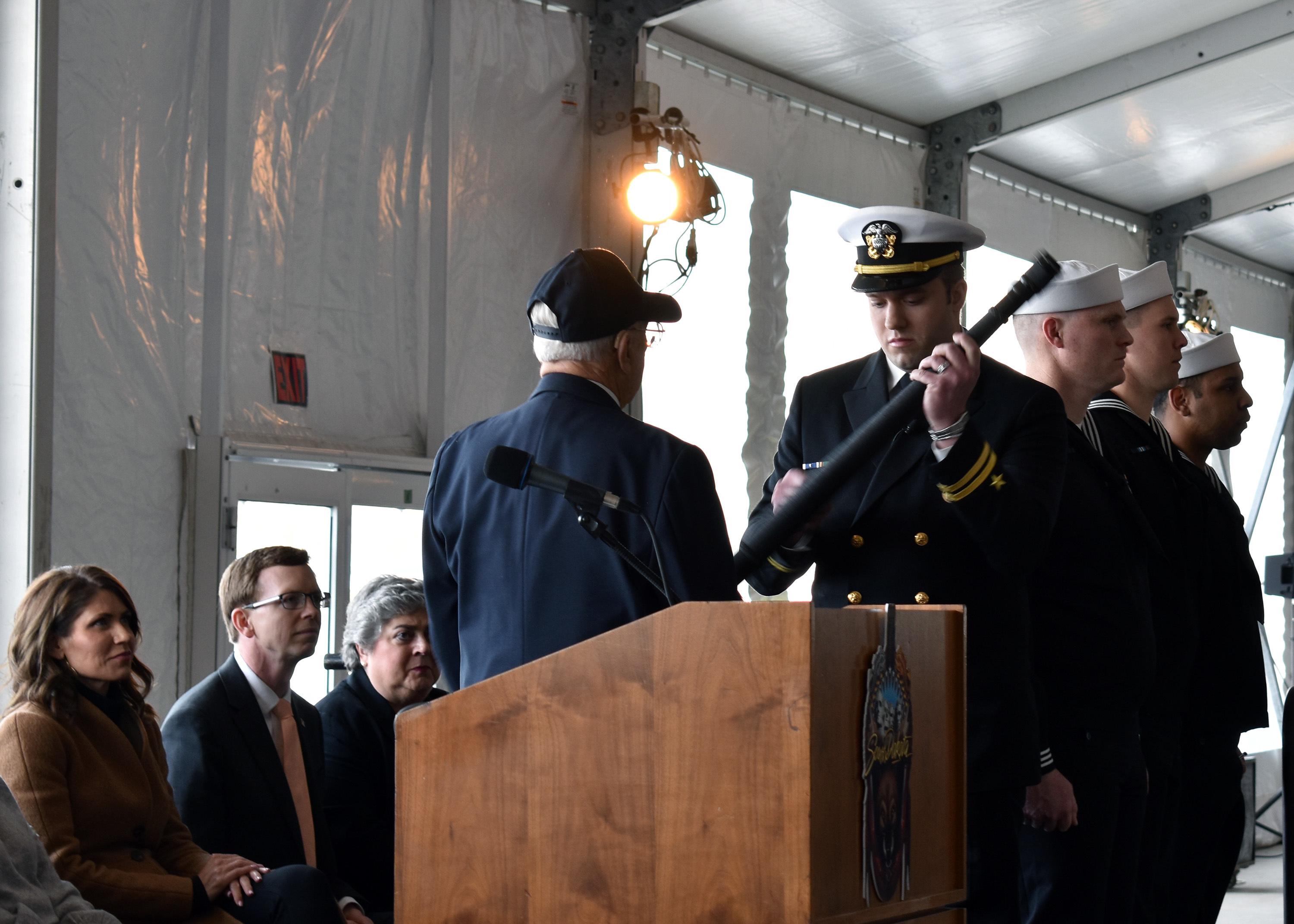 Richard Hackley, a veteran who served aboard the battleship USS South Dakota (BB 57), passes the long glass to Lt. Benjamin McFarland, the first officer of the deck to stand duty aboard the submarine South Dakota, during the boat's commissioning ceremony at Naval Submarine Base New London, Feb. 2, 2019. South Dakota is the U.S. Navy's 17th Virginia-class attack submarine and the third ship named for the State of South Dakota. (U.S. Navy photo by Mass Communication Specialist 3rd Class Tristan B. Lotz/Released)

“South Dakota was built to be on scene and unseen, forward deployed and ready to take the fight to our adversaries and protect our shores here,” said Litty. “We do that through executing the seven mission areas that the United States Submarine Force, which focus primarily on anti-submarine warfare and anti-surface warfare, but we are also very capable of reconnaissance operations and operations in littoral waters. As the commissioning crew, we’ve developed a special bond with the ship itself, which we will use to maximize our capability on our first deployment.”

Commander of the Submarine Forces, Vice Adm. Chas Richard underscored Litty’s remarks. “South Dakota will soon enter the fleet with stealth, flexibility and endurance,” said Richard, addressing the crew and attendees. “Traveling silently through the world’s oceans undetected, collecting information, preparing for battle, and if necessary, striking from the deep swiftly without warning; answering the nation’s call. To the south Dakota crew, as your motto attests, ‘Under The Sea, We Rule’ because the nation the navy and the Mt. Rushmore state are depending on you.”

Dempsey expressed what the moment and her role as the ship’s sponsor means to her. “It is my privilege to be the sponsor of USS South Dakota,” said Dempsey. “I’ve been here from the very beginning, watching both the boat and her crew grow and that gives me a tremendous sense of pride. When I said those words and the Sailors responded ‘Aye, Aye, Ma’am!’, it gave me goosebumps.”

The second South Dakota’s (BB 57) keel was laid down on 5 July 1939, at Camden, New Jersey, by the New York Shipbuilding Corporation. She was launched on 7 June 1941, sponsored by Mrs. Harlan J. Bushfield, wife of the Governor of South Dakota. The lead ship of her class, South Dakota was considered to be the most efficient battleship designed under the limitations of the Washington Naval Treaty during World War II.

Though in their nineties, some of the Sailors from the submarine’s namesake made it out to the event to see that the history and traditions were passed on to the next generation.

“It is very impressive and I am very honored to be a part of this,” said Richard Hackley, a seaman 1 st Class (Radar Striker) aboard the battleship USS South Dakota during World War II. “I’ve got fond memories from serving on South Dakota and to be included in the new South Dakota is quite an honor for me.”

South Dakota is the seventh of eight Block III Virginia-class submarines to be built. The Block III submarines are made with the new Virginia Payload Tubes designed to lower costs and increase missile-firing payload possibilities.

The first 10 Block I and Block II Virginia-class submarines have 12 individual 21-inch diameter vertical launch tubes able to fire Tomahawk Land Attack Missiles (TLAMS). The Block III submarines are built with two-larger 87-inch diameter tubes able to house six TLAMS each. “It is flattering to be chosen to a part of this tradition,” said Sonar Technician (Submarines) 2nd Class Casey Strickland, a South Dakota Plankowner. “It sets us aside from other boat crews and I think it is an honor to be part of this.”

The submarine is 377 feet long, has a 34-foot beam, and will be able to dive to depths greater than 800 feet and operate at speeds in excess of 25 knots submerged. It will operate for over 30 years without ever refueling. Construction on South

Navy to Commission Its Newest Destroyer,

Equinor and KNOC to Explore Floating Off

South African Economy Benefits from the