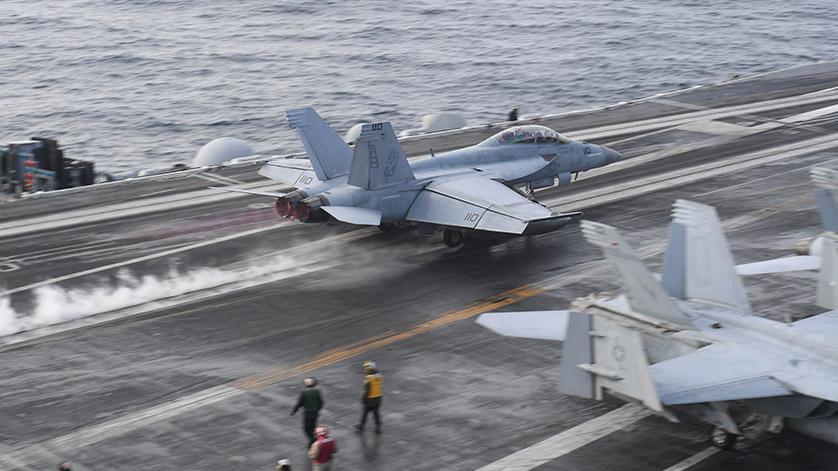 “We are thrilled to have the Harry S. Truman Carrier Strike Group back in the U.S. 6th Fleet area of operations and look forward to continuing to work with Rear Adm. Gene Black and his team as we conduct the full spectrum of maritime operations,” said Vice Adm. Lisa M. Franchetti, commander of U.S. 6th Fleet, headquartered in Naples, Italy. “The strike group’s return also gives us the opportunity to operate and train with our NATO allies and regional partners, which will enhance our interoperability and readiness as we work together to secure a safe and prosperous region for all.”

The strike group got underway Aug. 28, completing training exercises and carrier qualifications in the Atlantic, to include participating in dual-carrier operations with the Nimitz-class aircraft carrier USS Abraham Lincoln (CVN 72) and bi-lateral operations with the Royal Canadian Navy.

CVW-1 squadrons, embarked on Harry S. Truman include the “Red Rippers” of Strike Fighter Squadron (VFA) 11; the “Checkmates” of VFA-21; the “Sunliners” of VFA-81; the “Knighthawks” of VFA-136; the “Rooks” of Electronic Attack Squadron (VAQ) 137; the “Seahawks” of Carrier Airborne Early Warning Squadron (VAW) 126; the “Proud Warriors” of Helicopter Maritime Strike Squadron (HSM) 72; the Dragon Slayers” of Helicopter Sea Combat Squadron (HSC) 11; and a detachment from the “Rawhides” of Fleet Logistics Support Squadron (VRC) 40.

U.S. 6th Fleet conducts the full spectrum of joint and naval operations, often in concert with allied and interagency partners, in order to advance U.S. national interests and security and stability in Europe and Africa.

For more information on Naval Forces in Europe and Africa, visit our website here.