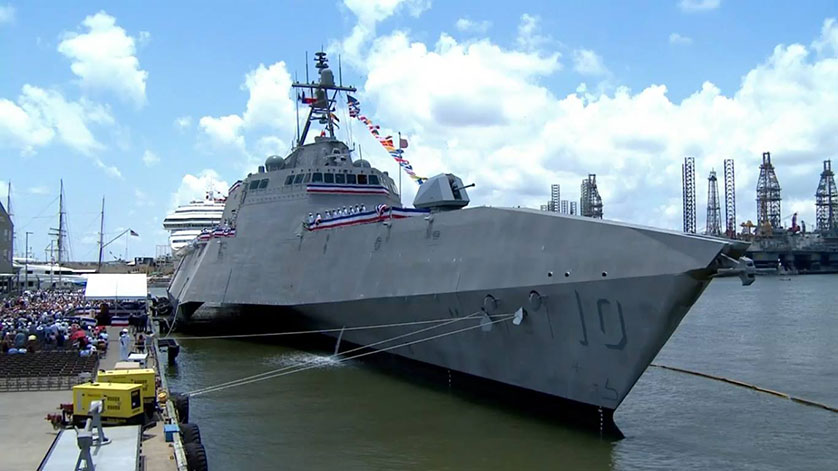 USS Gabrielle Giffords (LCS 10), the Navy's newest littoral combat ship, was brought to life by her crew before a crowd of nearly 2,500 guests at Pier 21 at the Port of Galveston, June 10.

"As we man the rails today, blood gets pumped, the ship comes alive, and the heart begins to beat," said Moran. "It's the blood that is infused by the spirit, the attitude, and the courage of its namesake. We are so proud to be part of Gabrielle Giffords' legacy to the United States."

Following the commissioning, Dr. Jill Biden, the ship's sponsor and wife of former Vice President Joe Biden, gave the time-honored Navy tradition of ordering the crew to "man our ship and bring her to life!"

The crowd sounded its approval as the crew ran aboard the ship to man their assigned stations and complete the ceremony of bringing the ship into active service to end a story that began more than five years ago.

The ship is commanded by Cmdr. Keith Woodley, a native of St. Thomas, U.S. Virgin Islands, who leads the core crew of 50 officers and enlisted personnel.

During the ceremony Woodley praised the crew for their dedication and hard work in getting the ship ready for service.

"This is not just a new ship. This is a new class of ship and that makes it even more challenging for the crew," said Woodley. "They have risen to that challenge and performed exceptionally well in getting this ship ready for service."

Most other Navy surface combatant ships have a crew of 300 or more Sailors, but littoral combat ships like Gabrielle Giffords have more automated systems and much smaller crews than their counterparts. Gabrielle Giffords' crew is just 73 at the ship's commissioning.

"It's not easy being an LCS Sailor," said Gunner's Mate 1st Class Mark Dobrinin. "We have to wear so many hats and be trained on systems and duties outside of our normal job specialty due to the small crew size. Every enlisted Sailor here volunteered for the program and we're excited to serve on USS Gabrielle Giffords."

The 3,200-ton Gabrielle Giffords was built by Austal USA in Mobile, Alabama. The ship is 421 feet in length and has a beam of 103 feet and a navigational draft of 15 feet. The ship uses two gas turbine and two diesel engines to power four steerable waterjets to speeds in excess of 40 knots.

Littoral combat ships are fast, agile, mission-focused platforms designed to operate in near-shore environments, while capable of open-ocean tasking, and win against 21st-century coastal threats such as submarines, mines, and swarming small craft.

A fast, maneuverable, and networked surface combatant, Gabrielle Giffords is capable of operating independently or with an associated strike group. It is designed to defeat growing littoral threats and provide access and dominance in coastal waters.

USS Gabrielle Giffords will depart Galveston and begin her transit to her homeport at Naval Base San Diego.

For more information, visit the Navy website and watch a video here.