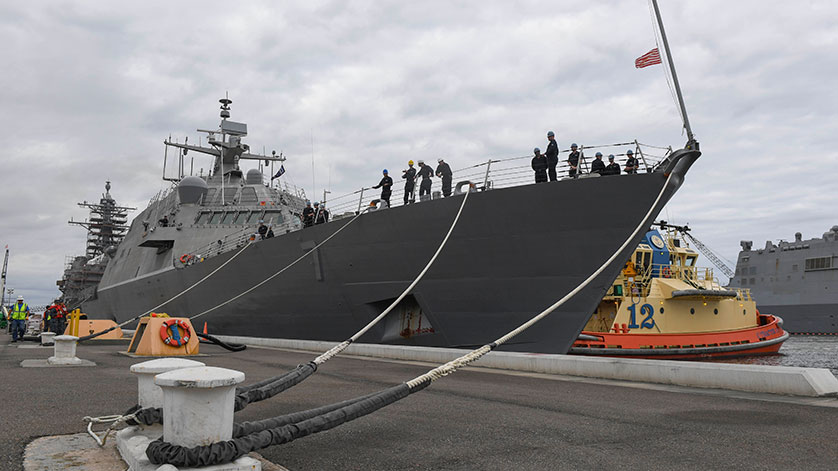 The trials, conducted by the Navy's Board of Inspection and Survey, are part of a series of post-delivery test and trial events through which the ship and its major systems are exercised. The trials began with pre-underway and material condition checks followed by at-sea demonstrations. Trial highlights included combat systems air and surface detect-to-engage scenarios, 57mm gun firing exercises, maneuvering testing and the launch/recovery of an 11-meter, rigid hull inflatable boat using the Launch Handling and Recovery System.

"After a highly successful Exchange of Command and several weeks of preparation, seeing the Final Contract Trials executed as a team was incredible," said Cmdr. David Adams, Detroit's commanding officer. "A lot of people came together from my crew, off hull crews, LCSRON 2, PMS 501, and Lockheed Martin to make the FCT happen. Now that it's over, we can't wait to continue Detroit's Combat System Ship Qualification Trails to showcase our amazing ship."

Several government and private agencies supported the trials, led by the LCS program office and included industry partner Lockheed Martin and Southeast Regional Maintenance Center. FCT is conducted prior to the end of the guarantee period to determine if there are any defects, failures or deterioration other than that due to normal wear and tear.

Constructed by Lockheed Martin in Marinette, Wisconsin, Detroit is the fourth Freedom variant LCS. She was christened Oct. 18, 2014, and commissioned Oct. 22, 2016, in Marinette. On Dec. 31, 2016, Detroit was homeport shifted to Mayport from San Diego.