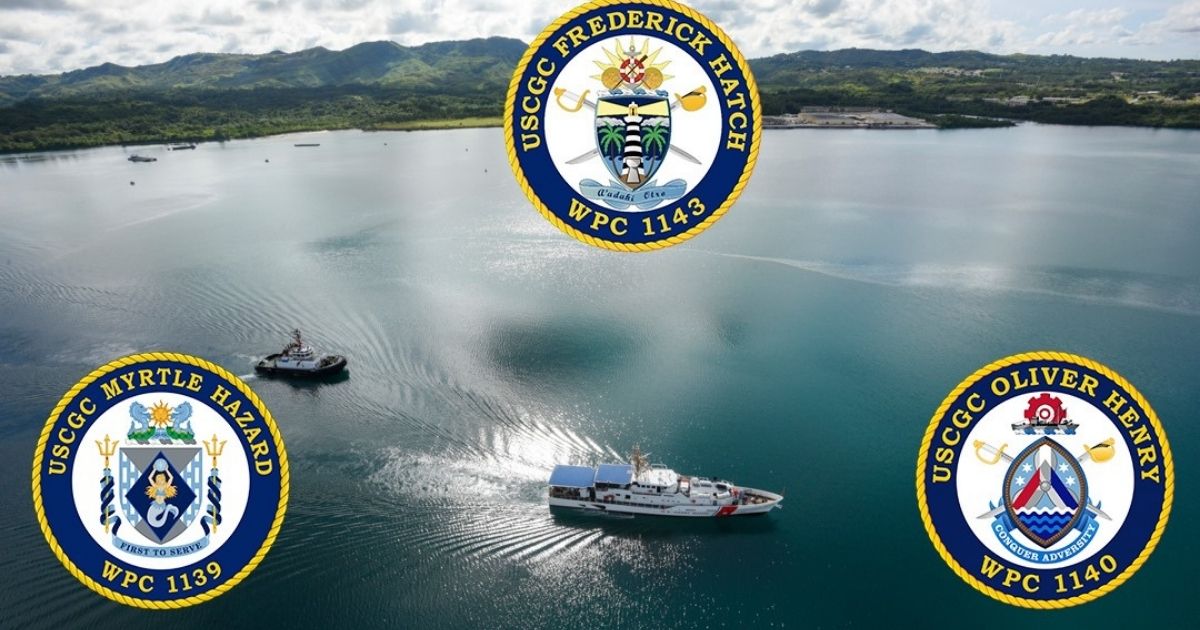 The three FRCs build out and strengthen the United States’ strategic presence in the Indo-Pacific and are there “as a response to coercive and antagonistic behaviors from China” in the region, according to U.S. Coast Guard Commandant Adm. Karl Schultz, who was also present at the ceremony.

“We’re proud of the work we do at Bollinger, and we’re especially proud of our long history supporting the men and women of the U.S. Coast Guard by building vessels of the highest quality that don’t just meet—but exceed—the mission requirements every day that they are in service,” said Charles “Skip” Bowen, former Master Chief Petty Officer of the Coast Guard and current Vice President of Government Relations at Bollinger, in his remarks during the ceremony. “I can personally attest that ton for ton the Fast Response Cutter’s capabilities are unrivaled by any ship of similar size in the world today. Whether off the coast of Miami, in the Middle East operating in the Northern Arabian Gulf, or here in the Pacific, Bollinger Built Fast Response Cutters are exceeding all expectations in mission effectiveness, endurance and capability.”

Cutters Hazard, Henry and Hatch represent the 162nd, 163rd and the 166th cutters that Bollinger has built for the Coast Guard over a 36-year period. The majority of the builds occurred despite the COVID-19 global pandemic and six named storms impacting the Gulf region, all of which affected Louisiana and two of which made landfall in the state as hurricanes, including Hurricane Laura – a Category 4 storm and the strongest to hit the state since the Great Storm of 1856. Despite these challenges, Bollinger undertook precautions to ensure the health and safety of employees and maintained its record of on-time deliveries to the Coast Guard.

“Bollinger is incredibly proud to continue enhancing and supporting the Coast Guard’s operational presence and mission in the Indo-Pacific region,” said Ben Bordelon, Bollinger President and CEO. “Bollinger’s unique experience and long history building for the Coast Guard is unparalleled and has shown time and time again that we can successfully deliver the highest quality vessels on a reliable, aggressive production schedule and cost, even in the most challenging circumstances.”

The Coast Guard took delivery of the 154-foot USCGC Frederick Hatch in Key West, Florida in February before embarking on the 69-day, 11,400 nautical mile journey to Apra Harbor. It joined its sister cutters, USCGC Hazard and USCGC Henry, that arrived in Guam in September and December of last year, respectively.

The homeporting of the three cutters in Guam is part of the Coast Guard’s "doubling down on Oceania," allowing more frequent and longer patrols in an area where the service has increased its presence over the past two years and is aligned with the U.S. position on maritime security in the Indo-Pacific.