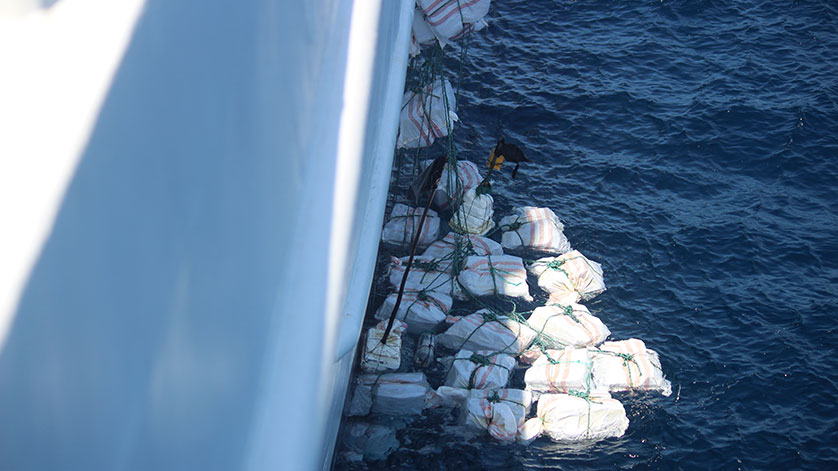 The Valiant’s crew returned to Naval Station Mayport in early June from a 63-day patrol after seizing an estimated $147 million worth of cocaine, assisting in the removal of another $170 million of contraband interdicted by other Coast Guard cutters and apprehending 10 suspected drug smugglers.

The ship seized five drug-laden vessels with nearly five tons of cocaine and apprehended 10 suspected traffickers. The cutter Valiant crew also assisted in the transfer ashore of another six tons of cocaine interdicted by other cutters on patrol in the heavily trafficked drug transit zone.

Cmdr. Timothy Cronin, commanding officer of the Valiant, said the patrol was a success and will help bring stability to the Western Hemisphere. “We are doing a lot more than keeping drugs from reaching our streets and poisoning our youth. The Coast Guard’s maritime interdictions will also help reduce the horrific violence and instability caused by transnational criminal organizations in many Central American countries. By helping our neighbors to the south, we create a safer and more secure America.”

Interdicting drugs was not the only mission the cutter Valiant crew conducted during the patrol. In late April, they saved one baby and three adult olive ridley sea turtles from entanglement in garbage and abandoned fishing gear. After spotting an unusual floating object that turned out to be a mass of lines, fishing gear and garbage, crew members in the cutter's deployable interceptor boat located the animals caught in the debris and freed them. The crew then took the drifting debris aboard the cutter for disposal ashore.

Petty Officer 3rd Class Dillon Whitaker, who disentangled the baby turtle, said the mission highlighted one of the reasons he joined the Coast Guard. "One day you're chasing drug traffickers, and the next day you get to save the life of a beautiful animal in the middle of the Pacific Ocean," said Whitaker.

Valiant crew members also dedicated hours of their liberty time ashore volunteering at the Salvation Army orphanage in Tapachula, Mexico. They painted rooms, cleaned common areas and played with the children leaving a positive impression with the local community near the Mexico-Guatemala border.

“I enjoyed giving back to the local community and spending time making the orphanage a cleaner, safer place for the children to live," said Lt. j.g. Lili Simon. "Our time there made me even more grateful for the things that I have.”

The cutter Valiant crew, along with an aviation detachment from the Coast Guard’s Helicopter Interdiction Tactical Squadron and a tactical law enforcement team, deployed to the Eastern Pacific Ocean off the coast of Central and South America as part of a partnership that falls under Joint Interagency Task Force South, a component of U.S. Southern Command. JIATF South, located in Key West, oversees the detection and monitoring of illicit traffickers and assists U.S. and multi-national law enforcement agencies with the interdiction of these illicit traffickers. The law enforcement phase of interdictions in the Eastern Pacific occur under the authority of the 11th Coast Guard District headquartered in Alameda, Calif.

This year marks the 50th year of service for the Coast Guard Cutter Valiant. The 210-foot Medium Endurance Cutter with a 75-member crew was launched in January 1967 and commissioned later that November. Valiant and 26 other Medium Endurance Cutters are slated for replacement by the Offshore Patrol Cutter. The OPC will have superior sensors, pursuit boat and helicopter capabilities, and interoperability with other military and federal partners.