US Sailors, Marines and Japanese Soldiers in Exercise Iron Fist 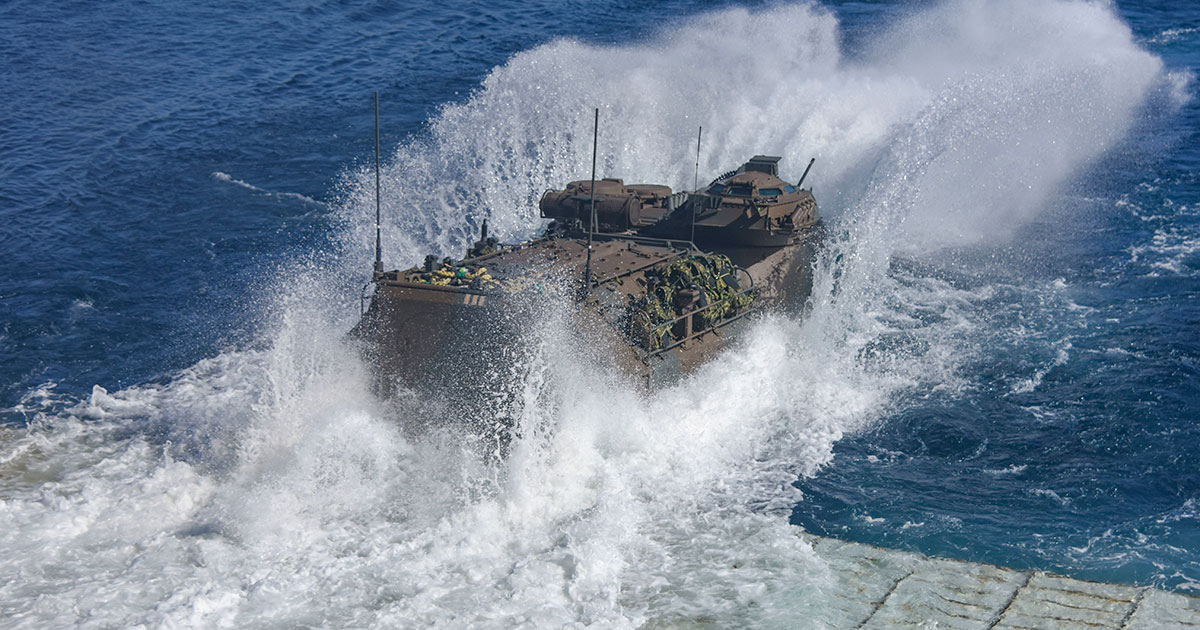 “For more than a decade, Iron fist has helped us operate together in a maritime environment,” said Rear Adm. John Gumbleton, commander, Expeditionary Strike Group 3. “The amphibious operations are vital to effective crisis response and support to regional maritime security.” Exercise Iron Fist demonstrates more than 50 years of interoperability development and enhanced amphibious capability of U.S. and Japanese forces. Pearl Harbor provided both an air and amphibious platform for U.S. Marine Corps and JGSDF soldiers to train and conduct operations.

“I am surprised at how quickly we came together as a team,” said Cmdr. Kevin T. Dean, commanding officer of Pearl Harbor. “Both the USMC and the JGSDF operate AAVs the same way, but it is another thing all together to operationalize a bilateral force quickly, despite a significant language barrier to achieve effective ship to shore tactical objectives.

"This exercise reassured that we can deliver the rapid global expeditionary response capabilities expected of the U.S. Navy and Marine Corps team.”

These rotary wing assets can put Marines on the ground at a specific location for an assault, help support them, and then extract them once a mission is accomplished. The successful evolution of the air assault reinforced the skills necessary for air and ground combat elements to establish a force on a hostile shore, if needed.

“I couldn’t be prouder of how our Sailors and Marines have performed,” said Portland’s Commanding Officer Capt. Karrey Sanders. “Portland Sailors have executed every event required of them at the highest level. This exercise has allowed the crew to demonstrate their expertise in amphibious operations and flight operations.”

The AAVs disembarked Portland in route to San Clemente Island, California, for a simulated shore landing and returned back to the ship for another successful recovery, Feb. 6. The battalion later conducted a ground assault, leaving Portland Feb. 12, in route back to Camp Pendleton.

“Over the course of the last few weeks, I know that our Marines, Sailors and Japanese soldiers have pushed themselves in the field, sharpening their technical and tactical proficiency,” Osterman said. “Training alongside each other on USS Pearl Harbor and USS Portland, the beaches of Camp Pendleton and on San Clemente Island reflects the amphibious nature that is the heart and soul of the Marine Corps and the Amphibious Rapid Deployment Brigade. It’s the bond between the Japanese soldiers, Marines and Sailors molded in shared experience—training side-by-side—that truly makes us stronger as we continue to build on the foundation of our partnerships.”

Iron Fist 2020 occurs during the 60th anniversary of the signing of the Treaty of Mutual Cooperation and Security between the U.S. and Japan, exemplifying the spirit of trust and cooperation between the Marine Corps and JGSDF. This year marked the 15th iteration of Exercise Iron Fist and put greater focus on the JGSDF’s ability to plan and conduct combined amphibious operations.

“As we continue to work side-by-side with the Japanese Self-Defense Forces, we grow our already strong partnership— making us a stronger more lethal force with the goal of maintaining peace and prosperity in the Indo-Pacific region,” Gumbleton said.

Iron Fist is an annual exercise designed to enhance the U.S. and Japanese forces’ ability to plan, communicate and conduct combined amphibious operations. Bilateral training exercises, like Iron Fist, develop forces capable of working in close collaboration and strengthen U.S. 3rd Fleet’s ability to respond quickly and effectively to crisis that may occur in the Indo-Pacific.