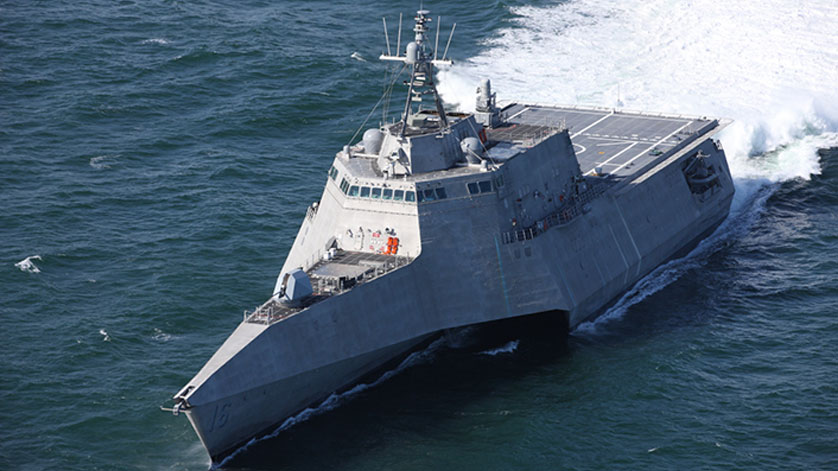 The Navy accepted delivery of the future USS Tulsa (LCS 16) during a ceremony in Mobile, Alabama, April 30.

Delivery marks the official transfer of LCS-16 from the shipbuilder, an Austal USA-led team, to the Navy. It is the final milestone prior to commissioning, which is planned for late 2018 in San Francisco.

"Today marks a significant milestone in the life of the future USS Tulsa, as transfer occurs to the Navy and she enters service," said Capt. Mike Taylor, LCS program manager. "I look forward to celebrating the commissioning of this fine ship alongside the crew later this year in San Francisco."

"We look forward to welcoming the future USS Tulsa and crew in San Diego later this year," said Capt. Matthew McGonigle, commander, LCS Squadron One (COMLCSRON ONE). "Bringing a ship to life is no small task and I commend the crew for their hard work and dedication to their ship and to the LCS community."

COMLCSRON ONE supports the operational commanders with warships ready for tasking by manning, training, equipping and maintaining littoral combat ships on the west coast.

"To see Tulsa ready for delivery, words almost can't express the amazing work that Austal, Supervisor of Shipbuilding, Gulf Coast, and Program Executive Office Unmanned and Small Combatants, have done to get her to this point," said Cmdr. Drew Borovies, Tulsa's commanding officer. "Although there is still plenty of hard work ahead, we are at the point where Tulsa is ready for her crew, and I can say without hesitation that her crew is ready for Tulsa. Tulsa and her crew are 'Tough, Ready. and Able!'"

LCS is a modular, reconfigurable ship designed to meet validated fleet requirements for surface warfare, anti-submarine warfare, and mine countermeasures missions in the littoral region. An interchangeable mission package is embarked on each LCS and provides the primary mission systems in one of these warfare areas. Using an open architecture design, modular weapons, sensor systems and a variety of manned and unmanned vehicles to gain, sustain, and exploit littoral maritime supremacy, LCS provides U.S. joint force access to critical theaters.

Program Executive Office Unmanned and Small Combatants is responsible for delivering and sustaining littoral mission capabilities to the fleet.