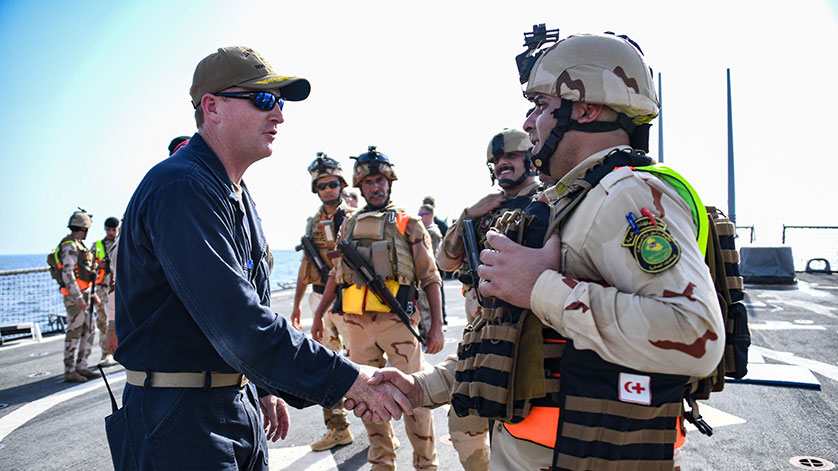 The U.S. Navy and Coast Guard completed a trilateral exercise with Iraqi navy and Kuwaiti navy partners in the Northern Arabian Gulf, August 15.

“This has been such a rewarding experience,” said Boatswain’s Mate Seaman Karen Rodriguez, assigned to The Sullivans. “I was a part of the small boat operations we conducted with the Iraqi and Kuwaiti navies and was able to watch our partners maneuver in the gulf alongside us. It’s reassuring to know we have strong partners in this area with common goals, and it was really great to see it first-hand.”

“Kuwait and Iraq play a key role in maintaining maritime stability in this region,” said Moored. “This trilateral exercise was an opportunity for all of us to flex our capabilities and learn more about our collective capability. We proved that our nations have the commitment and capacity to collectively preserve the free flow of commerce and freedom of navigation in the Gulf.”

The exercise was led by Task Force (TF) 55 and is part of a routine theater security cooperation engagement serving as an opportunity to strengthen tactical proficiency in critical mission areas and support long-term regional stability.

The U.S. 5th Fleet area of operations encompasses nearly 2.5 million square miles of water area and includes the Arabian Gulf, Gulf of Oman, Red Sea and parts of the Indian Ocean. The region is comprised of 20 countries and includes three critical choke points at the Strait of Hormuz, the Suez Canal and the Strait of Bab-al-Mandeb at the southern tip of Yemen.

Exercise Rim of the Pacific 2018 Conclud

Portugal in Twinning Exercise for an Off