US Aircraft Carrier Arrives in Vietnam for Historic Visit 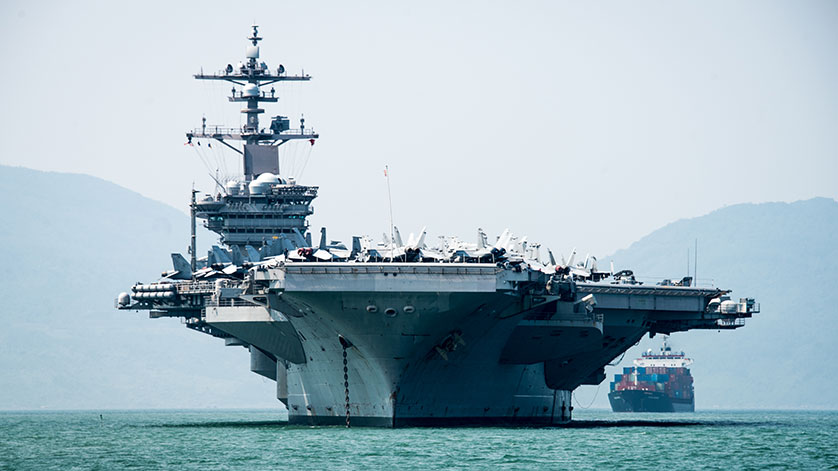 "The visit marks an enormously significant milestone in our bilateral relations and demonstrates U.S. support for a strong, prosperous, and independent Vietnam," said U.S. Ambassador to Vietnam Daniel Kritenbrink. "Through hard work, mutual respect, and by continuing to address the past while we work toward a better future, we have gone from former enemies to close partners."

"Our nations' relationship has reached new heights in the past few years, and USS Carl Vinson's port visit to Vietnam is a reflection of that," said Swift. "I am confident that engagements like this will further expand the comprehensive partnership between the United States and Vietnam."

Top leaders from the United States and Vietnam discussed the possibility of an aircraft carrier visit last year as part of an effort to further defense relations.

"This is a historic day and we are honored to receive such a warm welcome here," said Rear Adm. John Fuller, the strike group commander. "Also, we'd like to thank Vietnam for the excellent logistical support that makes this visit possible. The United States and Vietnam are cooperating more closely than ever before."

Sailors will participate in cultural and professional exchanges during community service projects, sports competitions, and receptions planned for the port call. Additionally, Navy musicians from the U.S. 7th Fleet Band will perform free concerts for the public.

Carl Vinson is America's third Nimitz-class aircraft carrier with a crew of 5,000 Sailors who support and conduct air operations at sea. The strike group is comprised of a total of 6,000 Sailors, an aircraft carrier, an air wing, a cruiser and two destroyers.

The carrier group's deployment marks the second time it is operating in the Indo-Pacific region under U.S. 3rd Fleet's command and control. U.S. 3rd Fleet's control of ships and aircraft across the Western Pacific and beyond the international dateline to India, enables U.S. 3rd and 7th Fleet to operate together across a broad spectrum of maritime missions in the region.