UK and French Forces Train for Hurricane Relief in the Caribbean 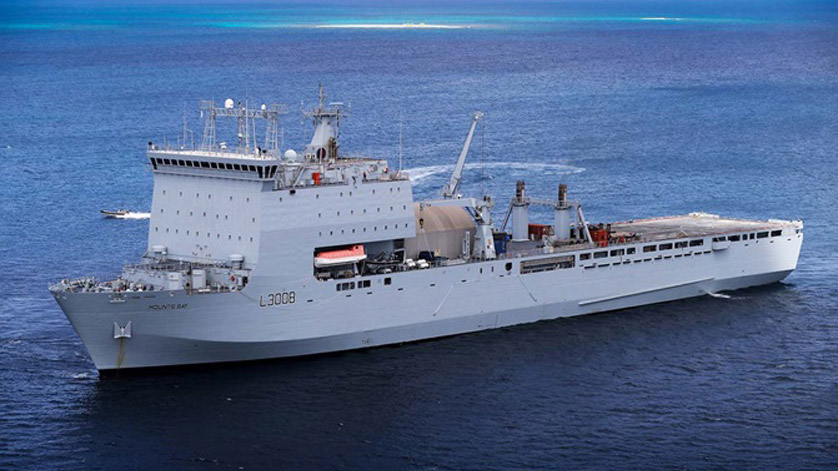 One year on from the devastating impact of Hurricanes Irma and Maria in the Caribbean, Royal Naval auxiliary ship RFA Mounts Bay has landed a team of UK military personnel ashore in Martinique to train in hurricane relief with their French counterparts.

Currently midway through her three-year deployment to the region, the Royal Fleet Auxiliary ship has been playing host to the Humanitarian Assistance and Disaster Relief (HADR) Troop who have been sent out to the region to cover the six months of core hurricane season.

The team of 19 Royal Engineers from the British Army and Royal Marines joined up with Noir 30 Platoon from 1 Company, 13eme Régiment du Génie (Engineer Regiment) to be put through their paces in a wide-ranging training package, Exercise Waterloo Sunset.

The time onshore saw both nation’s troops get involved with jungle-tracker training, share experience in a range package using both French and British weapons, and culminating in an earthquake scenario exercise on the north coast of the Caribbean island.

Sapper Josh Barnes RE, the troop’s only fluent French speaker, described the experience as, “incredibly rewarding, especially when trying to break down the language barrier to reach a common goal.”

Captain Jon Cooke RE, the officer commanding HADR Troop, said, “The final disaster relief exercise really put us through our paces; we were faced with a realistic threat in a challenging environment alongside our French colleagues.

“Given the UK and French presence in the Caribbean, it is important that we understand each other’s capabilities so that we can work together in any future HADR operations.”

Both French and UK teams relished the chance to work together throughout this period, and the personnel from the UK HADR team shared their lessons learnt working from a variety of locations across the Caribbean in the aftermath of last year’s Hurricanes Irma and Maria.