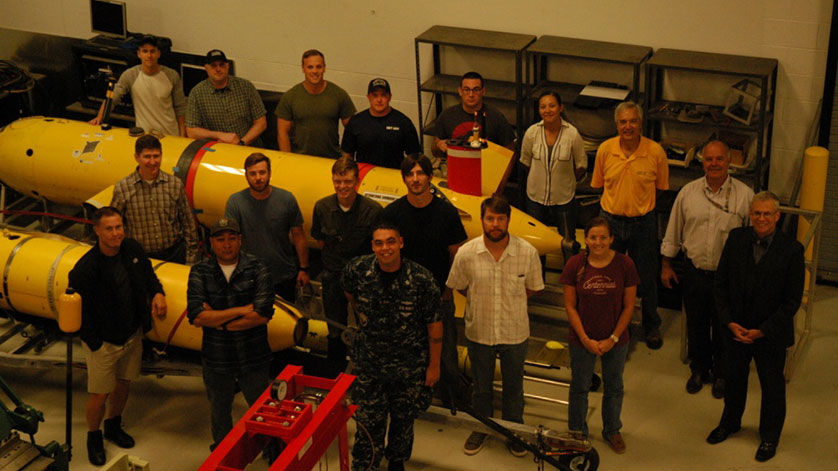 Fifteen students began classes recently at The University of Southern Mississippi (USM), where they are expected to be the first class in the nation to earn a certification in Unmanned Maritime Systems (UMS).

"This program gives us a chance to continually and rapidly train and certify our personnel to be the best in the world even before the race begins," stated Command, Naval Meteorology and Oceanography Command Deputy Commander and Technical Director Dr. Bill Burnett. "Rear Adm. Gallaudet constantly refers to the Chief of Naval Operations urgency about our adversaries 'It's 28-30 in the fourth quarter, and they have the ball,' and we are preparing our defense to quickly innovate, deploy and interoperate air, surface and undersea unmanned systems."

The certification program is the only one of its kind in the U.S. Students will participate in a three-month training cycle, during which they will study nautical science, 3-D positioning, ocean policy, autonomous systems and much more. The UMS program is made up of three tiers including "novice," "journeyman" and "expert" levels.

The program's goal is to offer training in the safe and effective use of mission critical UMS. It will also provide leverage between federal agencies, private industry and academic research, all in support of the Gulf of Mexico real-world environment.

USM School of Ocean Science and Technology Directory Monty Graham stated, "The University sees the Unmanned Maritime Systems Certification as a natural extension of decades of collaboration with U.S. Navy. The future of ocean science is clearly heading to more applications of unmanned systems, so we view this not only in the lens of the modern warfighter but also of future ocean scientists. We are excited to be charting this future with Naval Meteorology and Oceanography."

The program was launched amid CNMOC preparations for the Gulf of Mexico Unmanned Systems Operational Demonstration that will take place at the end of May. The final week of the course will be conducted in conjunction with the demonstration, and the graduating class will be presented their Tier 1 certifications by CNMOC Rear Adm. Tim Gallaudet.