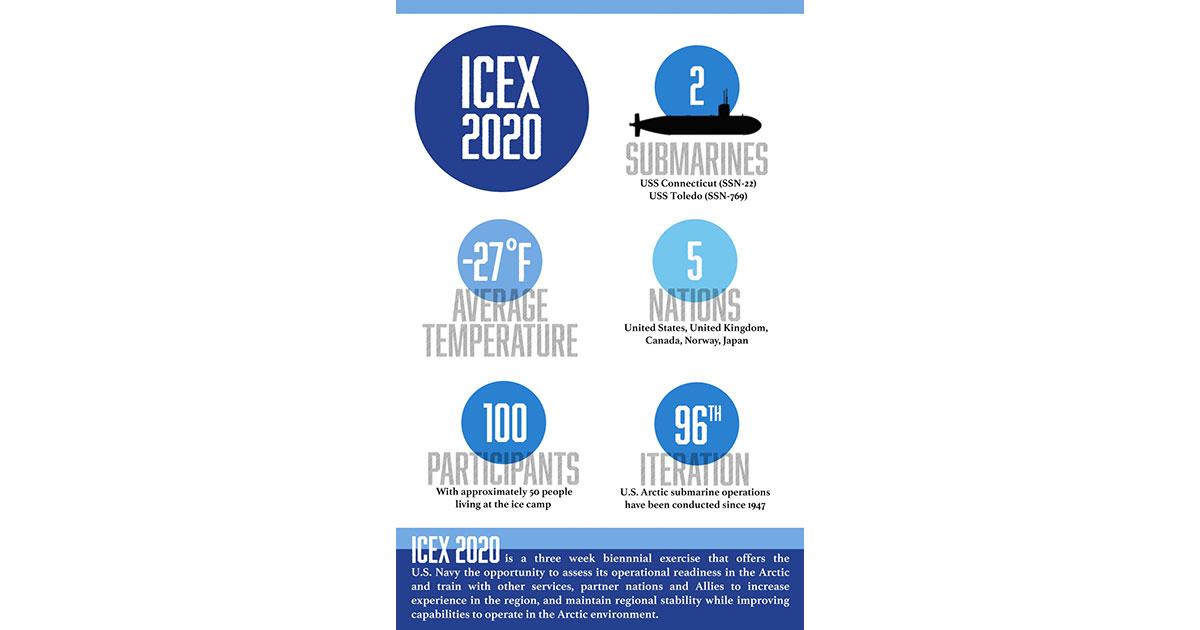 ICEX 2020 is a three week biennial exercise that offers the Navy the opportunity to assess its operational readiness in the Arctic and train with other services, partner nations and Allies to increase experience in the region, and maintain regional stability while improving capabilities to operate in the Arctic environment.

“The Arctic is a potential strategic corridor - between Indo-Pacific, Europe, and the U.S. homeland - for expanded competition. The Submarine Force must maintain readiness by exercising in Arctic conditions to ensure they can protect national security interests and maintain favorable balances of power in the Indo-Pacific and Europe if called upon,” said Vice Adm. Daryl Caudle, Commander, Submarine Forces. “ICEX 2020 provides the opportunity for the Submarine Force to demonstrate combat and tactical readiness for sustained Arctic operations in the unique and challenging Arctic environment.”

The Navy's Arctic Submarine Laboratory (ASL), based in San Diego, serves as the lead organization for coordinating, planning and executing the exercise involving five nations, two submarines and more than 100 participants over the three weeks of operations.

Ice Camp Seadragon is a temporary ice camp that was established on a sheet of ice in the Arctic Ocean, known as an ice floe. Seadragon will serve as a temporary command center for conducting submarine operations and under-ice navigation exercises. The camp consists of shelters, a command center and infrastructure to safely house and support more than 45 personnel at any one time.

The camp gets its namesake from USS Seadragon (SSN-584), the first submarine to transit the Northwest Passage. During the transit, Seadragon conducted the first hydrographic survey of the Northwest Passage and became the first vessel to navigate under an iceberg. Since the success of Seadragon’s Arctic navigation initiatives, Arctic operations have been a crucial part of the missions conducted by nuclear submarines.

For more than 70 years, submarines have conducted under-ice operations in the Arctic region in support of inter-fleet transit, training, cooperative allied engagements and routine operations.