U.S. Navy Develops and Tests Maritime Autonomy in a Box 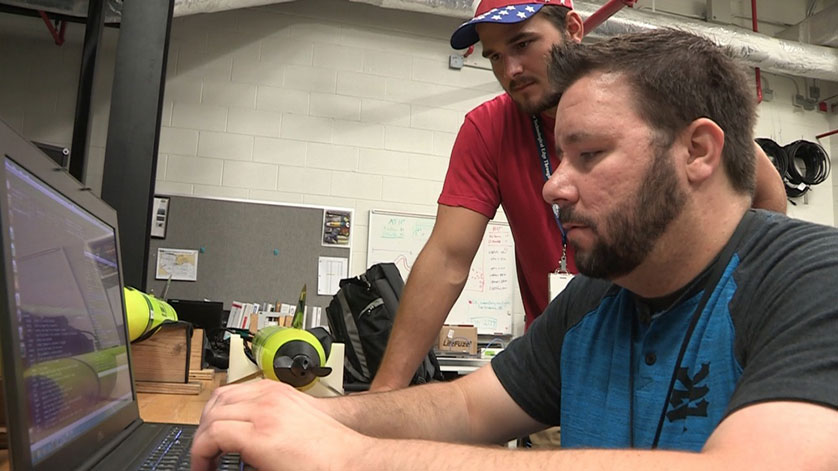 Scientists and engineers at the Naval Surface Warfare Center Panama City Division have developed a way to change unmanned underwater vehicle (UUV) mission information as easily as updating an app on your cell phone.

NSWC PCD Autonomous Systems Engineers, Drs. Matthew Bays and Drew Lucas, refer to the system as "Autonomy in a Box."

Autonomy in a Box is designed to dramatically reduce the level of effort and lead time required to program an UUV's mission.

"Autonomy in a Box is designed to make installing configurations of autonomy software on a vehicle as easy as installing an application from an app store," said Bays.

The goal of Autonomy in a Box is to develop a quickly-deployable software solution to give unmanned systems a basic autonomy capability, support configuration management of an autonomy framework to facilitate easier experimentation and compartmentalize autonomy software development.

Currently, UUVs are a shared asset between many software developers and autonomy protects. When developers write access to their algorithms and operating system, it requires step by step installations before every new test, in addition to a verification process. This effort can take anywhere from days to weeks to perform and at a great cost in both dollar terms and schedule for mission execution.

Bays said Autonomy in a Box makes it significantly easier to install, deploy, reconfigure and test an autonomy solution within an unmanned system in a fraction of the time.

With Autonomy in a Box, NSWC PCD has introduced the use of Docker software pre-developed "containers" to solve this problem. The container itself is basically one large file which allows users to package an application into a standardized unit for software development. These containers condense the software into a complete file system that contains everything it needs to run.

From this, autonomy developers can develop their own Docker containers or work with provided baselines.

"Any group or program that wants to test their autonomy software can get a copy of the base frameworks within a Docker image and integrate their experimental software off-site into the image," said Bays. "After the copy is returned, the integrity of the software would need to be verified with respect to the changes they have made and deploy it onto our unmanned assets."

The same physical platform might be used to perform a different mission, run a different autonomy experiment, or otherwise be modified in configuration from one day to the next by different groups.

"The Autonomy in a Box system facilitates shared-asset scenarios by making it significantly easier to install and re-configure autonomy software," said Lucas.

The Autonomy in a Box system was demonstrated using National Unmanned Systems Shared Resource Center (NUSSRC) vehicles at the Hell Bay IV Trials in Scotland as part of the United Kingdom's Unmanned Warrior exercise in October 2016.

Bays, Lucas and their team are working towards integrating Autonomy in a Box on other NUSSRC assets, developing a topside autonomy testing container, creating more advanced auto-detection features for detecting what type of vehicle the Autonomy in Box software is connected to and automatically configure itself to that vehicle.