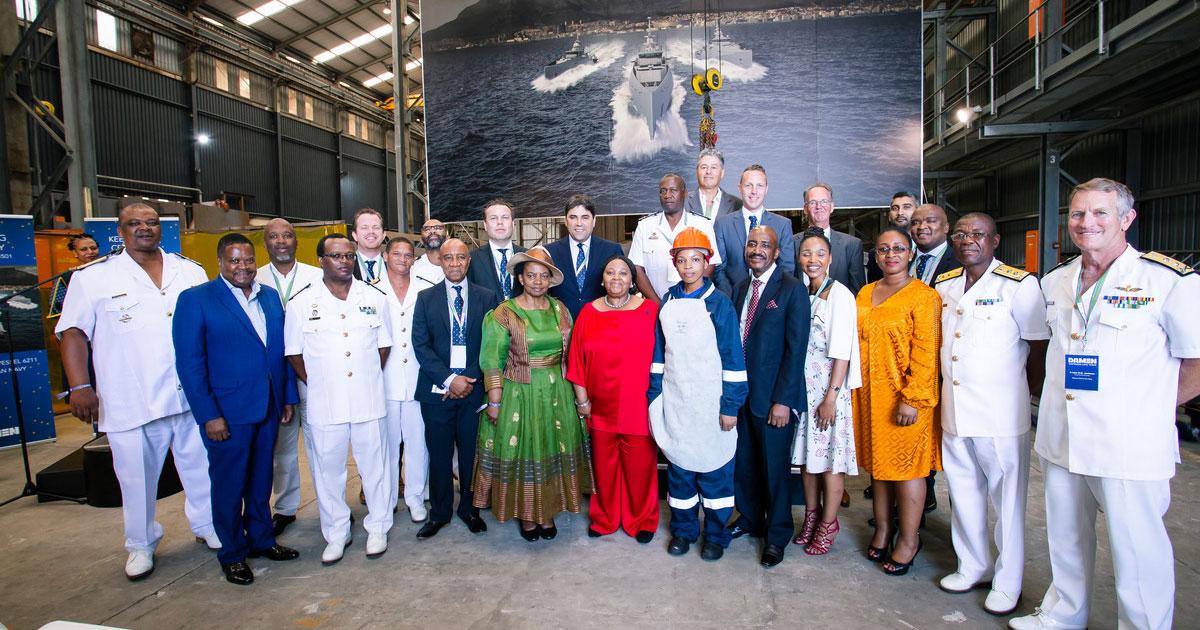 On Saturday, the 23rd of February 2019, Damen Shipyards Cape Town (DSCT) hosted a keel laying ceremony, marking the start of construction on the first of three Multi-mission Inshore Patrol Vessels (MMIPVs) for the South African Navy. These vessels will aid in protecting the country from threats such as trafficking, illegal fishing and piracy, as well as support job creation and enterprise development.

The keel laying ceremony is a maritime tradition that dates back to the times of wooden ships and is said to bring luck to the ship during construction and to the captain and crew during the vessel’s later life. The tradition involves placing a newly minted coin under the keel (the primary structural backbone of the ship around which the hull is built) and building over it.

The coin laid at the DSCT event was a commemorative medal made in honor of the late President Nelson Mandela’s 1993 Nobel Peace Prize win. The coin was placed under the keel by the Minister of Defence and Military Veterans, Nosiviwe Mapisa-Nqakula. The keel bar was then lowered on top of the coin and welded into the structure – a privilege that went to Nobelungu Tshangase from Velddrif on the West Coast who is one of the top performing apprentices at Damen’s training school. The training school has since inception in 2010 educated 150 young people from previously disadvantaged communities and recently enrolled a new class of 10.

Addressing the event which was attended by several members of parliament, dignitaries, Armscor and South African Navy personnel, DSCT Director, Sam Montsi, said: “The event today signifies the start of the building of the first MMIPV. Over the years, our shipyard has undertaken many projects for local and international clients but none as significant as the MMIPV project. The MMIPV’s will be built and delivered within the agreed specifications, timelines, and budgets.

“In addition, more than one million man-hours of work will be created during the construction of the MMIPVs. This project will sustain and/or create more than 1,000 direct and indirect jobs.

“We are also supporting and facilitating opportunities for local businesses. We will be working with these Small Medium and Micro Enterprises to improve their performance which will lead to improvements in their product or service offering, business processes, lead times and delivery. This will ensure that non-traditional suppliers cease to operate on the peripheries of the formal economy and increasingly become more sustainable. Over and above this, we are striving to optimize local content”.

Arnout Damen, Chief Commercial Officer of the Damen Shipyard Group added: “The Group is immensely encouraged by the award of the MMIPV contract to Damen Shipyards Cape Town. The Group stands by the shipyard and will work with the local teams including Armscor and the South African Navy to ensure that the MMIPVs are built to the highest standard and delivered on time. It is our intention to ensure that at the end of the project we have achieved significant transfer of technology and skills, as well as facilitated growth of enterprises as envisioned in these imperatives.

“I can assure the gathering that there are indeed great opportunities to be realized in the Blue Economy. However, exploiting these, in my humble view, will be greatly facilitated by careful planning and constructive engagements between the Government and its various organs on the one hand, and the private sector on the other. The Damen Shipyards Group has expertise and experiences that can be instructive in this regard. In a few countries where we are involved in shipyards and dockyards, we have successfully facilitated the development and growth of the shipbuilding industry and revitalization of dockyards in collaboration with national navies and other parties. We are willing to engage with the Government and other relevant bodies to explore how we can assist in this initiative.”

The Minister stated that the MMIPVs will be work horses of the South African Navy, reducing the load off the Navy’s existing fleet of frigates. “While prevalence of piracy has somewhat declined, the extent of maritime crime observed – including trafficking, illegal fishing and smuggling – has been on the increase indicating that the maritime domain lacks law enforcement. The new vessels would be well suited to this task.

The MMIPVs expanded capacity will enable South Africa to mount cheaper, more focused and more effective missions and operations against the above-mentioned threats and challenges it encounters in its maritime domain, especially illegal fishing and trafficking. This improved capacity will be of immediate and immense national benefit. Of particular interest will be the possible impact on maritime security in the Southern African Development Community, the rest of Africa and beyond”.

“With the building of the patrol vessels, we are demonstrating that we are truly an industrial powerhouse and most importantly, highlighting that the South African Defence Industry has the requisite capabilities and capacity, and that government spending has a positive socio-economic spin off on our society at large.”

“The President of the Republic, in his now famous ‘Thuma Mina Campaign’, has invited everybody to step forward in their areas of strength and assist him and the Government in rebuilding the economy and creating opportunities for our people. I want to say to the President and to the Government, that DSCT and the Global Damen Group are stepping forward, we are raising our hands and saying: in the Blue Economy ‘thuma thina’, send us. We have the expertise, we have the technologies, we have the infrastructure, we have global experiences, and we can facilitate financial resources to help South Africa exploit the massive opportunities presented by the country’s Blue Economy,” concluded Montsi.

The first vessel is due to be completed by mid-2021 and start serving the people of South Africa. The second and third are scheduled for delivery in 2022 and 2023, respectively.