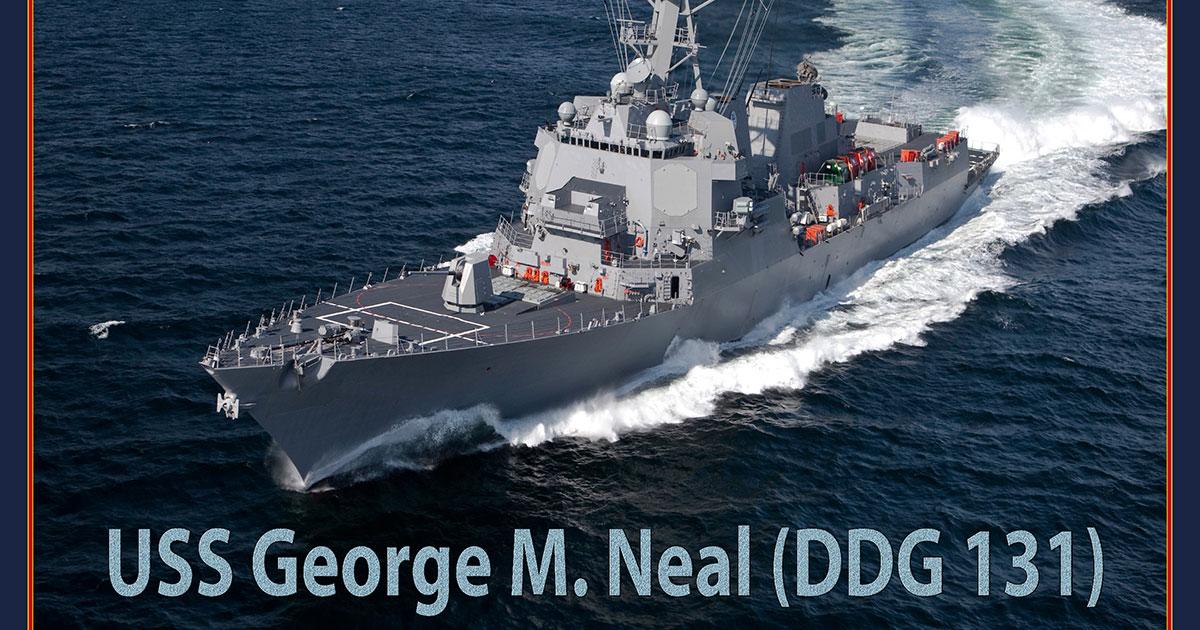 “At significant risk to his personal safety, Petty Officer Neal distinguished himself by volunteering to go into harm’s way into North Korea to rescue a fellow service member,” said Spencer. “He was a hero, and I am proud his legacy will live on in the future USS George M. Neal (DDG 131).”

Neal was awarded the Navy Cross for his actions on July 3, 1951, when, while serving with Helicopter Utility Squadron ONE, he and pilot Lt. j.g. John Koelsch attempted to rescue Marine Corps Captain James Wilkins. Wilkins crashed near Yondong in North Korea after his Corsair took antiaircraft fire.

Keolsch and Neal located Wilkins and under increased enemy fire lowered the rescue sling, however the helicopter was soon disabled and crashed. For nine days, Neal assisted Keolsch and Wilkins in evading enemy forces before being captured and held as a Prisoner of War. Keolsch died during captivity but Wilkins and Neal were released and returned to the United States with more than 320 fellow POWs in 1952.

Arleigh Burke-class destroyers conduct a variety of operations from peacetime presence and crisis response to sea control and power projection. The future USS George M. Neal (DDG 131) will be a Flight III destroyer capable of fighting air, surface and subsurface battles simultaneously, and will contain a combination of offensive and defensive weapon systems designed to support maritime warfare, including integrated air and missile defense and vertical launch capabilities.

The ship will be constructed at Huntington Ingalls in Pascagoula, Mississippi. The ship will be 509 feet long, have a beam length of 59 feet and be capable of operating at speeds in excess of 30 knots.