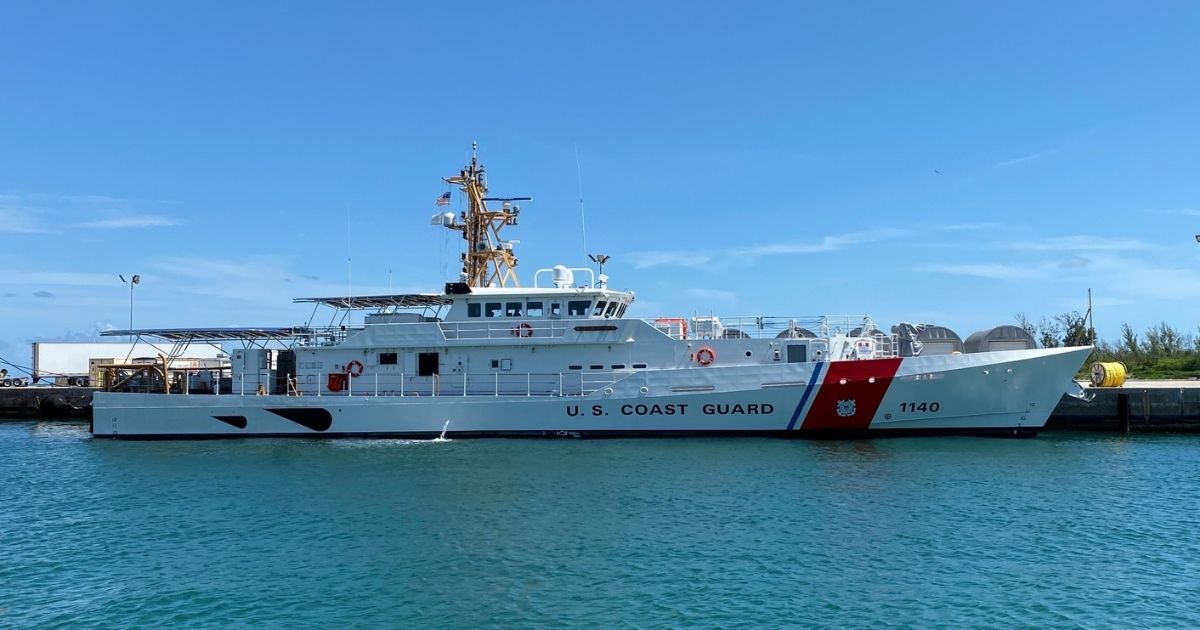 Together with the FRCs currently based in Apra Harbor, Guam, these Cutters will help the United States challenge Chinese aggression, maintain the United States’ commitment to peace and prosperity, and ensure that America remains the partner of choice in the region.

“As the Coast Guard continues to evolve to meet the most pressing maritime and national security threats of the day—be it IUU fishing, piracy, drug or human trafficking—a larger fleet and expanded presence of American-made white hulls with red racing stripes around the globe will help further the regional partnerships and alliances necessary to curb the creeping influence of America’s strategic competitors and adversaries and reaffirm its continued leadership and commitment to rules-based order and maritime governance around the world,” said Ben Bordelon, President & C.E.O of Bollinger Shipyards and Chairman of the Shipbuilders Council of America. “Should the proposed feasibility study demonstrate a need for additional FRCs, Bollinger Shipyards and the maritime defense industrial base stand ready to construct and deliver the high-quality and high-endurance vessels necessary to carry out and perform the mission at hand.”

Earlier this year, Bollinger Shipyards delivered the USCGC OLIVER HENRY to the U.S. Coast Guard, which is the second of three FRCs to be home-ported in Apra Harbor, Guam, in support of Operation Aiga, which is an effort to strengthen island nations in Oceania, including through fishery patrols and enforcement. This USCGC marked the 163rd vessel Bollinger has delivered to the U.S. Coast Guard in its 35-year period and the 40th FRC delivered under the current program. Commandant of the Coast Guard Adm. Karl Schultz has acknowledged the importance of the Guam homeporting, saying, “by placing an ocean-going Coast Guard buoy tender and FRCs, we will promote ‘rules-based order,’ build capacity and affirm the United States’ positive and enduring role in the region.”

In the feasibility study announcement, National Security Advisor O’Brien explains the rationale for the study’s launch by saying, “The USCG continues to modernize and enhance the capabilities of its fleet of major cutters, which play a prominent role in protecting our vital national interests, and where appropriate, those of our partners in the region. To that end, the USCG is strategically homeporting significantly enhanced Fast Response Cutters, built in a proven Louisiana-based shipyard, in the western Pacific.”

O’Brien states that the new generation of Fast Response Cutters will “conduct maritime security missions, such as fisheries patrols, enhance maritime domain awareness and enforcement efforts in collaboration with regional partners who have limited offshore surveillance and enforcement capacity, and ensure freedom of navigation…Enhancing the presence of the USCG in the Indo-Pacific ensures the United States will remain the maritime partner of choice in the region.”

Bordelon continued, “Bollinger is honored to support and enhance the Coast Guard’s operational presence and mission in the Indo-Pacific region. Building quality vessels for the U.S. Coast Guard provides critical assets to bolster our national security interests, both domestic and abroad. We are proud and humbled to be partners in the FRC program.”

The FRC program has had a total economic impact of $1.2 billion since inception in material spending and directly supports more than 650 jobs in south Louisiana. The program has indirectly created 1,690 new jobs from operations and capital investment and has an annual economic impact on GDP of $202 million, according to the most recent data from the U.S. Maritime Administration (MARAD) on the economic Importance of the U.S. Shipbuilding and Repair Industry. Bollinger sources over 271,000 different items for the FRC consisting of 282 million components and parts from 965 suppliers in 37 states. The FRC is one of many U.S. Government shipbuilding programs that Bollinger is proud to support. In addition to the design and construction of the FRC, Bollinger is participating in Industry Studies for five Government programs, including the U.S. Coast Guard’s Offshore Patrol Cutter (OPC) program, the U.S. Navy’s Common Hull Auxiliary Multi-Mission Platform (CHAMP) program, the U.S. Navy’s Auxiliary General Ocean Surveillance (T-AGOS(X)) program, the U.S. Navy’s Large Unmanned Surface Vehicle (LUSV) program and the U.S. Navy’s Light Amphibious Warship (LAW) program.