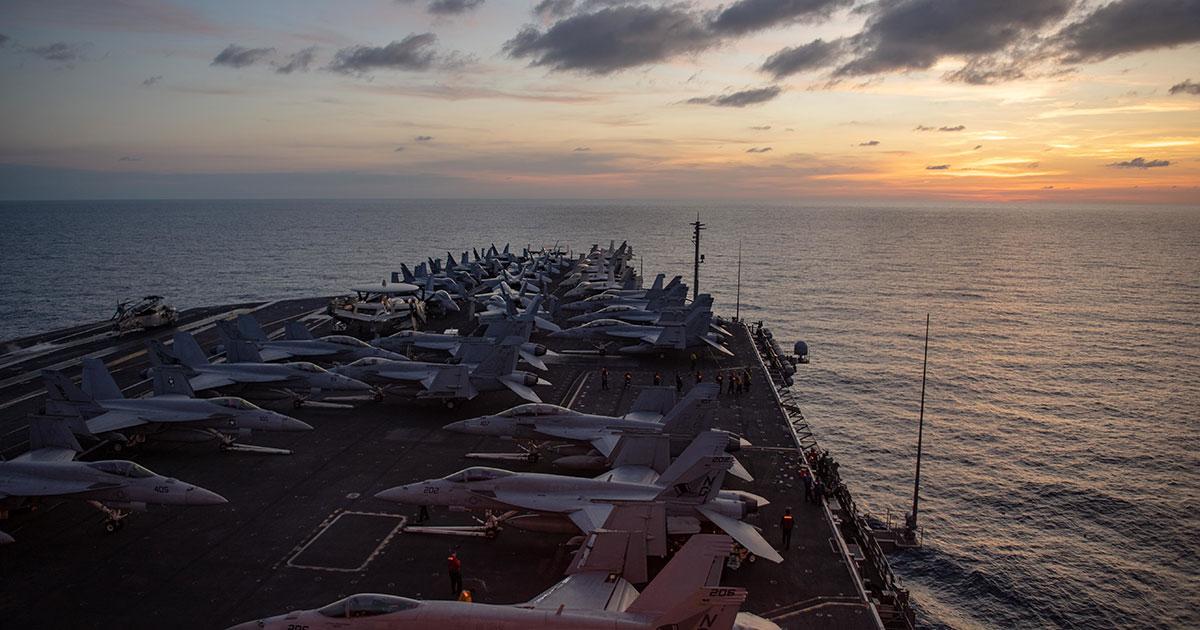 In recent public appearances, U.S. Secretary of State, Mike Pompeo has been emphasizing his nation’s commitment to preventing any blockade of the South China Sea. 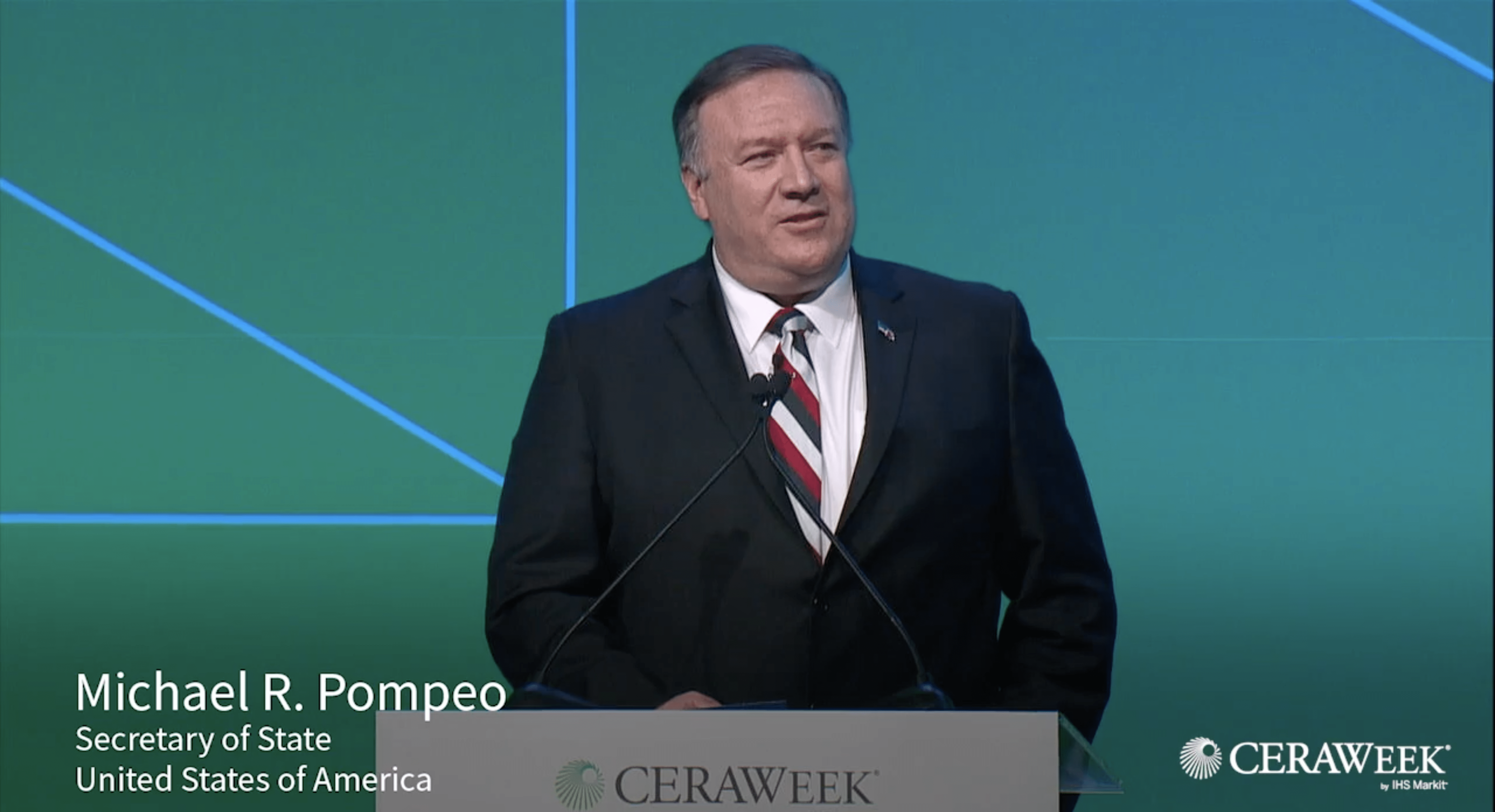 U.S. Secretary of State Mike Pompeo addresses the audience at the CERAWeek energy conference in Houston, Texas on March 12

Pompeo followed this up with a keynote speech at the CERAWeek energy conference in Houston, Texas on March 12, when he said, “China’s illegal island-building in international waterways isn’t simply a security matter. By blocking development in the South China Sea through coercive means, China prevents ASEAN members from accessing more than $2.5 trillion in recoverable energy reserves. To contrast, the United States Government promotes energy security for those Southeast Asian nations. We want countries in the region to have access to their own energy.”

Pompeo has a background in the oil industry and aside from touting the recent emergence of the U.S. as the world’s top energy producer, he told the CERAWeek audience, “I spent a fair amount of time in the oil and gas industry. I ran a small company. It was called Sentry International. We made and sold mud pumps and swivels and hook blocks and downhole equipment, and we distributed sucker rod, so I know the industry well, the whole nine yards in oil and gas . . .”

He stressed that energy and diplomacy are interrelated issues, saying “Our plentiful oil supplies allow us to help our friends secure diversity for their energy resources.”

Asked how he sees the role of the U.S. in the Indo-Pacific in terms of the overall growing competition in the region, Pompeo said, “The challenge that’s presented to America and to the world by China is different than one that we’ve confronted before. Our National Security Strategy defines how we think about China in the Trump administration. There are many differences, but one of the most fundamental is we’ve never had another country of the scale of China, with the military of the scale of China’s, that has now expanded into space and property that they do not have a lawful claim to, but with which America has such a deep, intertwined economic and commercial set of relationships. It was often the case, as it is with certain countries today, that we don’t have those commercial relationships, so we move away and try and drive them out of the marketplace. China is more complicated and more difficult, but no less challenging to ensuring that America’s wealth creation engine is around 10 and 20 and 30 years from now.

In the Indo-Pacific proper, I don’t travel to any country in Asia, South Asia, Southeast Asia where energy isn’t a topic. I will be honest; where – depending on where I am, they mention it either in public or in private. Many of them don’t have the capacity on their own to stand up to the coercive behavior of China, where China moves in and attempts to use its economic clout to influence and control their government. They all welcome companies from the United States. They welcome American capacity for the rule of law. They may not always say this, they may not always speak their mind publicly, but know that I have literally not met a single one of those countries or leaders from one of those countries that didn’t want a more American opportunity, more American resources, more American technology and innovation as part of the mix.”

The following are excerpts from an interview with Secretary Pompeo, conducted by Buena Bernal of Channel News Asia, which took place on 1 March 2019.

QUESTION: The Philippines under President Rodrigo Duterte has what it calls a constructive strategy in dealing with China – enhancing trade and economic ties while refusing to raise its victory before an international arbitral tribunal that favors its South China Sea claim. The Philippines is sending a ship to the Chinese Navy’s anniversary this April, and it’s also had a framework on a possible joint oil and gas exploration. Do you think this strategy is effective?

When it comes to China, we’re perfectly prepared to let China compete all across the world. But when they do so it needs to be done in a free, open, transparent way. This is part of the United States Indo-Pacific strategy. We’re a Pacific nation. We value these open trading lanes. We value the security of the Philippine people, and we have a mutual defense agreement that provides for that. America is committed to this. We continue to be committed to supporting the Philippine people in their own security so that they can grow their economy as well.

Every nation gets to make its own sovereign decisions about how to proceed with respect to China. Our task is to make sure that America is there competing and that when that competition takes place it happens in a way that is fair and open and transparent.

QUESTION: How do you respond to criticism that U.S. freedom of navigation exercises in the South China Sea is a security risk to the Philippines and to Southeast Asia by angering or provoking China?

SECRETARY POMPEO: Yeah, I just see them as just the opposite of that. What they do is they provide assurances, certainly to the Philippines but other countries that border this important navigational waterway, to know that we’re going to make sure that those waterways are open and so that trade can continue. Each of our countries thrives when we exchange goods and resources and technology, and to do that China can’t claim all of the – all of the water. They can’t claim an ocean. That’s not the way international law works, and it is not good for the world. The United States is determined to ensure that these waterways remain open and our freedom of navigation exercises are an element of that.

QUESTION: The Philippines defense department wants a review of the Mutual Defense Treaty to either maintain, scrap, or strengthen it. What is the U.S. take on the review?

SECRETARY POMPEO: We look at every agreement constantly to make sure it makes sense in modern times. Some of these agreements take on age. It’s worth taking a look. But I am convinced that the agreement that we have is important and we ought to make sure that it’s right. But even a greater and more significant element of our relationship is the commitment that the two countries have – the understanding, the interrelationships, not only security but economic relationships between our two countries, all of the Filipino citizens that work and live and prosper inside of the United States. These are the things that will assure security for our two countries. And if there are those who think we ought to evaluate the mutual defense agreement, so be it.

QUESTION: Perhaps as a last question, I know you’ve spoken about this in your press conference, but just to be clear, will the U.S. come to the Philippines’ defense if maritime confrontations over the South China Sea occur?

SECRETARY POMPEO: The South China Sea is certainly part of the threat prospects for this region. We have a defense agreement; it’s very clear about the obligations that each of our two countries have, and America is fully committed to those requirements and those obligations.