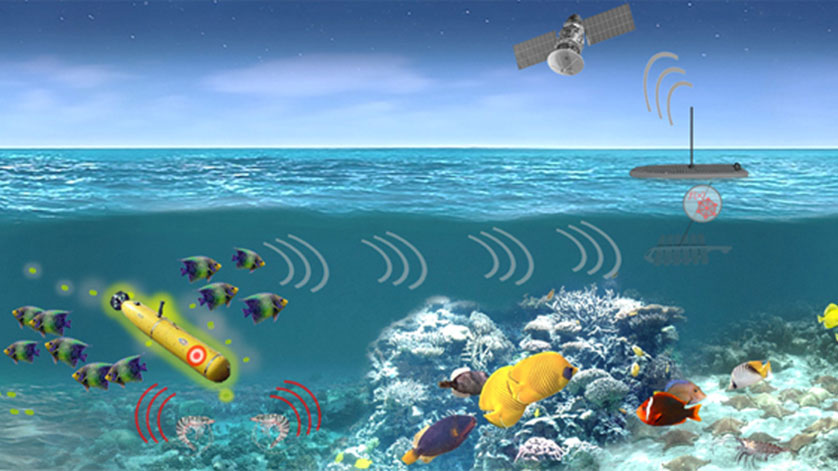 The world’s vast oceans and seas offer seemingly endless spaces in which adversaries of the United States can maneuver undetected. The U.S. military deploys networks of manned and unmanned platforms and sensors to monitor adversary activity, but the scale of the task is daunting and hardware alone cannot meet every need in the dynamic marine environment.

Sea life, however, offers a potential new advantage. Marine organisms are highly attuned to their surroundings—their survival depends on it—and a new program out of DARPA’s Biological Technologies Office aims to tap into their natural sensing capabilities to detect and signal when activities of interest occur in strategic waters such as straits and littoral regions.

The Persistent Aquatic Living Sensors (PALS) program, led by program manager Lori Adornato, will study natural and modified organisms to determine which ones could best support sensor systems that detect the movement of manned and unmanned underwater vehicles. PALS will investigate marine organisms’ responses to the presence of such vehicles, and characterize the resulting signals or behaviors so they can be captured, interpreted, and relayed by a network of hardware devices.

“The U.S. Navy’s current approach to detecting and monitoring underwater vehicles is hardware-centric and resource intensive. As a result, the capability is mostly used at the tactical level to protect high-value assets like aircraft carriers, and less so at the broader strategic level,” Adornato said. “If we can tap into the innate sensing capabilities of living organisms that are ubiquitous in the oceans, we can extend our ability to track adversary activity and do so discreetly, on a persistent basis, and with enough precision to characterize the size and type of adversary vehicles.”

Beyond sheer ubiquity, sensor systems built around living organisms would offer a number of advantages over hardware alone. Sea life adapts and responds to its environment, and it self-replicates and self-sustains. Evolution has given marine organisms the ability to sense stimuli across domains—tactile, electrical, acoustic, magnetic, chemical, and optical. Even extreme low light is not an obstacle to organisms that have evolved to hunt and evade in the dark.

However, evaluating the sensing capabilities of sea life is only one of the challenges for PALS researchers. Performer teams supporting DARPA will also have to develop hardware, software, and algorithms to translate organism behavior into actionable information and then communicate it to end users. Deployed hardware systems operating at a standoff distance of up to 500 meters must collect signals of interest from relevant species, process and distill them, and then relay them to remote end users. The complete sensing systems must also discriminate between target vehicles and other sources of stimuli, such as debris and other marine organisms, to limit the number of false positives.

Adornato is aiming to demonstrate the approach and its advantages in realistic environments to convey military utility.

“Our ideal scenario for PALS is to leverage a wide range of native marine organisms, with no need to train, house, or modify them in any way, which would open up this type of sensing to many locations,” Adornato said.

DARPA favors proposals that employ natural organisms, but proposers are able to suggest modifications. To the extent researchers do propose solutions that would tune organisms’ reporting mechanisms, the proposers will be responsible for developing appropriate environmental safeguards to support future deployment. However, at no point in the PALS program will DARPA test modified organisms outside of contained, biosecure facilities.