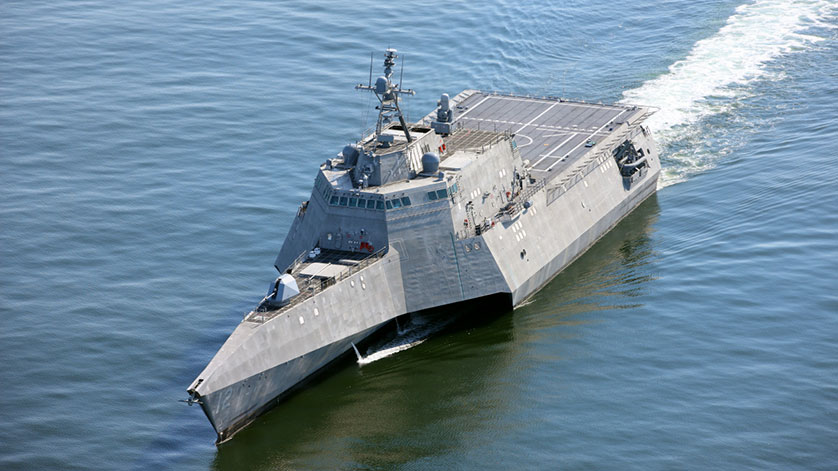 The Navy will commission its newest Independence-variant littoral combat ship (LCS), the future USS Omaha (LCS 12), during a noon PST ceremony Saturday, Feb. 3, at the Broadway pier in San Diego.

The future USS Omaha, designated LCS 12, is the 11th littoral combat ship to enter the fleet and the sixth of the Independence-variant design. It is the fourth warship named for the Nebraska city. The first ship was a propeller-driven sloop-of-war. The second ship was a light cruiser and the third Omaha was an attack submarine.

Former U.S. Senator from Nebraska, 35th Governor of Nebraska and Medal of Honor recipient, the Honorable Bob Kerrey will deliver the ceremony's principal address. Mrs. Susie Buffett, an Omaha philanthropist and daughter of Warren Buffett, chairman and chief executive of Berkshire Hathaway Inc., will serve as the ship's sponsor. In a time-honored Navy tradition, she will give the order to, "man our ship and bring her to life!"

"Omaha and her sister ships represent an investment in our nation, the result of the partnership between the Department of the Navy and our shipbuilding industry. American craftsmen in Mississippi, Alabama, around the country have made USS Omaha possible" said Secretary of the Navy Richard V. Spencer. "The LCS fills a unique mission for the United States Navy and as these remarkable ships continue to be produced out of our shipyards, they represent an increase in our readiness and lethality."

LCS is a modular, reconfigurable ship, designed to meet validated fleet requirements for surface warfare (SUW), anti-submarine warfare (ASW) and mine countermeasures (MCM) missions in the littoral region. An interchangeable mission package is embarked on each LCS and provides the primary mission systems in one of these warfare areas. Using an open architecture design, modular weapons, sensor systems and a variety of manned and unmanned vehicles to gain, sustain and exploit littoral maritime supremacy, LCS provides U.S. joint force access to critical areas in multiple theaters.

The LCS-class consists of the Freedom-variant and Independence-variant, designed and built by two industry teams. The Freedom-variant team is led by Lockheed Martin (for the odd-numbered ships, e.g. LCS 1). The Independence-variant team is led by Austal USA (for LCS 6 and follow-on even-numbered ships). Twenty-nine LCS ships have been awarded to date: 11 have been delivered to the Navy, 15 are in various stages of construction and three are in pre-production states.

The ceremony can be viewed on the Navy Live blog here.

Additional information about the future USS Omaha (LCS 12) can be found online here.