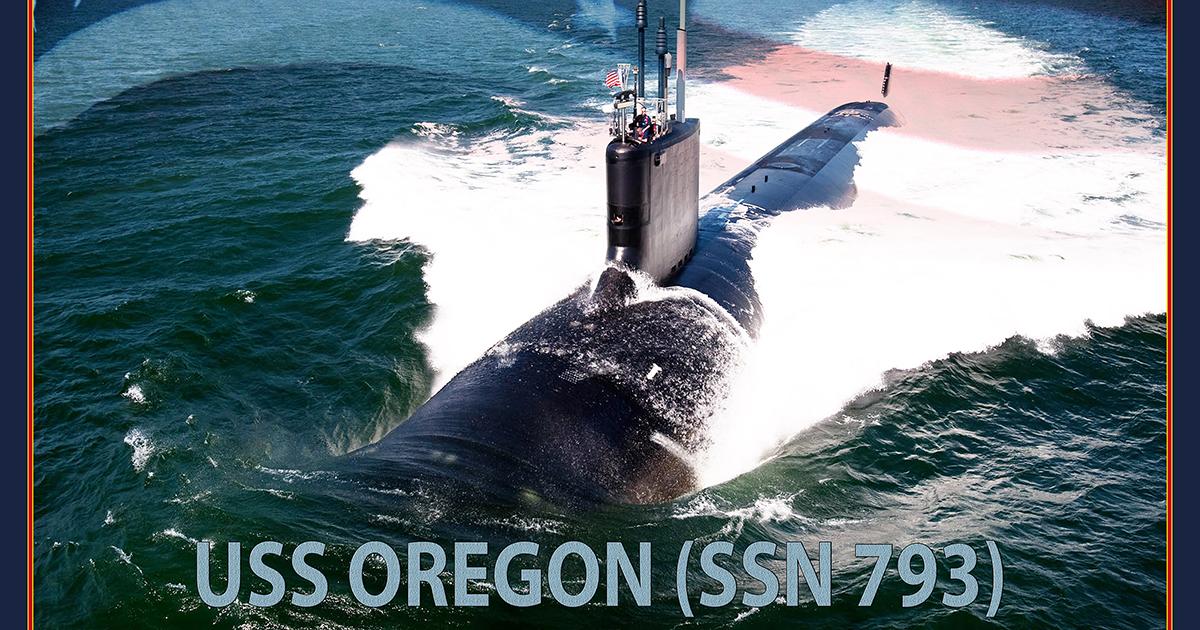 Rep. Greg Walden of Oregon will deliver the ceremony's principal address. The submarine's sponsor is Dana Richardson. The ceremony will be highlighted by Richardson breaking a bottle of sparkling wine across the bow to formally christen the ship, a time-honored Navy tradition.

"The future USS Oregon will play an important role in the defense of our nation and maritime freedom," said Secretary of the Navy Richard V. Spencer. "She stands as proof of what teamwork — from civilian to contractor to military — can accomplish. I am confident USS Oregon and her crew will ensure our Navy remains safe and strong to proudly serve our nation's interest for decades to come."

Oregon, a Virginia-class submarine designated SSN 793, is the third U.S. Navy ship to honor the state. The first USS Oregon was a brigantine ship purchased in 1841 and used for exploration until 1845. The second Oregon (Battleship No. 3) was commissioned July 15, 1896.

Known for one of the most dramatic voyages ever undertaken by a ship of the U.S. Navy, Oregon sailed over 14,000 miles in 66 days, leaving San Francisco in 1898 and travelling south through the Straits of Magellan until finally arriving at Jupiter Inlet, Florida, where she reported for battle in the Spanish-American War. While the ship demonstrated the capabilities of a heavy battle ship, it also eliminated any opposition to the construction of the Panama Canal, as the country could not afford two months to send warships from one coast to another in times of emergency. Decommissioned in 1906, she was later recommissioned in 1911, and remained in the reserve, until stricken from the Navy list in 1942.

Oregon (SSN 793) is the 20th Virginia-class attack submarine and the second Virginia-class Block IV submarine. The ship's construction began in the fall of 2014, and it is expected to be delivered in the fall of 2020. Oregon will provide the Navy with the capabilities required to maintain the nation's undersea superiority well into the 21st century.