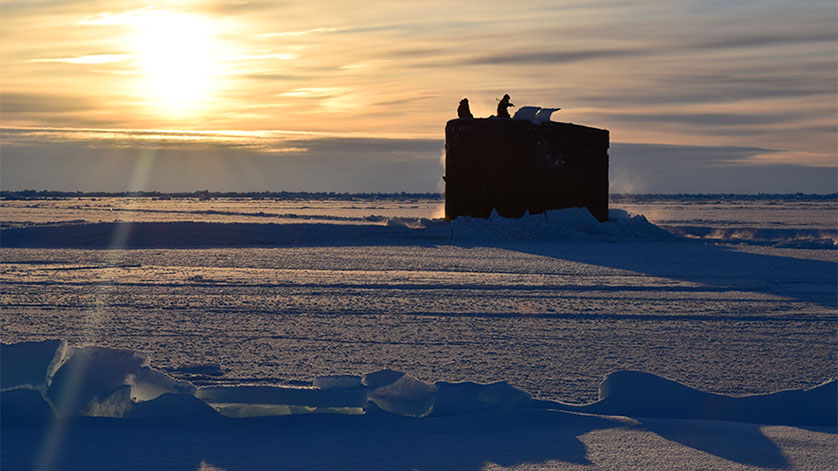 ICEX 2018 is a five-week biennial exercise that allows the Navy to assess its operational readiness in the Arctic, increase experience in the region, advance understanding of the Arctic environment and continue to develop relationships with other services, allies and partner organizations.

"With every ICEX we are able to build upon our existing experience and continue to learn the best way to operate in this unique and harsh environment," said Rear Adm. James Pitts, commander, Undersea Warfare Development Center (UWDC). "We are constantly testing new tactics, techniques and procedures (TTP) under the ice, and this exercise allows us to do so on a larger scale and alongside our U.K., joint and academic partners."

The Navy's Arctic Submarine Laboratory (ASL), based in San Diego, serves as the lead organization for coordinating, planning and executing the exercise involving three nations services, three submarines and over 100 participants over the five weeks of operations.

Ice Camp Skate is a temporary ice camp that was established on a sheet of ice in the Arctic Ocean, known as an ice floe. Skate will serve as a temporary command center for conducting submarine operations, including under-ice navigation and torpedo exercises. The camp consists of shelters, a command center and infrastructure to safely house and support more than 50 personnel at any one time.

"Our Arctic Submarine Laboratory team has been working for over a year to ensure our Submarine Force is able to conduct dynamic torpedo and under-ice operations in this unique environment," says Larry Estrada, director of ASL. "This year's camp is prepared to support the force with communication and weapons recovery."

For more than 70 years, submarines have conducted under-ice operations in the Arctic regions in support of inter-fleet transit, training, cooperative allied engagements and routine operations.

The U.S. Submarine Force has completed more than 27 Arctic exercises; the last being conducted in 2016.