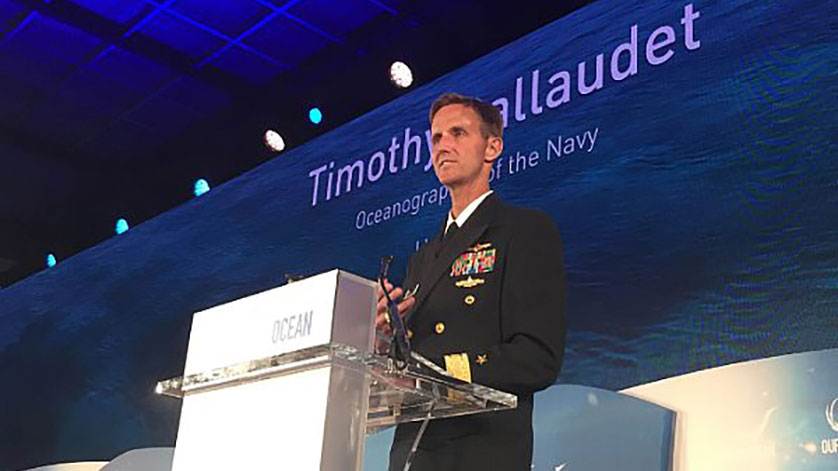 The Office of the Oceanographer of the Navy, under direction from the Chief of Naval Operations, announced the establishment of Task Force Ocean, March 24.

This new task force is part of an effort to further assess the state of ocean science in the Navy, which encompasses its oceanographic infrastructure, technologies, technical workforce and how they are applied to naval operations.

"Cutting edge ocean science underpins the safety and effectiveness of the Navy's operating forces," said Oceanographer of the Navy Rear Adm. Tim Gallaudet. "One of the main drivers that launched Task Force Ocean is the need to advance ocean science that directly helps the U.S. Navy maintain its competitive advantage in the undersea domain. Our overall capabilities are second to none, but the gap is closing and we can't be complacent. It's time to up-our-game to stay ahead of our competitors."

The roadmap will focus on the Navy's capability to observe the ocean environment, process the collected data into products that can be used by operational commanders, and further strengthen the Navy's ocean science technical workforce.

"Through the implementation of the roadmap, our priority is to reinvigorate and reconstitute our technical workforce," said Gallaudet. "We'll be looking at everything from oceanographic survey ships, unmanned vehicles, ocean and acoustic modelling, and how we apply our products to recruiting, educating, developing and retaining our workforce."

"Since the 1840s, the U.S. Navy has consistently been a major force in the advancement of ocean science," Hahn said. "Task Force Ocean will ensure we maintain our historic edge in understanding and predicting the marine environment in support of naval operations in all the world's oceans."

Gallaudet elaborated on the significance of ocean science to the Navy's mission.

"It's hard to believe that in this globally interconnected information age, only five percent of volume of the world's oceans have been explored and only 20 percent of the world's sea floor has been mapped to modern standards. So there's a lot that we don't know. We need to better understand the oceans because that's where the Navy operates," said Gallaudet.