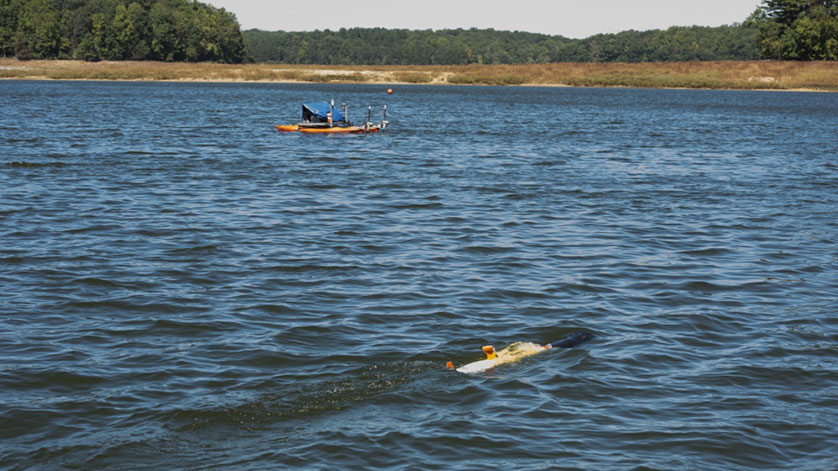 This integrated unmanned demonstration involved NAVOCEANO's parent command, the Naval Meteorological and Oceanography Command (NMOC), and Carderock collaborating on autonomous bathymetry through missions run by NAVOCEANO from Mississippi and supervised by Carderock's Autonomous Vehicle and Instrumentation Group (Code 8633) on station in the Triadelphia Reservoir near Maryland's Brighton Dam. 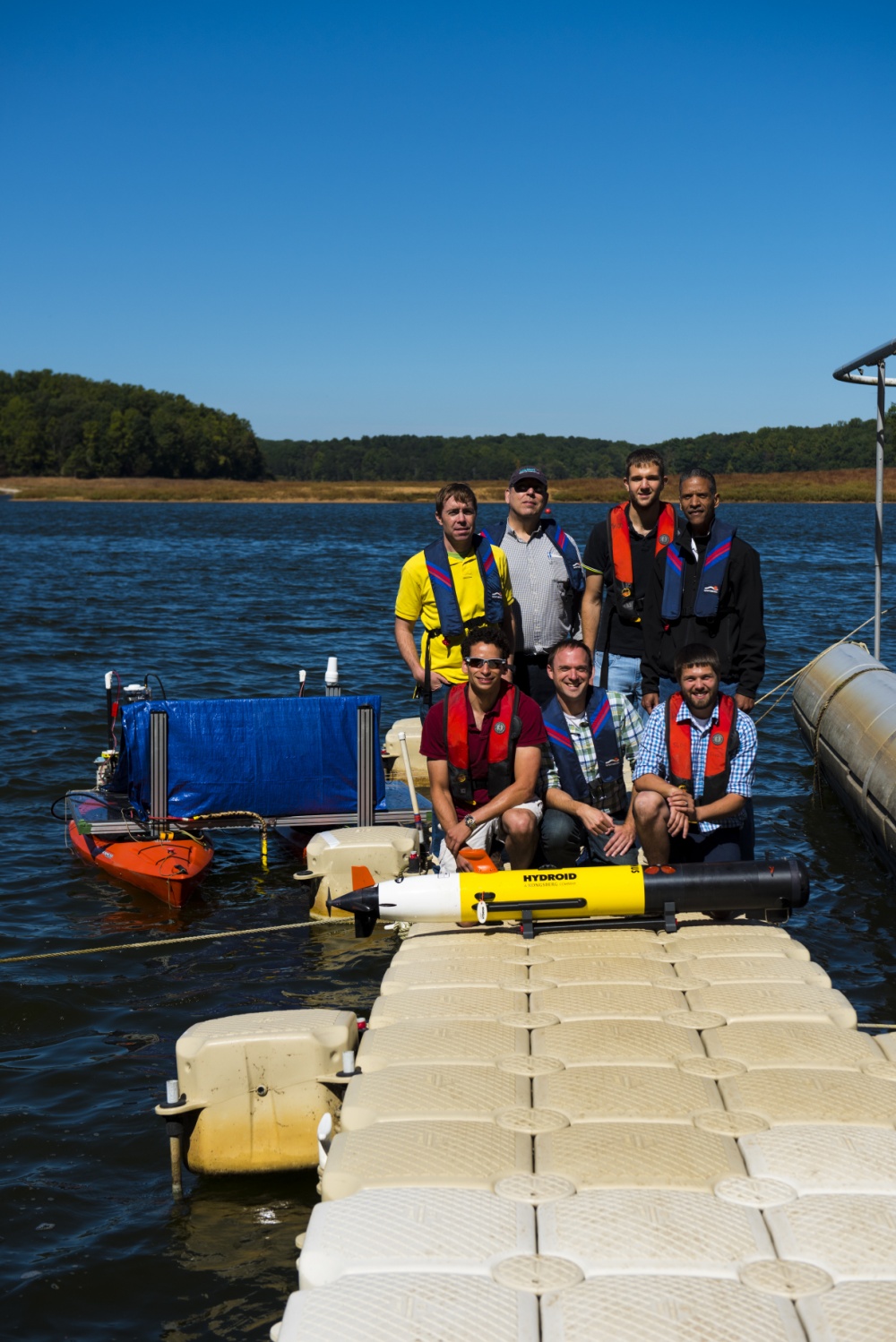 According to Jim Rice, Code 8633 group leader, the group teamed with NMOC to develop the capability of communicating with an unmanned underwater vehicle (UUV) during submerged operation from a shore station using an unmanned surface vehicle (USV) as a communications relay. The two parties signed a memorandum of understanding (MOU) in August planning this collaborative autonomous demonstration using a kayak catamaran USV developed by the Autonomous Vehicle and Instrumentation Group and a Remus 100 UUV with side-scan sonar capability provided by NMOC, with the USV and remote shore station in Mississippi linked via satellite connection.

"The purpose of this project is to demonstrate the capability of getting data status updates and mission re-direct commands between a submerged UUV and a remote shore station using a USV relay," Rice said. "What we are offering them now is a more continuous communication path and ability to control and change the UUV's mission via the USV, or have more constant updates of where the UUV is, what it's doing and what its condition is."

The demonstration was carried out via preprogrammed missions in the reservoir, with the UUV running east to west and back taking oceanographic measurements in the reservoir for about a half hour while being autonomously trailed at a safe distance by the USV. The two vehicles communicated regularly via acoustic modem, with the USV providing guidance updates to the UUV and relaying UUV sensor data via satellite link to NMOC.

Matt Greytak, a control systems engineer assigned to Carderock's Ship Control Branch (Code 861), developed the USV autonomy algorithm used in the demonstration. After having worked on them for several years, he said these algorithms are advanced enough to support the USV autonomously with little to no human intervention, allowing the parties to achieve one of the MOU's objectives of exploring the capabilities offered by employing a more maneuverable USV as support to the UUV, compared to using a slower USV in the past that couldn't keep up with the UUV.

"We're here to coordinate missions and make sure the commands they (NMOC) send to the kayak are getting through, but once both parties have more experience with this system, it will almost be unnecessary for us to be here," said Gordon, an electrical engineer assigned to Code 8633. "As it is, they're starting the kayak, they're sending and receiving data and everything is working the way we were hoping. And they're doing all that from Mississippi."

According to Gordon, Carderock engineers developed the USV for a project for the Office of Naval Research for the purpose of tracking a submersible with a surface vehicle, as it is doing here. This demonstration added a direct acoustic link between the two vehicles and a satellite connection between the USV and shore station to previous methods, as well as the ability to send simple redirect instructions to the USV during the mission. 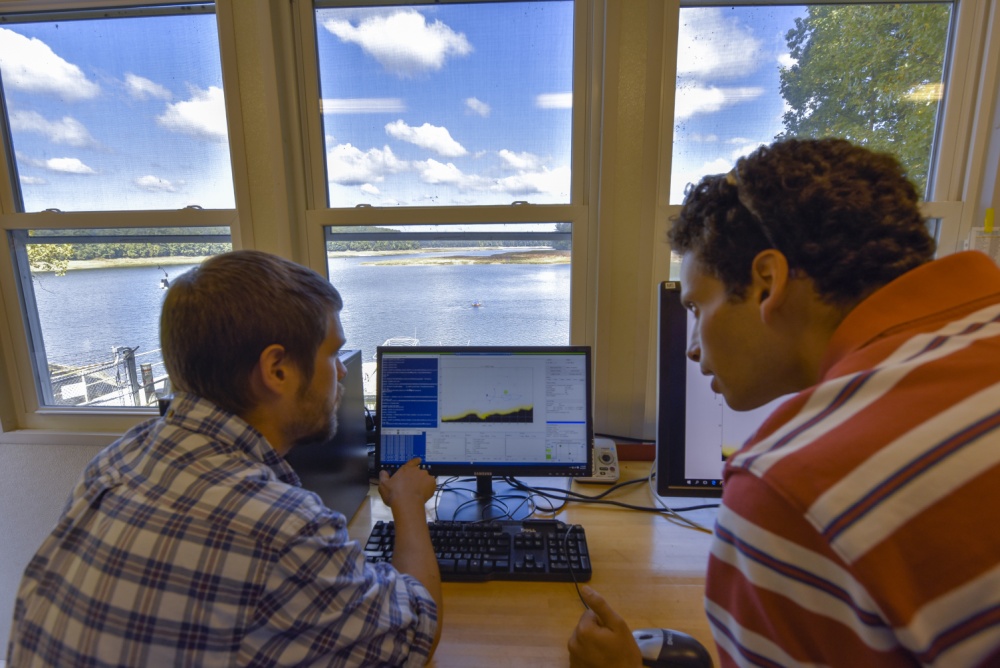 Rice added the collaboration demonstrated a relatively mature UUV/USV system that can be fielded without significant additional investment, achieving another goal of the MOU.

Rice said this was Carderock's first collaboration with NMOC. He believes both parties are happy with the results and looks forward to working with them again. Other Carderock engineers participating in the demonstration included Judah Milgram from Carderock's Sea-based Aviation and Aeromechanics Branch (Code 882) and Woody Pfitsch, Alex Punzi and Kyle Corfman from Code 863.

NAVOCEANO is responsible for providing oceanographic products and services to all elements of the Department of Defense and maximizes sea power by applying relevant oceanographic knowledge in support of U.S. National Security. For more information on NAVOCEANO, click here.

NMOC provides information on the physical environment - including wind, weather, wave height, currents, temperature and precise time - that is required by Navy ships, submarines, aircraft and special forces to operate and navigate safely and effectively. Located at John C. Stennis Space Center, Mississippi, NMOC headquarters directs and oversees 2,500 globally-distributed military and civilian personnel who collect, process and exploit information to assist Fleet and Joint Commanders around the world in all warfare areas to make better decisions faster than the adversary.