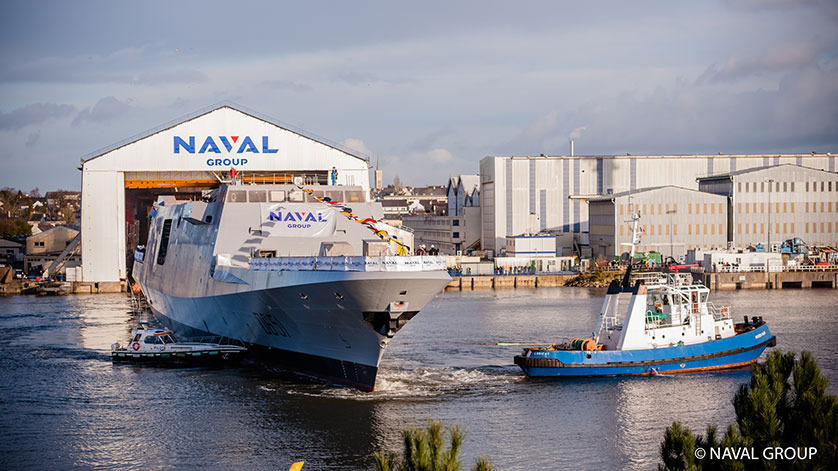 On 1 February 2018, Naval Group floated the FREMM multi-mission frigate Normandie, just 12 months after the start of hull assembly in the building dock on the Lorient site.

The completion of this milestone represents an important step, demonstrating the industrial and technological mastery of Naval Group, ensuring compliance with a very tight schedule to be able to deliver, as foreseen, six of the FREMMs ordered by OCCAR (Organisation for Joint Armament Cooperation) on behalf of the DGA (French Defence Procurement Agency – Direction Générale de l’Armement) to the French Navy before the end of 2019.

The eighth FREMM frigate to be built in Lorient and the sixth in the series ordered by OCCAR on behalf of the DGA for the French Navy, the FREMM Normandie was taken out of its building dock in Lorient where it was assembled on time: just 12.5 months since the first block was positioned on the keel block line.

“This floating out was a real scheduling challenge to fulfil our commitment to deliver 6 anti-submarine FREMMs to the French Navy by 2019, as planned in the Military Programming Law 2014-2019. A challenge that has been successfully overcome thanks to the determination and know-how of the group’s teams, combined with an organisation developed on the basis of the feedback gathered from the previous ships”, recalls Nicolas Gaspard, director of the FREMM program.

It is in autumn that the Normandie will leave the dry dock to undergo its first sea trials before delivery to the French Navy, foreseen in summer 2019.

The timely completion of the floating out milestone strengthens Naval Group’s capacity to maintain the fast pace of series production for this major programme. Six FREMM frigates were already delivered between 2012 and 2017. The Aquitaine in 2012, the Provence in 2015, the Languedoc in 2016 and last but not least the Auvergne in April 2017. On the international market, Morocco took delivery of the Mohammed VI in 2014 and Egypt took delivery of the Tahya Misr in 2015.

The FREMM Bretagne, floated in September 2016, will be transferred to Brest, where it will be based, in the second quarter 2018. The two final frigates, Alsace and Lorraine, will be delivered to the French Navy before the end of 2022. These frigates will be equipped with strengthened air defence capacities. The assembly of the FREMM Alsace in the Lorient building dock will start in spring 2018.

Heavily armed, the FREMM Normandie deploys as its sister ships the most effective weapon systems and equipment, such as the Herakles multifunction radar, the naval cruise missile (MdCN), the Aster and Exocet MM 40 missiles or the MU 90 torpedoes.