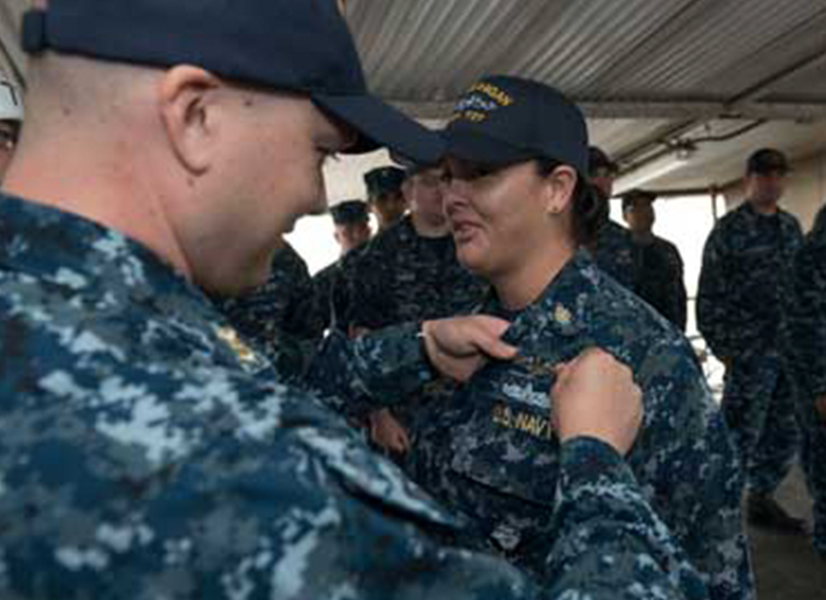 One of the first enlisted women to serve aboard a Navy submarine earned her submarine qualification, or "dolphins," on August 2nd and is preparing to deploy aboard USS Michigan (SSGN 727).

Though assigned to Michigan, Saavedra embarked aboard USS Ohio (SSGN 726), which is currently deployed, to earn her basic, advanced, and underway watch qualifications. "I couldn't be more proud to wear the 'dolphins,'" said Saavedra. "To have earned the respect of my fellow submariners is more rewarding than expected. I am honored to serve as a qualified member in such a prestigious community."

"Chief Saavedra's accomplishment reinforces the fact that there are very capable women who have the talent and desire to succeed in the submarine force," said Capt. Joe Turk, commanding officer of USS Michigan. "Drawing from talented individuals like Chief Saavedra helps us maintain the world's best submarine force."

In June 2012, the first female supply officer earned her submarine qualification and the first three unrestricted line officers earned their gold dolphins the following December. Structural changes to the submarine weren't necessary at the time. Because officers bunk in three-man staterooms, the new female officers' living space was already separated from the common areas of the ship. Since the first selections were made in 2015, female enlisted Sailors have attended the Basic Enlisted Submarine School at Naval Submarine Base New London in Groton, Connecticut. Many of those selected had to cross-rate, which also included retraining in their new rating. Thirty-eight Sailors were selected in the second cycle announced in May 2016 and have entered the training pipeline; they will be assigned to USS Florida (SSGN 728), based out of Kings Bay, Georgia.

"This is a very exciting time for the submarine force and the Navy," said Rear Adm. Randy B. Crites, the Enlisted Women in Submarines Task Force Commander. "We are reaching milestones that allow us to be more capable than ever by growing and diversifying our force as these exceptional women make their way through the training pipeline." The third application window for enlisted women on submarines will be announced in an October 2016 Naval message, or NAVADMIN. The selectees for the third round of selections will serve aboard USS Ohio (SSGN 726), home ported in Bangor, Washington.

For more information about enlisted women in submarines, visit the website.

Better Career Opportunities for Women in

Further Milestones of QuietSea Passive A