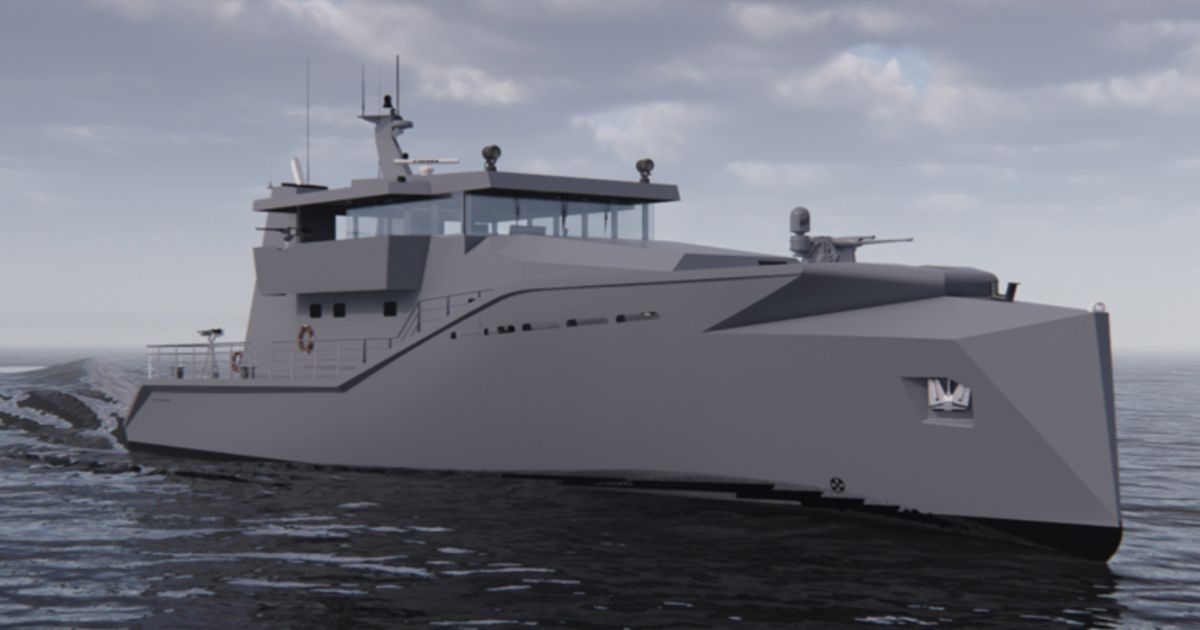 Construction is underway at Metal Shark’s Franklin, Louisiana shipyard on the new 115 Defiant, a robust multi-mission vessel designed in-house by Metal Shark’s engineering team and being acquired by the GDF via direct purchase. Once complete, the new vessel will join the eight other Metal Shark interdiction and patrol vessels currently in service with the GDF.

“Due to increasing maritime security concerns, we continue to see increased demand among military operators for larger patrol vessels capable of extended missions at sea,” said Metal Shark CEO Chris Allard. “Considering the relatively few options available in this size range, we felt that clients in this market segment have been underserved. We are now giving operators an entirely new option with this next-generation platform.”

The imposing 115 Defiant has been designed to project power while offering unmatched performance, with a subtle reverse raked-bow offering reduced resistance for improved seakeeping in higher sea states. A prominent breakwater and elevated wheelhouse with nearly 360-degree visibility assure confident all-weather operation. The vessel will carry a crew of 24 on extended missions at sea and has been designed to accommodate a wide range of mission profiles including search and rescue, border patrol, police and customs duties, counter-narcotics operations, and securing waters of economic importance.

For mothership operations, the 115 Defiant carries a 5.2-meter Metal Shark-built aluminum rigid inflatable boat (RIB) on the aft deck. The RIB carries up to 10 persons and is powered by twin 50-horsepower four-stroke outboard engines. For the GDF, the RIB will be launched and retrieved via a PS11000M-5m Palfinger Stiff Boom Marine Crane. The 115 Defiant is also offered with an integrated stern slipway for underway launch and retrieval.

The 115 Defiant has been configured to meet the performance requirements of the GDF. Powered by twin 1,600 BHP CAT C32 diesel inboard engines turning conventional propellers through Twin Disc marine gears, the vessel is expected to deliver a cruise speed of 12 knots, and a top speed in excess of 20 knots. At cruise, the vessel boasts a 2,000 nautical mile range and ten days’ endurance. A range of propulsion choices are offered to accommodate the performance requirements of other clients.

“The Guyana Defense Force and Metal Shark have been strategic partners for nearly ten years and we are pleased to continue to build on our relationship,” said Metal Shark’s Vice President of International Business Development, Henry Irizarry. “The United States Ambassador and US Embassy staff in Guyana were crucial in advocating for Metal Shark and our American-made products, and our team worked closely with the GDF and the Government of Guyana to design a vessel ideally suited for their operational requirements. Metal Shark looks forward to delivering this modern and capable patrol craft platform, which will be the latest success in our long-term partnership with Guyana.”

“As with the other nearly 1,000 Metal Shark Defiant-class vessels now in military service worldwide, the new 115 Defiant combines modern, crew-friendly features in a durable and functional package designed for performance,” said Mr. Allard. “With this new platform we’re delivering a custom-tailored solution that will serve the Guyana Defense Force for years to come, while at the same time presenting a compelling and capable new offering to all of our military clients.”