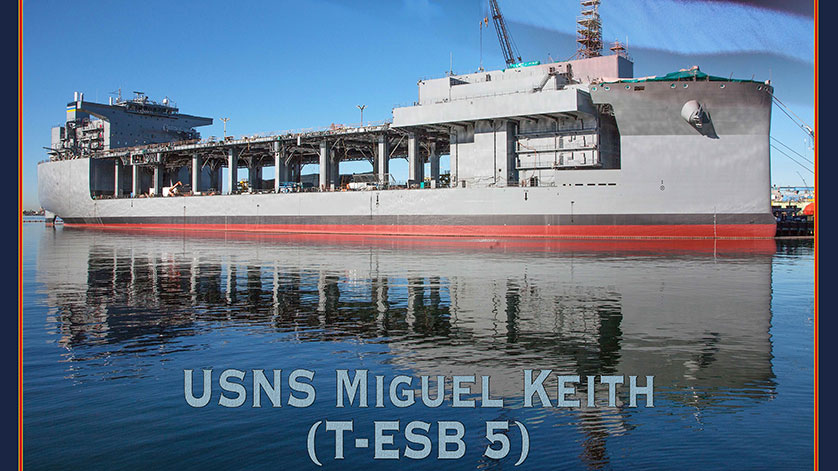 A keel laying is the formal recognition of the start of a ship's construction. It is the joining together of a ship's modular components and the authentication or etching of the ship sponsors initials into a ceremonial plate.

"A keel laying is the first major milestone in the construction of a new ship," said Capt. Scot Searles, Strategic Sealift and Theater Sealift program manager, Program Executive Office (PEO) Ships. "The keel is the symbolic backbone of the ship. Over the next several months ESB 5 will begin to take shape and I look forward to seeing its progress as we continue constructing this versatile ship."

ESBs are highly flexible, modular platforms that are optimized to support a variety of maritime based missions including Special Operations Force and Airborne Mine Counter Measures support operations in addition to humanitarian support and sustainment of traditional military missions. The ESBs include a four spot flight deck and hangar and a versatile mission deck and are designed around four core capabilities: aviation facilities, berthing, equipment staging support, and command and control assets. The ESBs will operate as the component commander requires providing the U.S. Navy fleet with a critical access infrastructure that supports the flexible deployment of forces and supplies.

The Montford Point class is comprised of five ships across two variants in support of the Maritime Prepositioning Force. USNS Montford Point (T-ESD 1) and USNS John Glenn (T-ESD 2) have been delivered and are currently in service. The first of the ESB variant, USS Lewis B. Puller (ESB 3), was delivered to the fleet in 2015 as a USNS ship. In August 2017, the ship was commissioned as an USS ship on station in Bahrain. The USNS Hershel "Woody" Williams (ESB 4) was christened in October and is expected to deliver to Military Sealift Command at the end of February.

As one of the Defense Department's largest acquisition organizations, PEO Ships is responsible for executing the development and procurement of all destroyers, amphibious ships, special mission and support ships and boats and craft.