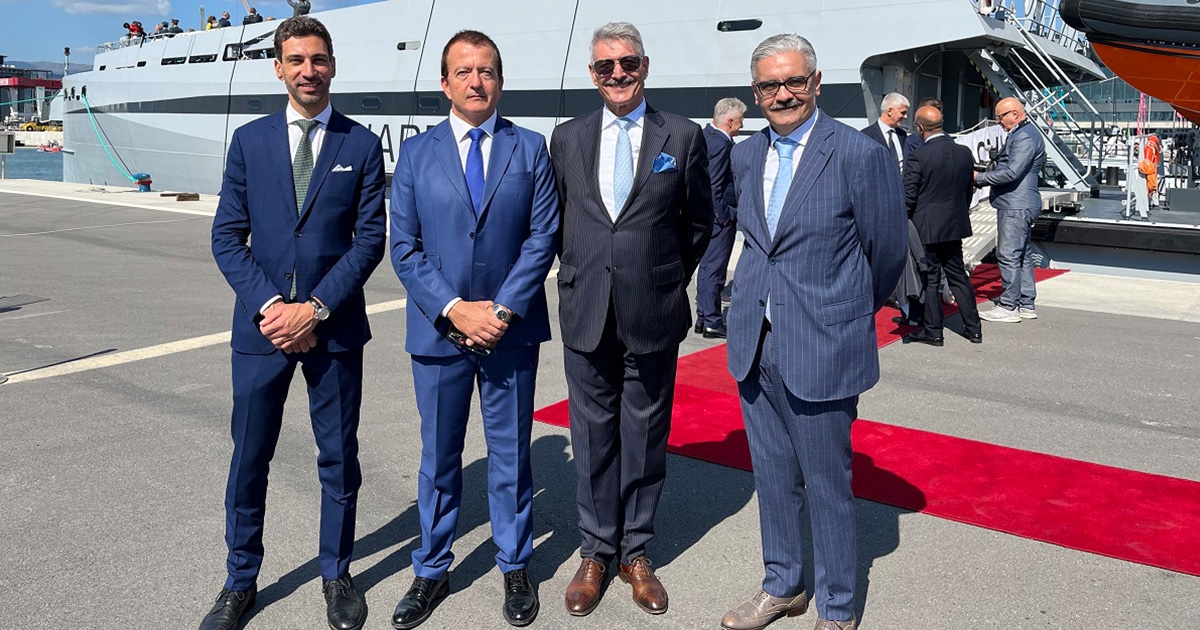 In Genova, on September 22, at a ceremony held in the presence of the Minister of Economy and Finance Daniele Franco and the Commander General of the Guardia di Finanza, Gen. C.A. Giuseppe Zafarana, the P.04 Osum, built to a Damen Stan Patrol 6009 design, officially received the naval flag. The event marked her joining the fleet of Italy’s Guardia di Finanza, a law enforcement agency under the authority of the MEF, as its new flagship.

The 60-meter vessel was built at the Cantiere Navale Vittoria Shipyard (CNV), based in Adria on Italy’s northern Adriatic coast, under Damen’s Technical Cooperation program. Not only the largest vessel to be operated by the Guardia di Finanza, P.04 Osum is also their first sustainable OPV with a hybrid, diesel-electric propulsion system.

She arrived in the port of Genova on 16th September at the end of the first of a series of training and operational missions carried out along Italy’s maritime border and will remain there for the duration of the 62nd Genova International Boat Show.

The P.04 Osum has been designated the first of the new “Bandiera” class, one that is characterized by the application of innovative technological equipment and green propulsion systems. These are priorities on which the Guardia di Finanza intends to focus in the years ahead. The OPV has the most modern navigation, communication and identification systems, allowing her crew of 30 to effectively carry out maritime policing and the monitoring of national and European maritime borders in all weather and sea conditions. 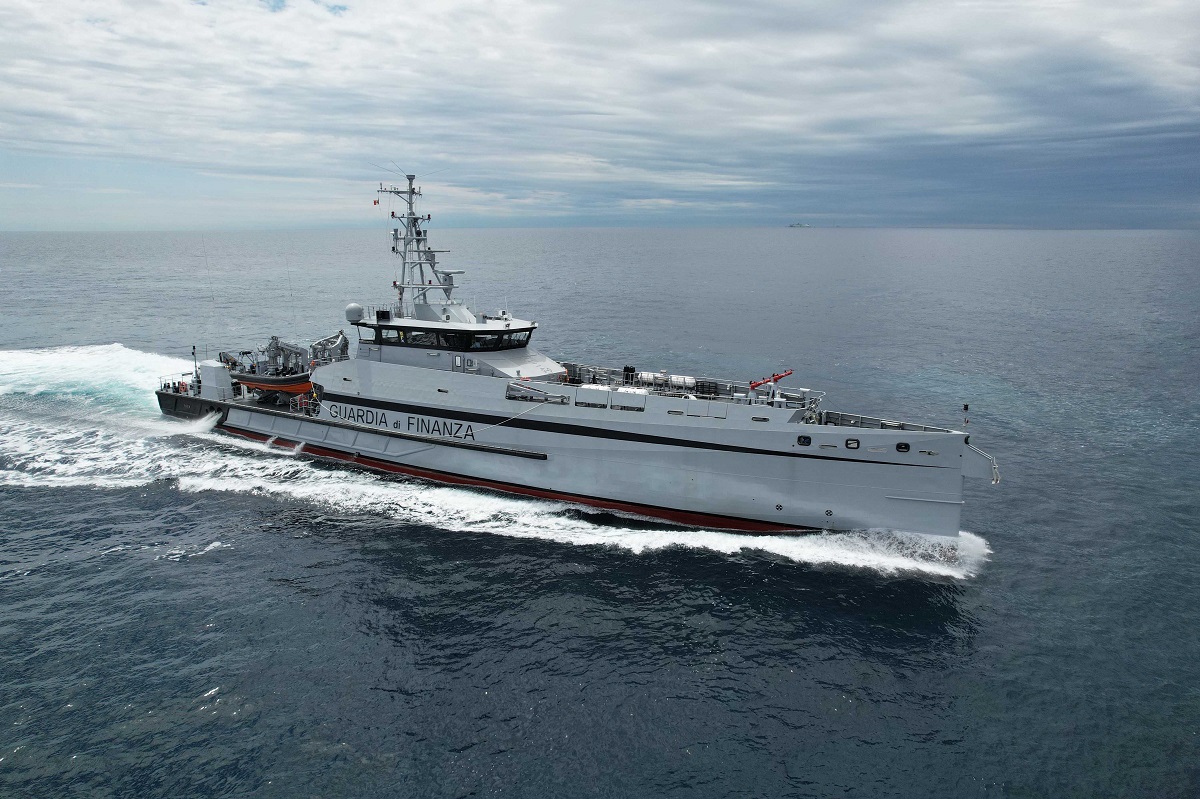 The introduction of hybrid diesel-electric propulsion, in addition to safeguarding the environment, ensures continuous operational autonomy for up to 15 days and 2,000 nautical miles at a cruising speed of 18 knots. A maximum speed of 26 knots in a wide range of conditions is possible due to the vessel’s trademark Damen Axe-bow that allows the hull to cut through the waves with minimal resistance. At lower speeds, the diesel-electric system enables low-emission operations at speeds of up to nine knots. This is achieved by twin 270kW reversible (PTI) electric motors linked to the drive shafts.

Other notable capabilities include the deployment and retrieval of UAVs from the aft deck and two, nine-meter RHIBs that can also be rapidly deployed for interception, rescue and the boarding of suspect vessels.

In addition to its domestic duties the P.04 Osum, co-financed with European Community resources under the Internal Security Fund 2014-2020, will also enhance the operational capacity of the Guardia di Finanza in EU waters and the so-called enlarged Mediterranean. In particular, the prevention of illegal activities that threaten the security of maritime borders in the context of the international cooperation activities will be conducted under the flag of the European Frontex Agency, and the vessel is equipped with facilities for hosting European officials during joint international operations promoted by the agency. 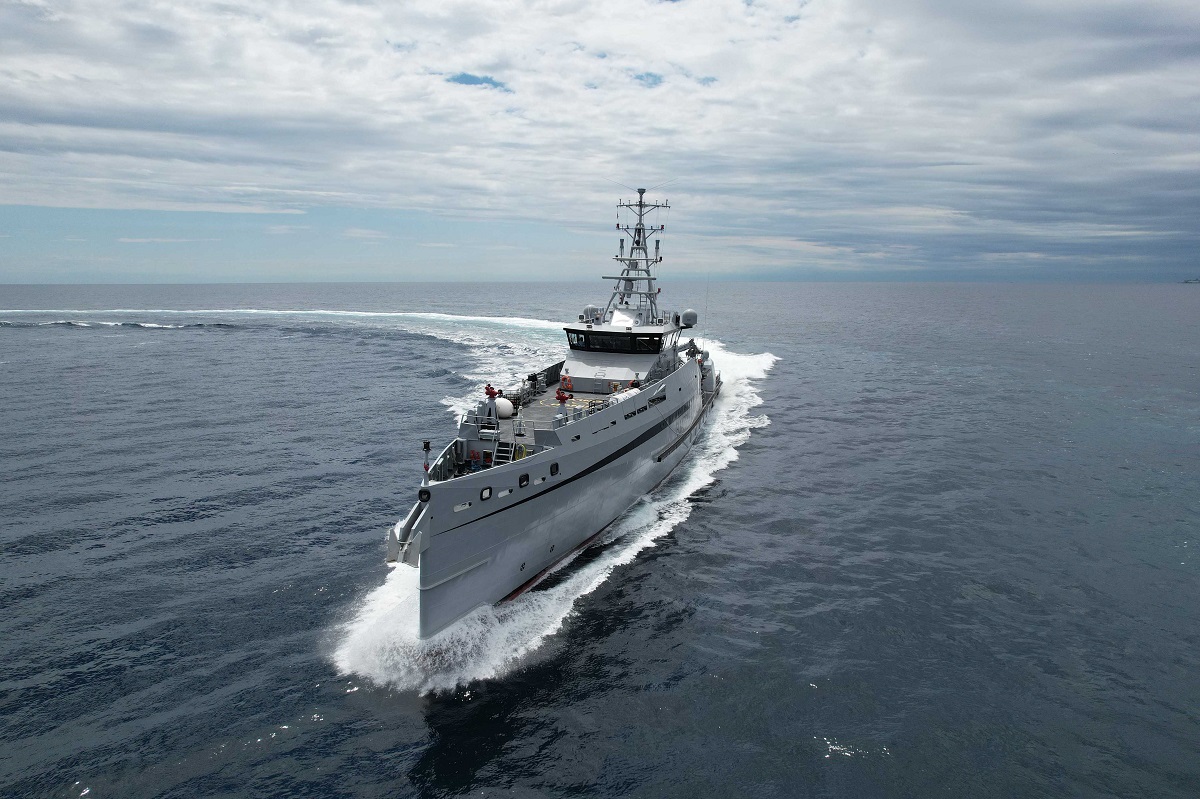 At the handover ceremony, CNV board member Luigi Duò said: "We are proud to be equipping the Guardia di Finanza fleet with its first diesel-electric offshore patrol vessel. P.04 Osum represents a convergence of innovation and technology that will ensure a significant reduction in fuel consumption and emissions, and maximum flexibility of operational use."

Damen and CNV have previous experience of working together for the Guardia di Finanza, with two Stan Patrol 5509 vessels built and delivered in 2014.

Antonio Marte, from Damen Shipyards, added: “It has been a pleasure to work once again with CNV, this time to provide the Guardia di Finanza with their flagship and most innovative vessel. The project began just as the second wave of COVID-19 swept across Europe, but every effort was made to ensure that P.04 Osum was delivered on time and to the full satisfaction of the Guardia di Finanza. We are pleased that our local build program has enabled us to deliver a such a sophisticated vessel alongside a trusted and valued partner.”