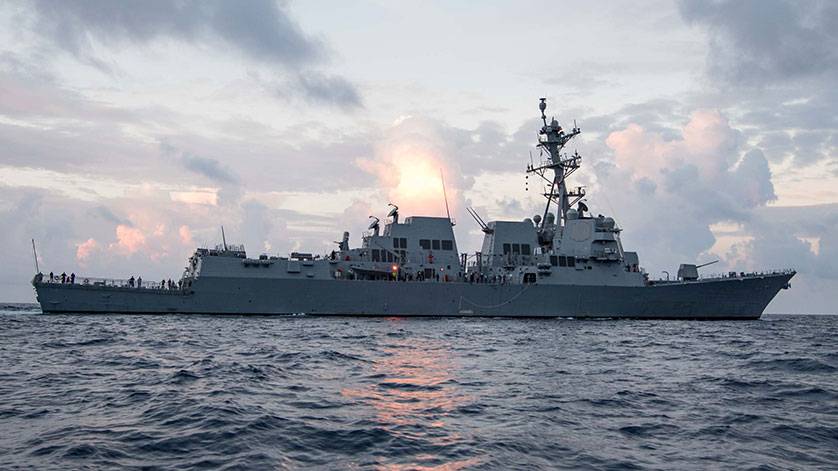 “It’s always a great accomplishment when our shipbuilders successfully take a ship to sea for the first time,” Ingalls Shipbuilding President Brian Cuccias said. “DDG 114’s sea trials showcase the skill of our shipbuilders and our large, national DDG 51 supplier base. We look forward to acceptance trials, and to delivering our 30th Aegis destroyer to our U.S. Navy customer later this year.”

“Our test and trials personnel, craftsmen and Supervisor of Shipbuilding team continue to show their dedication to delivering quality ships to the Navy every time they go to sea on these trials,” said George S. Jones, Ingalls’ vice president of operations. The shipbuilders at Ingalls take pride in their work and in the missions that these ships will be doing for our country.”

DDG 114 is named to honor Pfc. Ralph Henry Johnson, who was awarded the Medal of Honor for his heroic actions that saved others during the Vietnam War. Johnson shouted a warning to his fellow Marines and hurled himself on an explosive device, saving the life of one Marine and preventing the enemy from penetrating his sector of the patrol’s perimeter. Johnson died instantly. The Charleston, S.C., native had only been in Vietnam for two months and a few days when he was killed at the age of 19.

“There is still work to be done,” said George Nungesser, Ingalls’ DDG 51 program manager. “Completing another successful sea trial puts us one step closer to delivering the Navy another state-of-the art guided missile destroyer to help in our nation’s defense. Now it’s time for our team to get back to work so they can have DDG 114 ready for acceptance trials and then ready for the fleet.”

Arleigh Burke-class destroyers are highly capable, multi-mission ships and can conduct a variety of operations, from peacetime presence and crisis management to sea control and power projection, all in support of the United States’ military strategy. The guided missile destroyers are capable of simultaneously fighting air, surface and subsurface battles. The ship contains myriad offensive and defensive weapons designed to support maritime defense needs well into the 21st century.