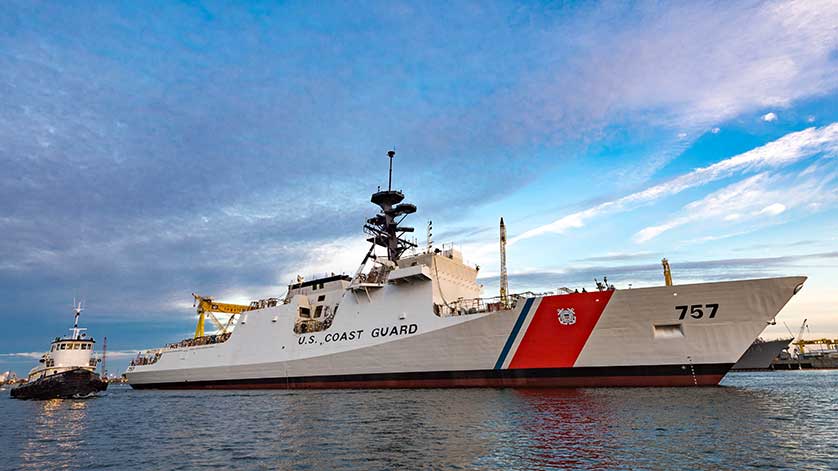 Huntington Ingalls Industries’ Ingalls Shipbuilding division launched the National Security Cutter (NSC) Midgett (WMSL 757) on Wednesday. Midgett is the eighth NSC Ingalls has built for the U.S. Coast Guard. It will be christened during a ceremony on Dec. 9.

“As the National Security Cutter program continues to mature, we are providing our Coast Guard customer the best ships in their fleet,” said Ingalls Shipbuilding President Brian Cuccias. “Our shipbuilders know and understand the importance of quality in building these highly capable cutters so the men and women of the Coast Guard can perform their important national security missions.”

Midgett was translated via Ingalls’ rail car system to the floating dry dock last week, and the dock was moved away from the pier on Tuesday night. With the assistance of tugboats, Midgett launched off the dock early Wednesday morning.

“We’ve become very good at building these ships and continue to improve with the incorporation of lessons learned from previous cutters,” said Derek Murphy, Ingalls’ NSC program manager. “Launch is a much-anticipated and exciting event, but it’s still just one step in bringing this cutter to life. Our shipbuilders are ready to get back to work to ensure Midgett is the best NSC to date.”

The ship is named to honor John Allen Midgett, who was awarded the Silver Cup by the U.K. Board of Trade in 1918 for the renowned rescue of 42 British sailors aboard the British tanker Mirlo after it was torpedoed by a German U-boat off the coast of North Carolina. He was also awarded the Gold Lifesaving Medal by the U.S. Coast Guard in 1924. Midgett was a senior enlisted member of the U.S. Lifesaving Service when it merged with the U.S. Lighthouse Service and U.S. Revenue Cutter Service to become today’s U.S. Coast Guard.

Legend-class NSCs are the flagships of the Coast Guard’s cutter fleet. Designed to replace the 378-foot Hamilton-class high-endurance cutters that entered service in the 1960s, they are 418 feet long with a 54-foot beam and displace 4,500 tons with a full load. They have a top speed of 28 knots, a range of 12,000 miles, an endurance of 60 days and a crew of 110.

NSCs are capable of meeting all maritime security mission needs required of the high-endurance cutter. They include an aft launch and recovery area for two rigid hull inflatable boats and a flight deck to accommodate a range of manned and unmanned rotary wing aircraft. The Legend class is the largest and most technologically advanced class of cutter in the Coast Guard, with robust capabilities for maritime homeland security, law enforcement, marine safety, environmental protection and national defense missions. NSCs play an important role enhancing the Coast Guard’s operational readiness, capacity and effectiveness at a time when the demand for their services has never been greater.

Ardyne Launches With Acquisition of Well