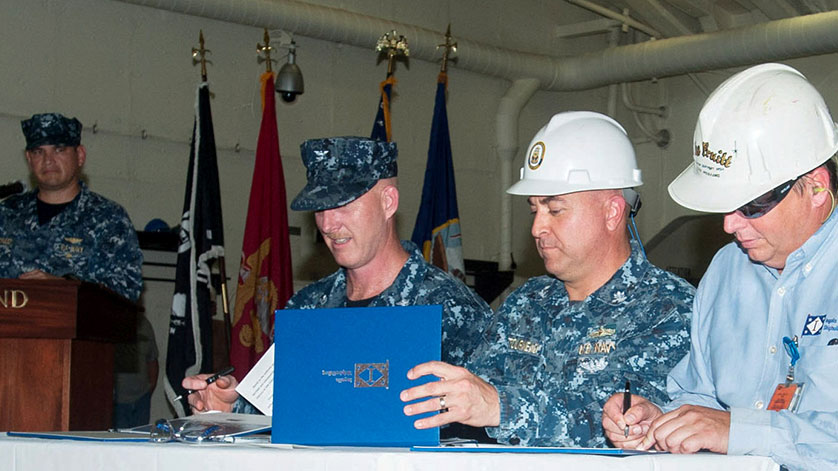 “Today is a great day for this collective industry and customer team,” said Kari Wilkinson, Ingalls’ vice president, program management. “For many of the shipbuilders, Supervisor of Shipbuilding representatives and members of the Navy program office, this is the 11th ship they have built and delivered together. Their personal commitment to excellence has become the hallmark of the LPD program, and we are positioned to continue that tradition on future ships.”

Portland was delivered during an afternoon ceremony with shipbuilders, ship’s force and representatives of Supervisor of Shipbuilding Gulf Coast together in attendance. The signing of the DD 250 document officially transfers custody of the ship from HII to the Navy.

“I am amazed with the shipbuilders here at Ingalls,” said Capt. J.R. Hill, Portland’s prospective commanding officer. “There are thousands of them who have been working to build this ship and put it into service, and they’ve really done a great job. I’m very impressed with the team Ingalls has put together as well as the 370 crew members present today who are ecstatic about taking control of this ship. We look forward to what she can do in the future. ”

Portland is named for the largest city in the state of Oregon. The state has a long history with the Navy, going back to the construction of hundreds of World War II Liberty and Victory ships at three Portland-area shipyards.

Ingalls has delivered 11 San Antonio-class ships to the Navy and currently has one more, Fort Lauderdale (LPD 28), under construction. In June, Ingalls received an advance procurement contract from the Navy to provide long-lead-time material and advance construction activities for LPD 29, the 13th ship of the San Antonio class.

The San Antonio class is the latest addition to the Navy’s 21st century amphibious assault force. The 684-foot-long, 105-foot-wide ships are used to embark and land Marines, their equipment and supplies ashore via air cushion or conventional landing craft and amphibious assault vehicles, augmented by helicopters or vertical takeoff and landing aircraft such as the MV-22 Osprey. The ships support a Marine Air Ground Task Force across the spectrum of operations, conducting amphibious and expeditionary missions of sea control and power projection to humanitarian assistance and disaster relief missions throughout the first half of the 21st century.