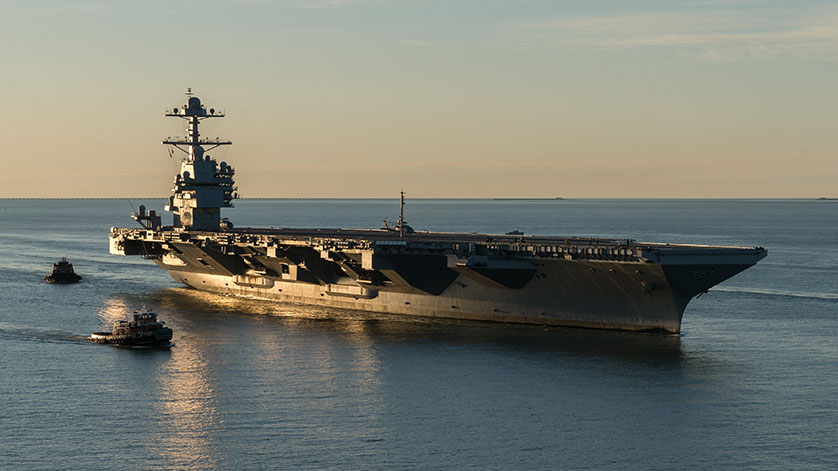 Builder’s sea trials test the ship’s systems, components and compartments at sea for the first time. The trials also include high-speed runs and demonstrate many of the carrier’s other capabilities.

“In my 36 years with Newport News Shipbuilding, I’ve ridden many sea trials,” said Newport News Shipbuilding President Matt Mulherin. “While they have all been great experiences, this one was especially rewarding. I’ve been with this ship since 2001, when she was still just a design concept. To see her come to life and perform as she was designed and built to do is awe-inspiring and a testament to her shipbuilders and Navy crew.”

“Everybody has to work together to really exercise the ship and take it through its final paces,” said Rolf Bartschi, Newport News Shipbuilding’s vice president, Gerald R. Ford (CVN 78) carrier construction. “We work to test the systems and actually operate the ship out here at sea. It’s fantastic to be out and really see this ship come to life.”

Susan Ford Bales, ship’s sponsor and President Gerald R. Ford’s daughter, was unable to participate in sea trials but shared in the excitement. “Completion of builder’s sea trials for Dad’s namesake aircraft carrier is the magnificent culmination of years of hard work,” she said. “I’m ecstatic and could not be prouder of the ship’s successful performance. CVN 78 is the mightiest ship ever built, and you can draw a straight line—a very straight line—as to why that is so: The ship is built by the greatest shipbuilders in the world, my fellow Newport News shipbuilders. I’m thrilled to add my congratulations and heartfelt thanks—as Dad most certainly would—to the entire Newport News Shipbuilding team, and to the remarkable crew of the Ford, for their patriotic commitment to excellence and for a job well done—very well done. As the ship’s sponsor, I look forward with great excitement to commissioning the USS Gerald R. Ford into the fleet very soon.”

Prior to delivery, the ship will undergo acceptance trials, conducted by U.S. Navy Board of Inspection and Survey representatives, to do a final test and evaluation of the ship’s systems and performance.

Gerald R. Ford is the first in a class of next-generation aircraft carriers designed to replace Nimitz-class aircraft carriers. The Ford class features a new nuclear power plant, a redesigned island, electromagnetic catapults, improved weapons movement, an enhanced flight deck capable of increased aircraft sortie rates, and growth margin for future technologies. Each Ford-class ship will operate with a smaller crew than a Nimitz-class carrier and provide a $4 billion total ownership cost savings for the Navy.