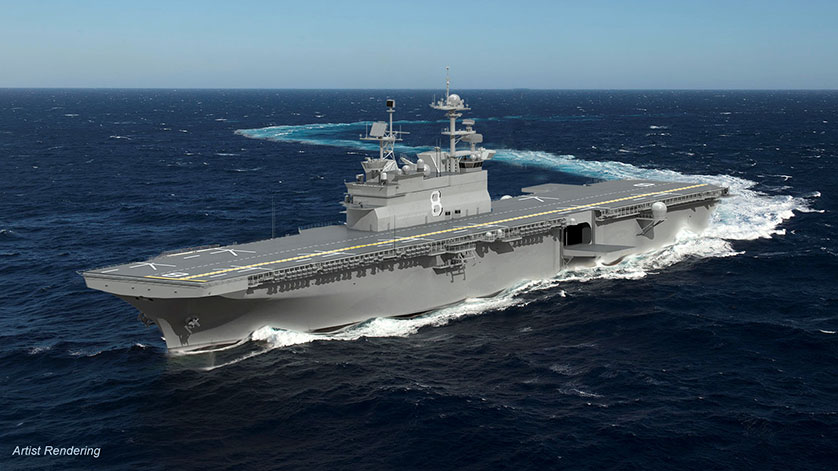 Huntington Ingalls Industries’ Ingalls Shipbuilding division has been awarded a $3 billion contract for the detail design and construction of the amphibious assault ship Bougainville (LHA 8). Ingalls was awarded the original long-lead material contract for the third ship in the America (LHA 6) class on June 30, 2016.

“Our shipbuilders do an outstanding job building large-deck amphibious warships,” Ingalls Shipbuilding President Brian Cuccias said. “We look forward to incorporating 50 years of amphibious shipbuilding knowledge into the Navy’s newest assault ship and providing the sailors and Marines a complex and highly capable product to perform their missions of freedom.”

Construction is scheduled to begin in the fourth quarter of 2018, and delivery is expected in 2024. Tripoli (LHA 7), the second of the America-class amphibious assault ships, is currently under construction at Ingalls and was launched on May 1. The ship will be christened on Sept. 16.

Bougainville will retain the aviation capability of the America-class design while adding the surface assault capability of a well deck. The well deck will give the U.S. Marine Corps the ability to house and launch two landing craft air cushion (LCAC) hovercraft or one landing craft utility (LCU) as needed during their maritime missions. Other additions to Bougainville include a larger flight deck configured for Joint Strike Fighter and Osprey V-22 aircraft, which can be used for surface and aviation assaults. The additional area on the flight deck comes in part from a smaller deck house and an additional sponson.

LHA 8 will be the second Navy vessel to bear the name Bougainville. The name commemorates the Bougainville Campaign that took place during World War II. During the campaign, which lasted from 1943 to 1944, Allied forces secured a strategic airfield from Japan in the northern Solomon Islands, helping the allies break the Japanese stronghold in the South Pacific.

Ingalls is currently the sole builder of large-deck amphibious ships for the Navy. The shipyard delivered its first amphibious assault ship, the Iwo Jima-class USS Tripoli (LPH 10), in 1966. Ingalls has since built five Tarawa-class (LHA 1) ships, eight Wasp-class (LHD 1) ships and the first in a new class of ships, America (LHA 6).