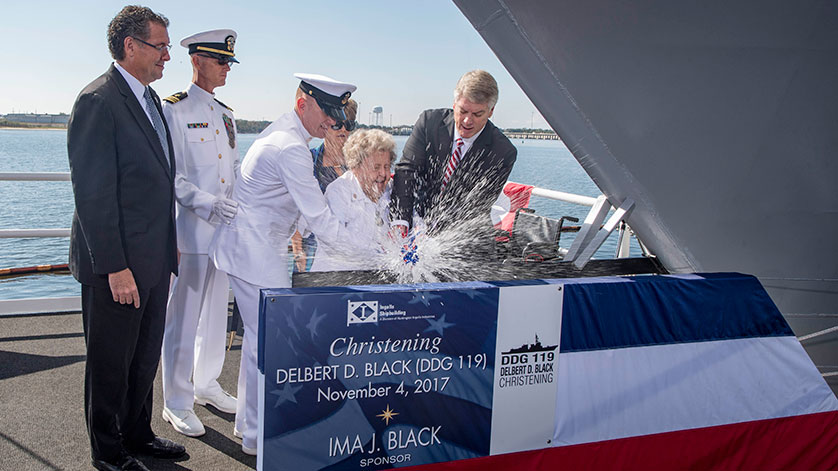 “This ship is a fitting tribute to the master chief who set the tone for all of us to follow as authentic, competent and courageous leaders,” said Master Chief Petty Officer of the Navy Steven Giordano, who served as keynote speaker. “This ship represents the enlisted force perhaps more than any other ship in the Navy.”

The ship is named in honor of Delbert D. Black, who served as a gunner’s mate in the U.S. Navy and was aboard the battleship USS Maryland (BB 46) during the attack on Pearl Harbor.

“Delbert D. Black is the first ship built to honor the man appointed in 1967 as the first Master Chief Petty Officer of the Navy,” said Ingalls Shipbuilding President Brian Cuccias. “Black enlisted in the Navy in March of 1941, and over the years, he served in three wars and on nearly a dozen ships, spending 21 of his 30 in the Navy at sea. Ingalls’ ships are built for men and women like Master Chief Black with one goal in mind: to protect the brave Americans who protect our freedom.”

Ima J. Black, Delbert’s widow and a World War II veteran of Navy WAVES (Women Accepted for Voluntary Emergency Service), is the ship’s sponsor. She and Delbert were married for 50 years until he died in 2000. She officially christened the ship by successfully breaking a bottle of sparkling wine across its bow.

“This is a ceremony that we’ve all been looking forward to for a long time,” Black said. “My message to the shipbuilders has always been, ‘Hurry up! I’m running out of time.’ Well, look at me. I made it! I made it! I made it! Today I’m thinking of my husband. I’m wishing that he was standing here instead of me. However, I know that his spirit is anchored in the hull of this ship. Now let us christen this ship and get her ready to join the fleet, where she belongs.”

“Defending our country has not gotten any easier,” said Rep. Gregg Harper, R-Miss. “We are confronted in many ways, but we are comforted as we visit this exceptional shipyard. Brian Cuccias and his team are building 10 or 11 ships right now representing four classes, and even with all that, it’s not at full capacity. Ingalls shipyard is well positioned to provide additional ship production to support a U.S. Navy force structure of 355 ships.”

Arleigh Burke-class destroyers are highly capable, multi-mission ships that can conduct a variety of operations, from peacetime presence and crisis management to sea control and power projection, all in support of the United States’ military strategy. DDGs are capable of simultaneously fighting air, surface and subsurface battles. The ship contains myriad offensive and defensive weapons designed to support maritime defense needs well into the 21st century.

Discovery of Stern from World War II US

Navy to Commission Its Newest Destroyer,

SECNAV Names Destroyer in Honor of US Na