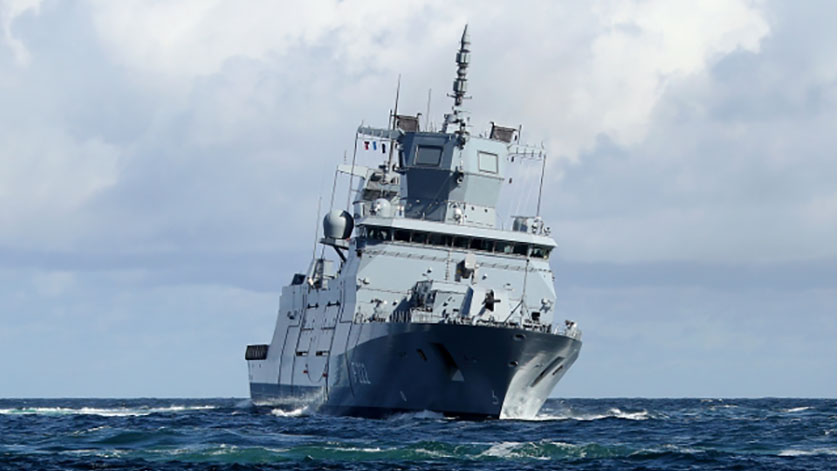 The fourth and final 125 class frigate (F125) for the German Navy was christened Rheinland-Pfalz at the Hamburg site of thyssenkrupp Marine Systems. Following the christening of the first three frigates Baden-Württemberg, Nordrhein-Westfalen and Sachsen-Anhalt this is a further important step toward completing the F125 shipbuilding program.

Malu Dreyer, premier of the state of Rhineland-Palatinate after which the frigate has been named, performed the christening ceremony in the presence of high-level representatives from government, the German Navy and the companies involved. The frigate Rheinland-Pfalz is scheduled to be handed over to the German defense procurement agency BAAINBw in spring 2020. The contract for the F125 program is worth around two billion € in total.

State premier Malu Dreyer, who christened the ship, said, “The German Navy has a long tradition of ships named after the state of Rhineland-Palatinate. I would like to combine the christening of the new frigate Rheinland-Pfalz with my hopes and wishes that the main challenges facing ‘our’ ship will be peace missions and humanitarian operations.”

Dr. Rolf Wirtz, CEO of thyssenkrupp Marine Systems, said, “With state-of-the-art technology and a multiple-crew strategy, the F125 sets new standards in naval shipbuilding. It is designed to meet the requirements of our Navy in current and future missions, such as fighting piracy or monitoring movements of refugees in the Mediterranean. Following today’s christening ceremony, the 125 class frigate family is now complete.”

The ARGE F125 consortium which was awarded the contract to build four F125 class ships for the German Navy in 2007 comprises thyssenkrupp Marine Systems as the lead company and Fr. Lürssen Werft in Bremen. The pre-fitted bow sections are being manufactured at the Fr. Lürssen Werft shipyards in Bremen and Wolgast. Construction of the stern sections, the joining of the two sections and further fitting out is being carried out at Blohm+Voss Shipyards in Hamburg.

The four 125 class frigates will begin the replacement of the German Navy’s eight (Bremen type) 122 class frigates. The ships were developed specially for current and future deployment scenarios for the German Navy. In addition to the traditional tasks of national and alliance defense, the 125 class frigates are designed for conflict prevention, crisis management and intervention/stabilization operations in the international arena. The ships are capable of remaining at sea for 24 months and thus represent the first realization of the intensive use concept, i.e., significantly increased availability in the deployment region.

This capability is supported by a smaller crew and a multiple-crew strategy which permits a complete change of crew during deployment.

Navy Establishes the Readiness Reform an