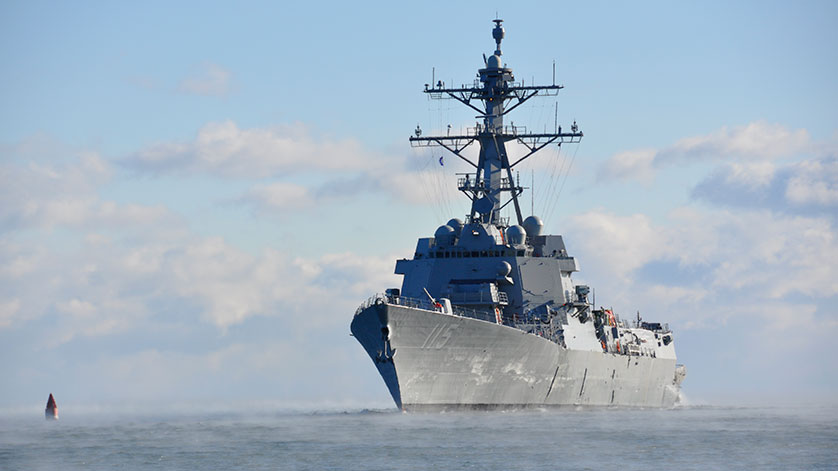 Rafael Peralta is the first Arleigh Burke-class destroyer constructed at the General Dynamics-Bath Iron Works shipyard since the program was restarted in 2010. DDG 115 is the second restart ship to deliver to the Navy, following delivery of future USS John Finn (DDG 113) from Huntington Ingalls Industries in December 2016.

The Navy accepted delivery of Rafael Peralta following a series of at-sea and pierside trials which demonstrated the ship's operational readiness.

"Arleigh Burke-class destroyers continue to provide the most critical warfighting technologies to our Sailors, equipping them with the capabilities they require to meet our missions at sea," said Capt. Casey Moton, DDG 51 class program manager, Program Executive Office (PEO) Ships. "As the 65th Arleigh Burke-class destroyer to join the fleet, Rafael Peralta will continue the proud legacy of this class."

Rafael Peralta is equipped with the Aegis Baseline 9 Combat System, which includes an integrated air and missile defense (IAMD) capability incorporating Ballistic Missile Defense 5.0 Capability Upgrade and Naval Integrated Fire Control-Counter Air. The ship's IAMD radar will provide increased computing power and radar upgrades which improve detection and reaction capabilities against modern air warfare threats. The Aegis Combat System will enable the ship to link radars with other ships and aircraft to provide a composite picture of the battle space and effectively increase the theater space.

The destroyer honors Sgt. Rafael Peralta, one of the most heralded Marines from 2004's Battle of Fallujah. In November 2010, Peralta pulled a grenade tossed by insurgents towards himself and absorbed most of the blast with his body, thus saving the lives of two fellow marines. He was mortally wounded from the grenade blast. Future USS Rafael Peralta will officially join the fleet during a commissioning ceremony in San Diego later this year.