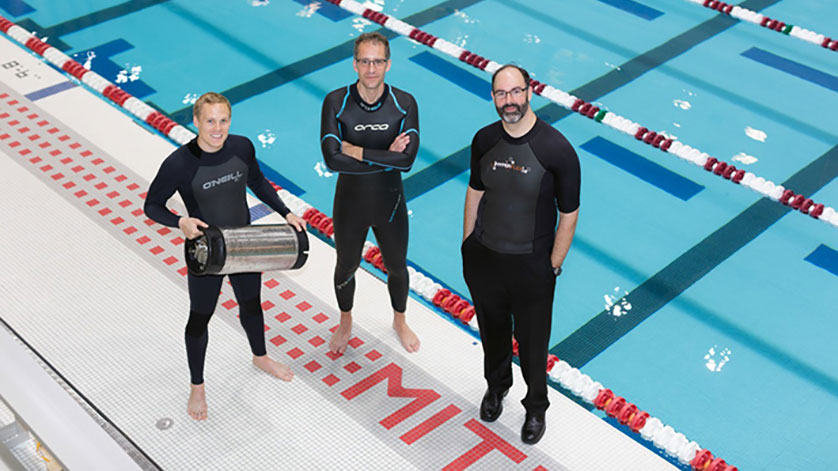 Diving in icy water is extremely dangerous to humans. Within seconds, arteries tighten, blood pressure and heart rate race, and lungs gasp for air. After only minutes, hyperventilation strikes and arms and legs go numb—signaling the onset of hypothermia.

To protect U.S. Navy divers operating in freezing conditions, the Office of Naval Research (ONR) is sponsoring work to design a wetsuit mirroring the insulating properties of animal blubber—allowing divers to swim in frozen waters for longer periods of time.

The work is being conducted by researchers at the Massachusetts Institute of Technology (MIT) and George Mason University. They’ve developed a wetsuit infused with an artificial blubber layer that can triple the endurance time of divers in frozen lakes, rivers or oceans. “This kind of research is especially important as more Arctic sea lanes open up and the Navy increases its readiness to operate in that part of the world,” said Maria Medeiros, a program officer in ONR’s Sea Warfare and Weapons Department. “Whether it’s special operations; search and rescue; or ship repair, maintenance and salvage, finding ways to increase divers’ time and effectiveness in the ice is a priority.”

The project is being led by two MIT professors—Dr. Michael Strano and Dr. Jacopo Buongiorno—and focuses on neoprene wetsuits. Neoprene is the most common material used to make wetsuits, and is a synthetic rubber resembling a thick foam with numerous air pockets. These pockets slow the transfer of heat from the body into the surrounding cold water. Strano and Buongiorno found that by substituting air with various heavy inert gasses—which are non-toxic, don’t have negative chemical reactions, and don’t burn or explode—they created a more efficient, artificial blubber layer within the wetsuit. This increased suit effectiveness in 10-degree-Celsius water from under an hour to multiple hours.

To do so, Strano and Buongiorno placed a neoprene wetsuit in a sealed, specially designed tank the size of a beer keg—and pumped the container with heavy inert gasses for several hours.

Laboratory tests showed the newly pressurized wetsuit kept its insulating properties for over 20 hours after treatment, far longer than divers usually spend in frigid waters. The treatment also could be done in advance of a dive, with the wetsuit placed in a bag to be opened just before use. In such cases, the 20-hour countdown didn’t start until the suit was removed from the bag. “The great thing about this research is that you don’t have to recreate neoprene from scratch,” said Strano. “You can take a wetsuit from a closet, pump the gas into it and transform it into a super fabric.”

The inspiration behind Strano and Buongiorno’s research stems from a conversation they had with Navy SEALs two years ago, when they participated in a Department of Defense science study. The warfighters told the MIT professors about the perils of diving in icy waters and how they urgently needed longer-lasting wetsuit protection.

While their laboratory tests and simulations have been successful, Strano and Buongiorno hope to test the wetsuit further during in-water demonstrations involving Navy and civilian divers. The wetsuit research falls under ONR’s Naval Enterprise Partnership Teaming with Universities for National Excellence (NEPTUNE) program, which helps the Navy and Marine Corps discover ways to improve energy conservation, generate renewable energy and implement energy-efficient technologies—while giving active-duty military, military students and veterans the chance to immerse themselves in university-level research.