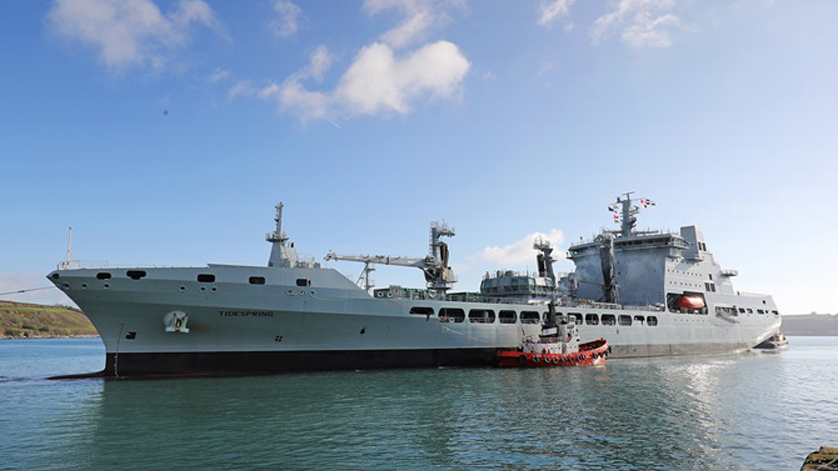 The first of the Royal Navy's new support ships, RFA Tidespring, has arrived in the UK ready for the next stage of work which will bring her into service

The 39,000-tonne tanker will join the Royal Fleet Auxiliary, the civilian-manned fleet which provides support for warships, helping the Royal Navy maintain operations around the world.

She will undergo an intense program of work at the A&P shipyard, and is expected to enter service before the end of the year.

RFA Tidespring's UK arrival is a key milestone in 2017, the year of the Royal Navy, which will also see the MOD develop world-class ships and submarines in support of Britain's role as a leading naval power.

The arrival is a significant milestone in the 'Year of the Navy' which will also see the debut in Portsmouth of the first of the Queen Elizabeth Class aircraft carriers, the start of construction for the fleet of new Type 26 frigates and the opening of the first permanent Royal Navy base east of Suez in more than half a century.

Harriet Baldwin, Minister for Defence Procurement, said, "RFA Tidespring's UK arrival is a key milestone in 2017, the year of the Royal Navy, which will also see the MOD develop world-class ships and submarines in support of Britain's role as a leading naval power. Backed by a rising Defence budget, the delivery of the Tide Class tankers is a crucial element of the Government's £178 billion plan to ensure our armed forces have the equipment they need."

The customization work is helping to support around 300 jobs at A&P Falmouth. The UK work in the wider Tide Class program is worth around £150 million, sustaining further jobs at 27 UK-based companies.

Systems to be installed in Falmouth include the communications equipment, self-defense weapons and armor needed to allow the ship to operate in the most challenging environments.

Vice Admiral Simon Lister, who led procurement of the Tide Class at Defence Equipment and Support, said. "RFA Tidespring will be a familiar and reassuring presence for Royal Navy ships as they undertake missions in defense of the UK's interest. The continued successful delivery of the Tide Class program, meeting all requirements and under budget stands as a testament to the excellent working relationships which DE&S has built with suppliers in the UK and around the world."

The Tide Class has a flight deck able to accommodate the large Chinook helicopter and offer significant improvements over previous RFA tankers such as double hulls and greater environmental protection measures.