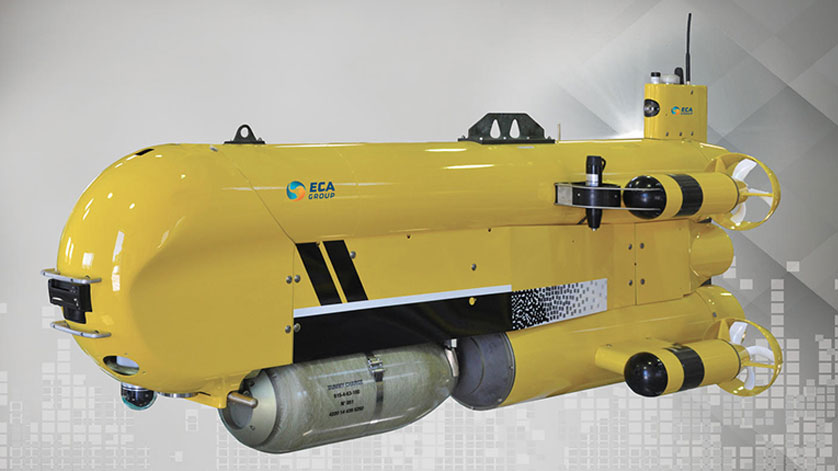 ECA Group announces that a new 5 years contract was awarded by French Ministry of Armed Forces for supplying consumables for French navy PAP demining ROVs (Remotely Operated Vehicles). The amount of this contract will be over 4M€ up to a maximum of 8 M€ depending on utilization frequency. In 1977, ECA Group delivered the very first mine disposal vehicles PAP to the French Navy. In 2017, forty years later, they are still in service with support from ECA Group.

The logistic support and supplying of spares and consumables is an important part of the activity in naval robotics. Sea environment is extremely demanding for equipment and systems and the level of maintenance is very important all along their life especially for subsea drones. Beyond the French Navy, ECA Group proposes a day to day support of its various equipment and systems which are deployed in more than fifteen navies around the world. As an average, logistic support represents 25 to 30 % of naval robotics activity.

The French demining PAPs will remain in activity till the mid 2020’s.They will be progressively replaced with the delivery of the future demining systems that the French Navy will order in the coming years after the results of MMCM FR/UK evaluation program.

ECA Group, which is one of the major players within MMCM FR/UK program, is highly involved in R&D for the future maritime systems of drones (see press release). In June 2017, ECA Group had a very successful demonstration of its Unmanned Mine Counter Measure Integrated System (UMIS) to the Belgium and Netherland Navies which plan to replace their conventional minehunters with systems of drones a few years before French Navy.

Involving simultaneously AUVs (Autonomous Underwater Vehicles, such as A9-M and A18-M), USVs (Unmanned Surface Vehicle, such as INSPECTOR Mk2) and demining ROVs (such as SEASCAN and K-STER C), ECA Group demonstrated its advanced capabilities for Unmanned Maritime Vehicles (UMV) real time cooperation and proved that, thanks to advanced processing embarked in the vehicles, its drones system is the most integrated and advanced on the market.

The UMIS is a very flexible system ECA Group proposes in various configurations. It can be deployed on dedicated Mine Counter Measure Vessels (MCMV), as well as containerized to be embarked on ship of opportunity or directly from the shore in its road transportable configuration for harbor and coastal protection.