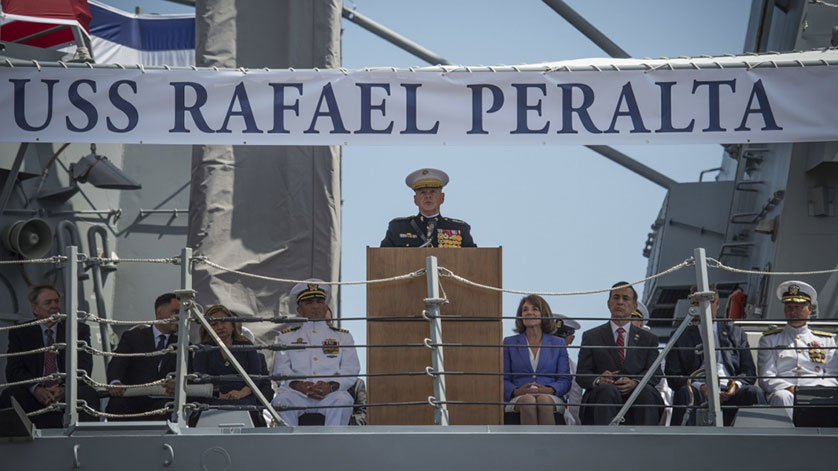 The ship is named in honor of Navy Cross recipient Marine Corp Sgt. Rafael Peralta. During the second battle of Fallujah, he smothered a grenade with his body, absorbing the majority of the blast. He was killed instantly, but saved the lives of his fellow Marines.

The Commandant of the Marine Corps, Gen. Robert B. Neller, gave the principal address. In his remarks, he thanked the family of Rafael Peralta, in particular his mother, Rosa Maria Peralta.

"Thank you for raising a man of character and virtue," he said. "We need more people like him in our world."

Neller said that a ship required three things: A hull, a name, and a crew.

"And when you put those three things together, you create more than just a ship; it's a lifeform," he said. "This is more than just another commissioning. It marks the commemoration of a life and the immortality of a hero. Sergeant Peralta's legacy will forever be part of this ship. All he ever wanted to be was an American, to serve his country."

Vice Adm. Nora Tyson, commander, Third Fleet, stepped up to the podium with the ship's commanding officer, Cmdr. Brian Ribota and placed the ship in commission.

"On behalf of the Secretary of the Navy and for the President of the United States, I hereby place United States Ship Rafael Peralta in commission," she said. "May God bless and guide this warship and all who shall sail in her."

Rosa Maria Peralta, mother of Sgt. Peralta, is the ship's sponsor. Her sponsorship duties saw her christen the ship in Bath, Maine and during the commissioning ceremony, she gave the order to the ship's crew to bring the ship to life, first in Spanish and then in English:

"Officers and crew of USS Rafael Peralta, man our ship and bring her to life!"

The crew enthusiastically replied from its formation on the pier.

"Aye, aye ma'am!" they yelled, and sprinted aboard the ship as the Navy Band Southwest played Anchors Aweigh, followed by a flyover by two U.S. Marine Corps MV-22 Ospreys.

Commander Ribota thanked the guests for attending the ceremony. He then reminded everyone of another constant presence.

"One last person who is here for us today, just three miles away, on Fort Rosencrantz, where he is buried," he said. "Sgt. Rafael Peralta has the over watch and always will. We will always render honors as we come in and out of port here in San Diego."

Ribota also recognized the hard work and determination displayed by his crew - the men and women who made this special day possible.

"In less than three months after moving aboard, they flawlessly sailed this 9,200-ton greyhound over 6,000 miles to get here to San Diego," he said. "We have all come a long way in a very short time."

Peralta was born on April 7, 1979 in Mexico City, Mexico. The son of Rafael and Rosa Peralta, he was the oldest of four children. Immigrating to the United States with his family as a teenager, he graduated from Morse High School in San Diego, California in1997. He joined the United States Marine Corps in 2000, immediately after qualifying for a green card. He became an American citizen while serving in the Corps.