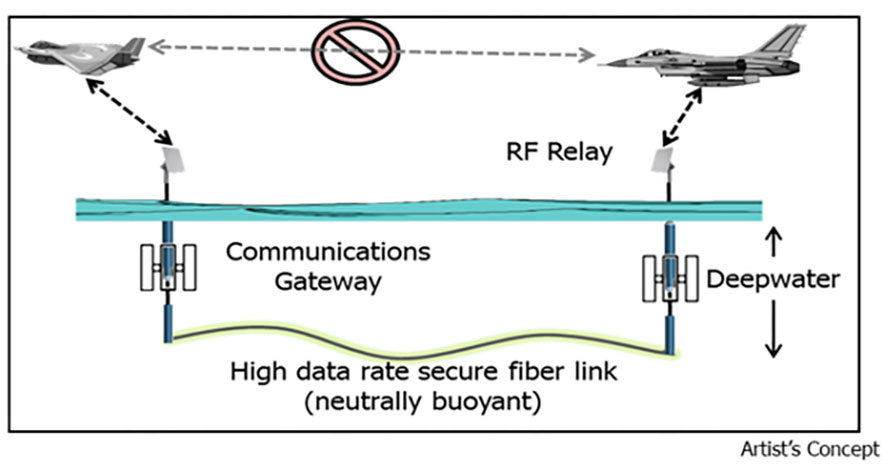 DARPA’s Tactical Undersea Network Architecture (TUNA) program recently completed its initial phase, successfully developing concepts and technologies aimed at restoring connectivity for U.S. forces when traditional tactical networks are knocked offline or otherwise unavailable. The program now enters the next phase, which calls for the demonstration of a prototype of the system at sea.

TUNA seeks to develop and demonstrate novel, optical-fiber-based technology options and designs to temporarily restore radio frequency (RF) tactical data networks in a contested environment via an undersea optical fiber backbone. The concept involves deploying RF network node buoys—dropped from aircraft or ships, for example—that would be connected via thin underwater fiber-optic cables. The very-small-diameter fiber-optic cables being developed are designed to last 30 days in the rough ocean environment—long enough to provide essential connectivity until primary methods of communications are restored.

Supplying power to floating buoy nodes on the open sea presents a particular challenge. During the first phase of the program, the University of Washington’s Applied Physics Lab (APL) developed a unique concept called the Wave Energy Buoy that Self-deploys (WEBS), which generates electricity from wave movement. The WEBS system is designed to fit into a cylinder that could be deployed from a ship or aircraft.

Having now entered its second and final phase, the program is advancing to design and implement an integrated end-to-end system, and to test and evaluate this system in laboratory and at-sea demonstrations. As a test case for the TUNA concept, teams are using Link 16—a common tactical data network used by U.S. and allied forces’ aircraft, ships, and ground vehicles.