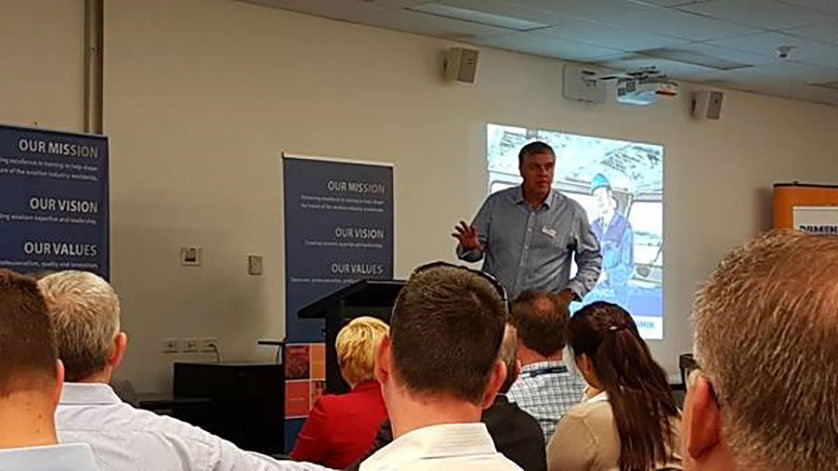 Damen Shipyard Group’s Australian team has delivered two more industry briefings to potential suppliers from Australian industry ahead of its bid submission for the design and build of 12 Offshore Patrol Vessels. Following the success of February’s events held in Adelaide and Perth, Damen hosted a third in Brisbane on March 15 and a fourth two days later in Melbourne.

The Damen group is one of three international shipbuilders shortlisted for the building of the 12 steel-hulled OPVs to replace Australia’s current fleet of Armidale Class patrol boats. One of the requirements of the tender process is that the bidders partner with local shipyards and maximize local industry participation. Two of the new OPVs will be built in South Australia, and the remaining 10 in Western Australia.

The two most recent briefings, led by Mark Todd, Damen’s Australian Representative, were conducted with the main objective to meet face-to-face with local suppliers and provide a direct path to Damen’s supply chain for the project. For Damen, the briefings provided the opportunity to gain first-hand knowledge of the suppliers and their products in the different localities. At the same time, the suppliers were briefed on the criteria that Damen uses to select local partners and gained a better understanding of Damen’s approach to maximizing Australian industry.

The four briefings conducted over the last two months have attracted approximately 800 attendees, which clearly demonstrates the strong interest that the SEA 1180 program is generating.

The ICN Gateway portal which Damen established for the tender bid attracted a significant amount of interest from SMEs wishing to be part of the build. The portal is now closed noting tender submission is due on 30 March; however, the project’s Design Review Process will continue to provide Australian SMEs the opportunity to become involved as Damen aims to lead the foundation project of Australia’s continuous Naval Shipbuilding Programme.

Damen’s record in building vessels overseas with local partners is unrivalled in the industry. The Damen Technical Cooperation program allows clients to have Damen vessels built in their home countries using domestic yards and local labor, whilst accessing Damen’s experience and expertise. Over 1000 vessels, from pilot boats through to frigates and just about everything in between, have been delivered using this program while simultaneously increasing productivity and efficiency at each of the shipyards.

The tender for the SEA 1180 closes on March 30th, and the members of the Damen team are currently putting the finishing touches to their comprehensive plan to build these vessels in partnership with Australian shipbuilders ASC and Forgacs Marine and Defence.