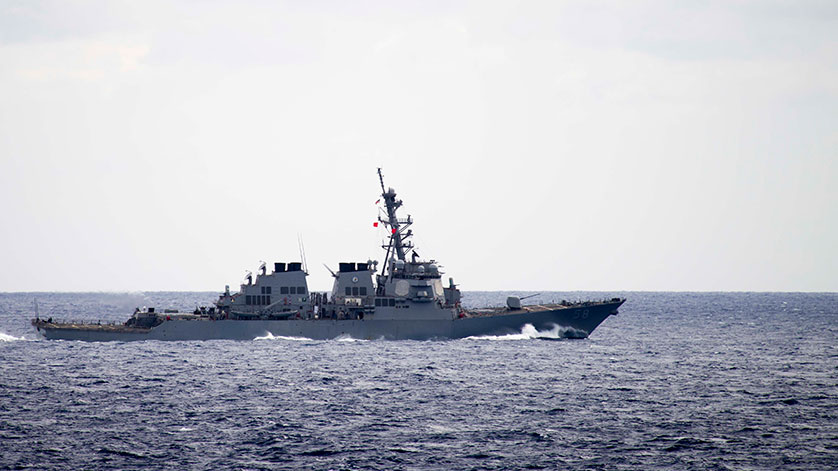 Laboon, conducting maritime security operations in the region as a part of Combined Task Force (CTF) 150 of the Combined Maritime Forces, was conducting an inspection of the vessel as part of a flag verification boarding when the illicit cargo was found.

"Keeping these drugs off the street helps everyone, and keeps money from those who use the profits for harm," said Cmdr. Jason Labott, Laboon's commanding officer.

The operation could not have succeeded without cooperation between U.S. Navy and U.K. Royal Navy vessels under the command of a Royal Canadian Navy commodore. RFA Fort Victoria tracked the vessel using its helicopter and coordinated Laboon's interception.

"The execution of this operation demonstrates the abilities of multinational forces to coordinate across great distances for the common good of the international community," Labott said. "The hard work and professionalism of our boarding team, Laboon's crew, air crews from RFA Fort Victoria, and the shore side support of CTF-150 and Destroyer Squadron 50 deserve great credit."

The commander of CTF-150, Commodore Haydn C. Edmundson from the Royal Canadian Navy, commented that, "This is a big win for the coalition" and that, "We in the CTF 150 headquarters are very impressed with the superb cooperation of all units and organizations involved in this successful operation and we are particularly proud of the captain and crew of USS Laboon for their excellent performance on this important mission."

Edmundson took command of CTF-150 Dec. 8 during a ceremony in Bahrain.

"The impressive work of Combined Task Force 150, under the leadership of Royal Canadian Navy Commodore Haydn Edmundson, continued last night with the second successful seizure of illegal drugs in less than two weeks," said Vice. Adm. Kevin Donegan, commander, U.S. Naval Forces Central Command. "The March 2 seizure by HMAS Arunta and last night's seizure by USS Laboon has resulted in preventing more than a thousand kilograms of combined hashish and heroin from reaching their destination and will prevent transnational terrorists from profiting off these nefarious activities. Ultimately, the continued successes of CTF-150 demonstrate the value of the multinational collective of like-minded nations that make up the Combined Maritime Forces and certify that when navies work together all nations profit with increased maritime security."

Laboon deployed from its Norfolk homeport in January and has been deployed to the region since February. This is Laboon's first drug seizure since its deployment to the region and is the first such interdiction by a U.S. Navy ship under CTF-150 since May 2014.

Established in 2002, CTF-150 is primarily focused on disrupting terrorist organizations and their activities by denying them the freedom of maneuver in the maritime domain. In collaboration with international and regional maritime security partners, the CTF-150 teams have seized and destroyed billions of dollars in drugs and captured thousands of weapons ensuring they are no longer available to organizations that would cause others harm.