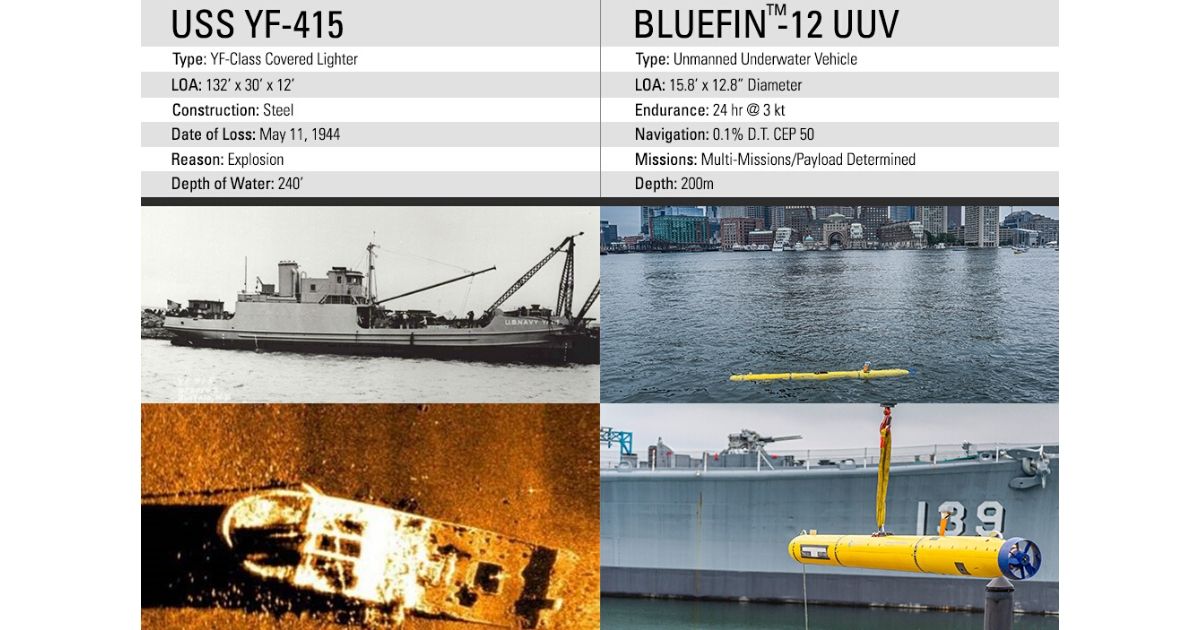 May 11th marked the 76th anniversary of the tragic sinking of the USS YF-415 in the Boston Harbor. The ship was conducting a routine obsolete ammunition dump when signal flares caught fire and ignited shells, leading to a series of explosions that sank the ship.

In November 2019, a General Dynamics Mission Systems Bluefin-12 Unmanned Underwater Vehicle (UUV) captured detailed images of the USS YF-415. The images were captured during the UUV’s sea trials as part of Royal Australian Navy’s SEA 1778 Program to develop mine countermeasures. Coordinates for the YF-415: 42 24.287’ N and 70 40.398’ W.

General Dynamics Mission System spoke with Greg Jennings about his experience capturing images of the USS YF-415 with the Bluefin-12 during its sea trials for the Royal Australian Navy.

Q: Tell us a little about yourself – how did you get involved with the General Dynamics Mission Systems Bluefin team?

My name is Greg Jennings. I joined the Bluefin Robotics team 9 years ago and came to General Dynamics through the acquisition of Bluefin in 2016. I was originally hired as the hydrodynamicist but began doing systems engineering work as well.

Q: What about the Bluefin-12 made this experience possible?

The Bluefin-12’s long-range endurance to run for 24 hours, integration of the Sonardyne Solstice Multi Aperture Sonar, and on-board data processing features made this experience possible. These capabilities enabled the Bluefin-12 to successfully provide ample mission-time and effective data collection and processing, yielding important information to help the team to assess and refine our mission.

Q: How were you able to find and capture images of the shipwreck?

We initially found the USS YF-415 while performing acceptance testing with our SEA 1778 customers from Thales and the Royal Australian Navy. We were required to demonstrate the 24 hours endurance of the Bluefin-12 and chose to perform a large survey in an area where there were charted shipwrecks in hopes of finding something interesting.

We ran the test as part of a weekend-long offshore event.  When we came back to shore Monday evening and reviewed the data, I was stunned to find this beautifully intact wreck in a location where no wrecks were charted. The team was particularly excited about the find because we were really interested in capturing imagery of a shipwreck.

We spent the next couple of days logging the position of the wreck, searching known wrecks in the area, and trying to figure out how we could squeeze another trip out to the wreck into our test program.

Q: What was it like capturing images of the ship from a Bluefin-12?

During a routine weather and testing session where we were demonstrating our Bluefin Witness feature, we had the opportunity to revisit the still unknown-to-us wreck. Witness allows snippets of sonar imagery to be transmitted from the UUV to the operator’s laptop over acoustic communications.

The most exciting part was doing those re-acquire runs back over the location where the UUV said the wreck was and watching the screen with our customers as the Witness images were coming in. Everyone on the boat was packed in a small room glued to the screen. But at that point, the identity of the wreck was still a mystery. It wasn’t until several weeks later, after Jordan Corbin, the Program Manager, contacted the Massachusetts Board of Marine Archeology, that we learned that it was the USS YF-415.

The story really hit home for me because the ship had left dock just across the Back River from my home. It was quite sobering to learn of the tragedy behind the wreck. I hope that the families affected can find some solace in the beauty of the wreck. The imagery also shows large schools of fish surrounding the wreck, demonstrating how the sea has turned this gravestone into a monument to life.