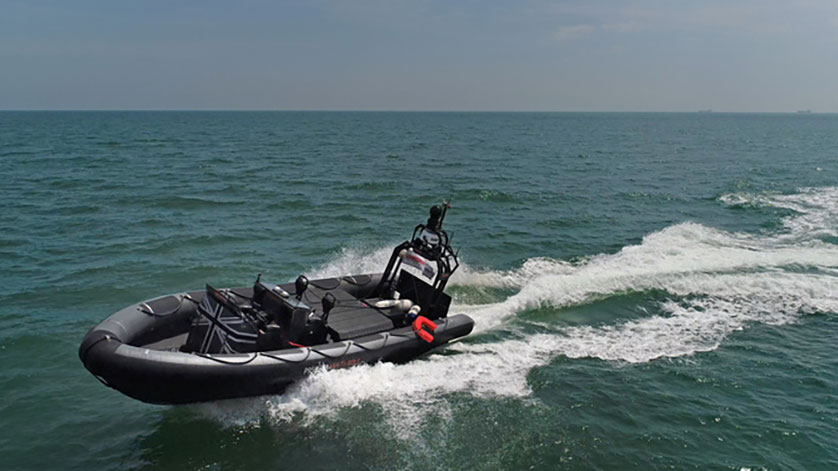 Based around Portsmouth, Southampton and the South East of the Isle of Wight, BAE Systems together with ASV Global (ASV), Blue Bear Systems Research (Blue Bear), Marine Electronic Systems (MES), SeeByte and the University of Southampton, will work together to provide the service’s infrastructure, with other organisations set to join later this year. Together the Solent LEP and partner organisations are investing £1.5 million in this project, the first of its kind in the UK.

The new service will be ready for use later this year and customers will be able to conduct trials and test systems such as unmanned boats, air vehicles and autonomous sensors in a safe, controlled and realistic environment in the Solent. Backed by a comprehensive safety case, the service will make use of a secure maritime communications network and a mobile command and control centre, featuring the same technology BAE Systems provides to UK Royal Navy platforms.

The new service was announced during a two-day launch event at the Royal Marines Museum in Eastney, Portsmouth, attended by more than 100 guests from autonomous systems providers, local businesses, academia, the Armed Forces and other interested parties.

BAE Systems’ Combat Systems Head of Technology Frank Cotton said: “Autonomous and unmanned systems are widely regarded as a vital technology for the future, but there is a great deal of work to be done if we are to unlock its true potential and understand how they are best integrated into wider systems. A wide range of organisations from the defence and commercial sectors, along with academia, have ambitions for this technology and this unique service will allow them to find valuable ways to use it whilst furthering its development. The Solent area has a growing number of world class organisations operating in the autonomy sector and we are excited to be working with ASV, Blue Bear, MES, SeeByte and the University of Southampton to launch this concept this week. It is anticipated that the full test service will go live later this year.”

Solent LEP Maritime Chairman Ian Millen said: “The Solent is the heart of the UK’s Marine and Maritime sector and the assets we possess enable the region, its businesses and the UK economy to compete globally. From the Port of Southampton, the most productive port in Europe, to Portsmouth Naval Base, HQ of the Royal Navy and soon to be home to the largest aircraft carriers in UK history, the Solent is used to making waves on an international stage. The key to this success has always been founded in innovation and, through our investment to create the UK’s first autonomous systems testing service in the Solent, the LEP will ensure that the area and its businesses, large and small, continue to be a driving force for UK innovation for years to come.”

In October 2016, BAE Systems and the test service partners successfully showcased their autonomous maritime capabilities in the Royal Navy’s ‘Unmanned Warrior’ exercise – the world’s first large scale demonstration of innovative maritime robotic systems. BAE Systems’ bespoke ACER (Autonomous Control Exploitation and Realisation) system provided a seamless flow of information from sensors on the unmanned boats to crews on the hosting warships. One of the unmanned boats used in the Unmanned Warrior exercise was BAE Systems’ Pacific Class 950 Unmanned Rigid Inflatable Boat which is capable of travelling autonomously at up to 47kts for up to 12 hours at a time. The autonomous technology on the Pacific Class 950 can be retro-fitted to existing boats.