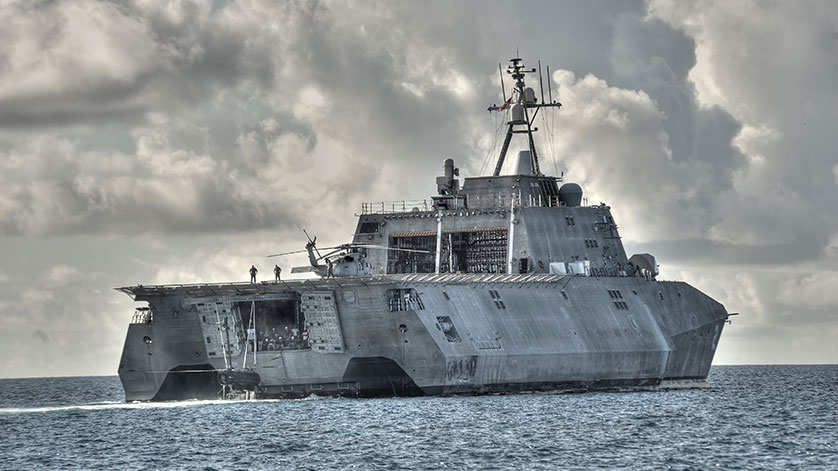 Austal announced the future USS Manchester (LCS 14) has successfully completed acceptance trials in the Gulf of Mexico. This is the last significant milestone required by the US Navy prior to delivery, scheduled for early 2018.

This milestone achievement involved the execution of an intense series of tests on the vessel at sea conducted by US Navy, Austal and Industry. During the two day tests, approximately 250 personal were on board operating and demonstrating the performance of all of the ships systems and equipment. The vessel returned to port carrying a broom in its mast signifying a ‘clean sweep’ of successful tests was achieved.

LCS 14 will be the second Independence-variant LCS Austal has delivered to the Navy in less than six months.

“This is the fourth Austal-built ship to reach this milestone in the last 12 months. LCS 14 is now making final preparations for delivery and LCS 16 is not far behind. Shipbuilding performance in the USA is now very positive and new orders received and expected in FY2018 means that this part of our business will continue to be a major contributor to group results for years to come” Mr. Singleton said.

“We are delivering these ships to US Fleet at a steady and reliable pace, that positions us well for the future,” he said.

Austal has delivered six Independence-variant LCS, one of which, USS Coronado (LCS 4), recently returned to San Diego Navy Base after completing a successful 14-month deployment with the Pacific Fleet.

The LCS program is at full rate production and is continuing its momentum at Austal USA with seven ships currently under construction. Tulsa (LCS 16), Charleston (LCS 18) and Cincinnati (LCS 20) are preparing for trials. Final assembly is well underway on and Kansas City (LCS 22) and Oakland (LCS 24) and the first aluminium was cut on the future USS Mobile (LCS 26) on December 12. Austal also recently received new construction contracts for LCS 28 and LCS 30 – two of the three LCS awarded in FY 2017.