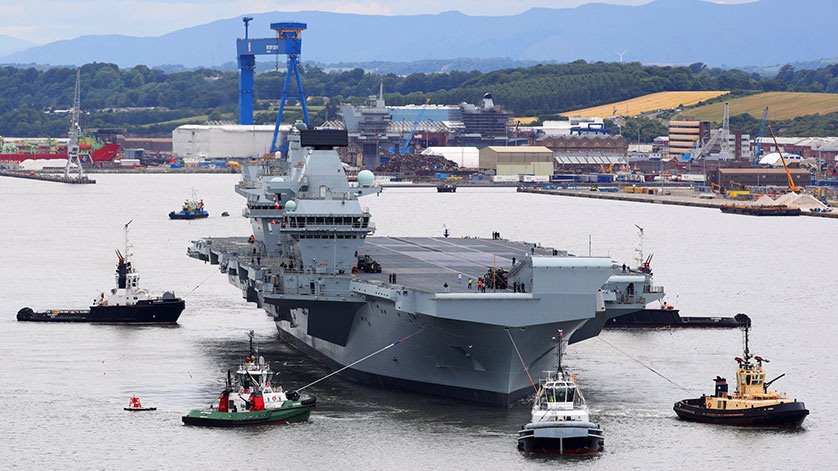 The Royal Navy’s largest ever warship put to sea for the first time to commence sea trials off the coast of Scotland. In a delicate operation lasting nearly four hours, HMS Queen Elizabeth moved from the basin at Rosyth where she has been under construction since 2014, and into the Forth estuary.

There she will wait until ready to pass beneath three iconic Forth crossings – two road, one rail – and begin six weeks of sea trials in the North Sea.

More than 700 sailors, led by Commanding Officer Captain Jerry Kyd, and 200 industry contractors have sailed with the 65,000-tonne aircraft carrier on her maiden voyage.

They will test her engines and propulsion systems, plus her ability to produce fresh water, cope with sewage, feed the crew, and supply those on board with electricity.

There were just 35cm either side of the gigantic hull as the carrier squeezed through the lock at Rosyth, and a mere 50cm separated the keel from the lock bottom as 11 tugs assisted Queen Elizabeth into the Forth.

That delicate manoeuver, practiced more than 30 times in simulators, took place at high tide. Leaving the estuary must take place around low tide – and even then the pole mast must be lowered at a 60-degree angle to allow the carrier to fit under the rail bridge.

“This is a hugely significant moment for the Royal Navy, for all our Armed Forces – and for our island nation. Once in service, Queen Elizabeth will be the largest aircraft carrier in the world outside the United States," said First Sea Lord Admiral Sir Philip Jones. “There is still much work to do between now and then, but be in no doubt: a new era of British maritime power is about to begin.”

The carrier’s departure is one highlight of a national effort which has involved more than 10,000 people across the land – not least six shipyards – devouring 51,000,000 man hours.

Now, says Capt Kyd, the moment has come to see how the ship handles in the real world. "There are very exciting times ahead," he said. “To see her just as a ship is too simplistic. HMS Queen Elizabeth is a mobile four-and-a-half-acre airfield. What that means to the UK’s defense is that she’ll be deployed around the world, a very flexible asset used by all three Services. There is an absolute and compelling reason to have aircraft carriers. We are an island nation, absolutely dependent on trade by sea – and law and order on the world’s sea routes. If you are an outward-facing nation like global Britain, an aircraft carrier sends a real message to allies – and potential enemies – that we mean business.”