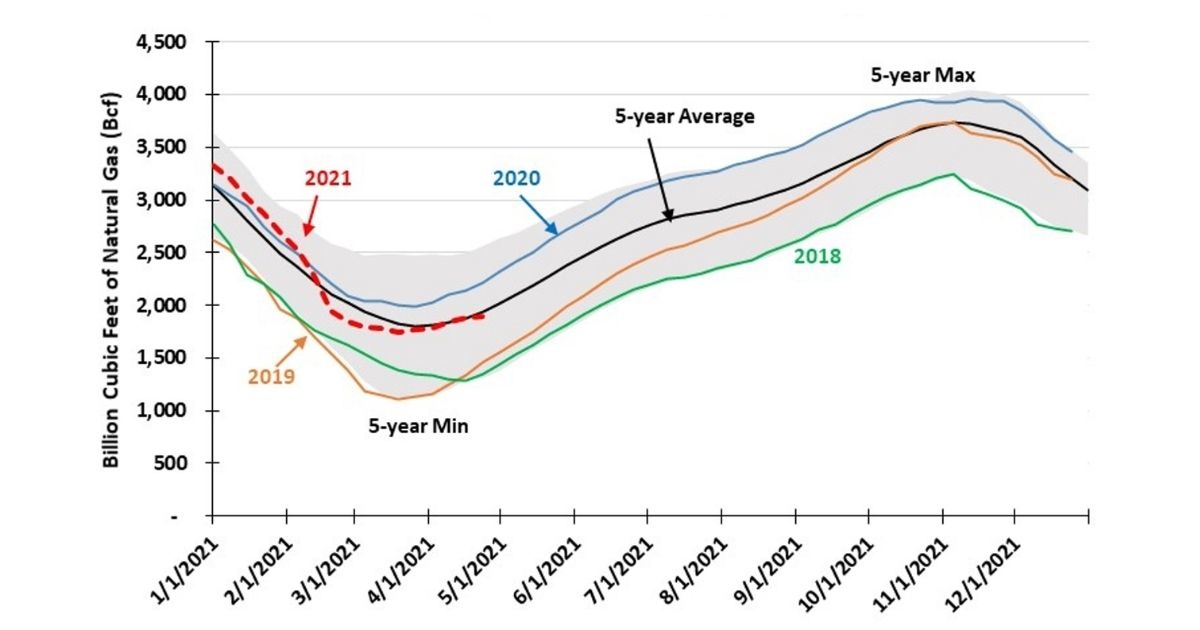 The U.S. economy continues to slowly reopen as the vaccination pace nearly hit three million jabs per day in April. Over 50 percent of the adult population has received one of the various vaccines, and now that the suspension of the Johnson & Johnson vaccine over questions about blood-clot reactions in a handful of recipients has been resolved the prospect of herd immunity for America is on the horizon. The campaign to convince reluctant adults to get the vaccine is shifting into high gear, although the idea of company mandates for employees to be vaccinated to continue employment is becoming a legal and moral question.

With vaccinations rising, states and cities that employed aggressive lockdown strategies to mitigate the spread of the virus are announcing reopening dates for their economies. New York City just said 100 percent open July 1st. This comes after Massachusetts and Boston, as well as California are announcing reopening dates. Office workers are returning—just how many and on what schedules remains unclear. But U.S. oil demand is now within a few percentage points of reaching pre-pandemic levels. 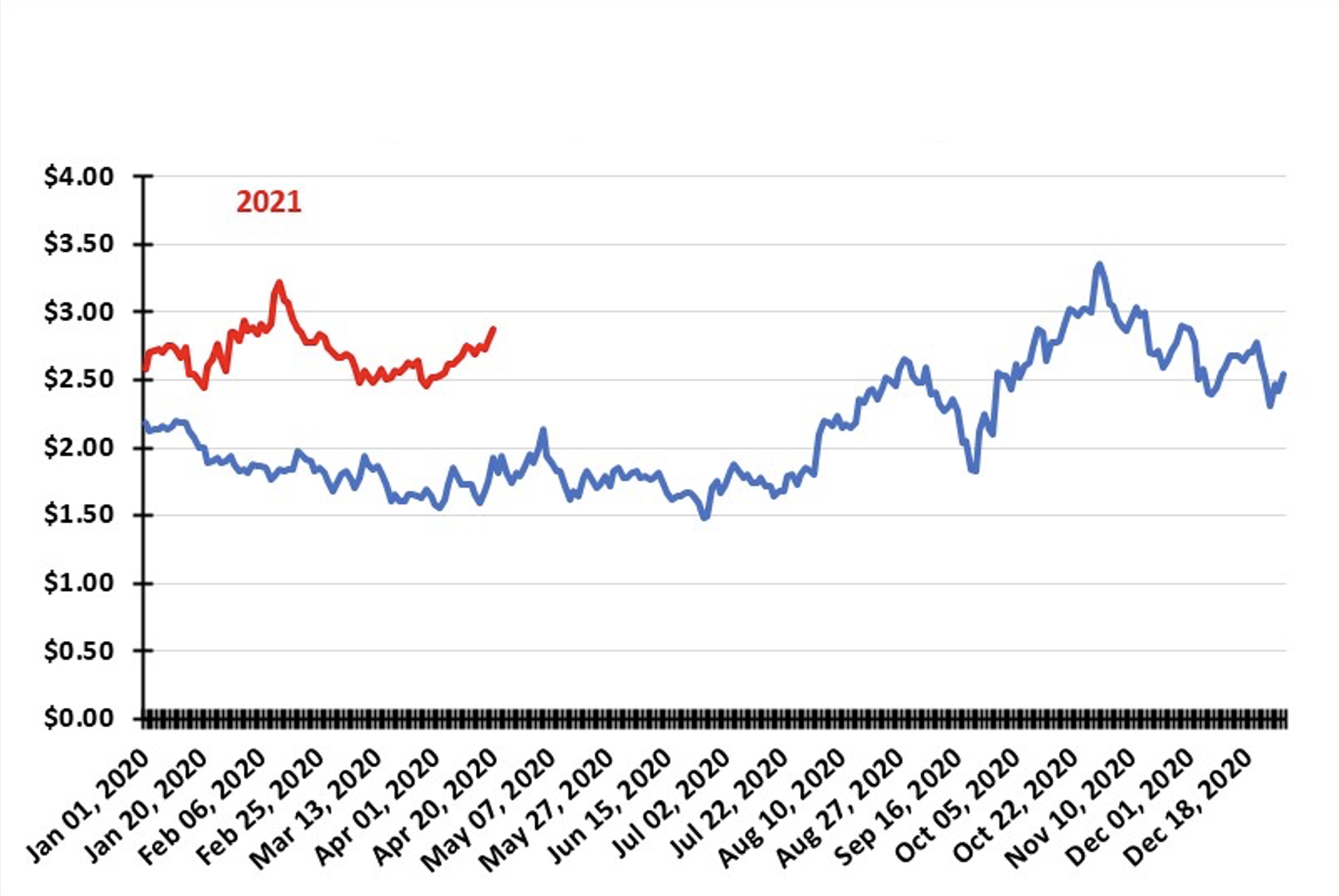 The Energy Information Administration reported that average jet fuel consumption for the four weeks ending April 23 was 1.2 million barrels per day, up 200,000 barrels over the four weeks ending March 26. The number of passengers processed by TSA at airports is establishing new highs. Moreover, major airlines are reporting sharply higher bookings for air travel for the upcoming summer. Colleges and universities are announcing plans for in-person fall semesters. All signs point to a strong second half 2021 economy, and higher energy demand.

The European Union announced it will allow vaccinated travelers to visit this summer, suggesting the continent is heading toward normalcy. With economic green shoots emerging, it is not surprising that OPEC has increased its global oil demand forecast. The 70,000-barrel-per-day boost, while small, marks a change in tone for the organization that now foresees a 5.95-million-barrels-per-day increase for 2021, after consistently cutting its forecast since March 2020, which then called for 7 million barrels more. By slowly adding additional oil supply to the market, OPEC has been able to keep oil prices steady in the upper $60 per barrel range for Brent.

In the U.S., WTI started 2021 at just under $48 a barrel, but then steadily rose, reaching $60 by mid-February. Since then, other than during a brief foray above $65 in late March, WTI has traded in a $60-$64 range. Strong first quarter GDP growth numbers is buoying oil prices. Prices are likely to continue trading in the mid-$60s a barrel range, as traders eye OPEC’s next move on supply and how America’s oil producers react to higher demand and prices. A steady recovery is what everyone wants, and with OPEC sitting on 8 million barrels of idle capacity (9 percent of global demand), stable pricing is likely. 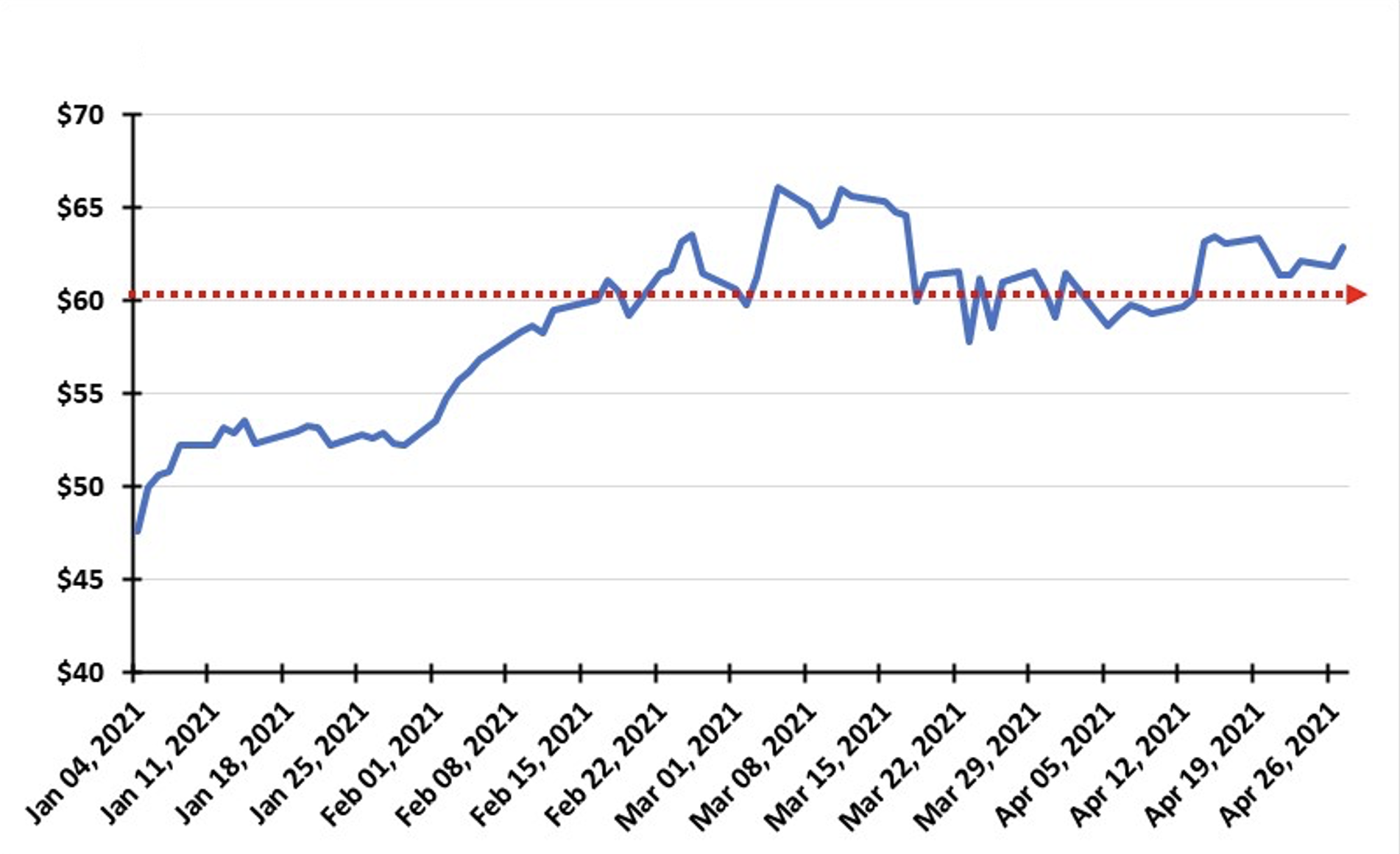 Much like the crude oil market, natural gas prices have traded for extended periods of this year in narrow ranges other than rising sharply in mid-February in response the Arctic vortex that pushed temperatures to record lows and felled the Texas power grid, while also causing short-term power blackouts in other mid-continent and Southeast states. April, however, has proven to be different.

After dipping to $2.46 per thousand cubic feet early in April, the near-month gas futures contract steadily rose to within hailing distance of $3 by the end of the month. In the face of unsettled spring weather that saw bouts of winter conditions returning to various portions of the country at different times, natural gas storage injections have been on the low side of the forecast ranges. This implies that either supply is struggling, or gas for power consumption and/or export is stronger. As U.S. oil production has fallen by 2 million barrels per day over the past year, associated natural gas output has suffered, too. Gas volumes are somewhat less impacted than oil. As shale oil production declines, well output tends to become gassier that helps sustain total gas volumes, slowing the industry’s supply decline.

The bigger issue for U.S. natural gas markets is the demand side of the equation. The colder weather that causes gas prices to rise allows cheaper coal to capture more demand. Utilities have recently talked about shifting to cheaper coal in generating power. The primary demand influencer for natural gas is higher LNG exports, as terminals are operating at peak capacity and a new terminal is firing up. The cold winter in Europe depleted its gas storage, helping LNG arbitrage pricing with the U.S. Gulf Coast.

The latest development, for which there is no history, is that a handful of LNG shipments have been converted into “clean” cargoes using carbon-offsets. Presently, one should view these trades as experimental. Whether substantial volumes can be converted into clean gas cargoes remains unknown. We also have no idea how many buyers may be persuaded to purchase such cargoes, as we believe the logistics adds to their cost. Does the attractiveness of clean gas change when prices move from $2.50 to $3.00? We have no idea, and suspect neither do the traders, yet. This is an interesting development to track as it could add a new dynamic to the global gas market.