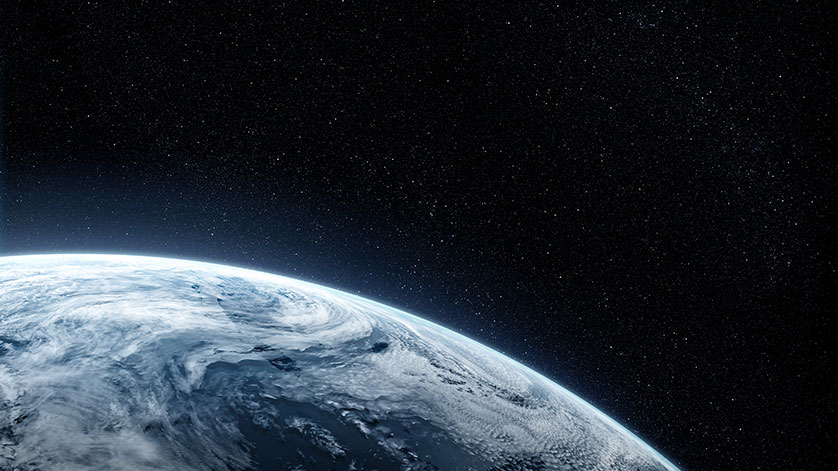 As the initiator of several technological revolutions, including the mobile phone and wireless wearable technology, Finland and high-tech go hand in hand. Now, they have their sights set on revolutionizing a new technological frontier—space.

On 18 April 2017, history was made as Aalto-2 became the first Finnish-built satellite to be launched into space from Cape Canaveral, Florida. Then on 23 June 23, Finland’s Aalto-1 carried the world's smallest Hyperspectral imager into space on the Polar Satellite Launch Vehicle sent up by the Indian Space Research Organization. The Aalto-1 and Aalto-2 missions have ignited the rise astropreneurship and the establishment of a NewSpace sector in Finland. Independent space companies, the first space law, and a Finnish space program are set to reshape traditional technologies, develop faster and cheaper access to space than ever before, and advance earth observations far beyond today’s satellite capabilities.

Invented at California State Polytechnic University and Stanford University at the turn of the century, CubeSats have made space missions affordable for university departments and small independent companies. For Aalto University, CubeSat technology enabled their students to make history by building the satellites for the first-ever Finnish space mission. The first satellite, Aalto-1, had two initial goals: 1) a technology demonstration of the state-of-the-art payload and 2) serve as a learning curve in the operation and management of space missions for future launches.

Antti Kestilä, head of the Aalto-1 mission operations at Aalto University, explains: “Aalto-1’s mission was first of all educational—we wanted to teach, and learn ourselves, how to start and design from scratch, manage, build, and operate a complete space mission. Thus, besides the actual satellite, we have our own ground station as well. We did not have much experience of this kind of project before, and never in the past has this kind of ‘complete’ mission been done in Finland.”

At the start of the project, Aalto University contacted several other Finnish institutions interested in contributing a payload to the mission. The Technical Research Centre of Finland (VTT) provided the hyperspectral imager camera, Helsinki University and Turku University together built the radiation monitor, and the Finnish Meteorological Institute created the more exotic plasma brake—a modified concept based on the principle of an electric solar sail aimed at reducing the amount of space debris.

“The Aalto-1 is a fairly complex satellite with its three main payloads. If everything works well in the long term, a science campaign is planned with the hyperspectral imager and radiation monitor,” said Kestilä. “We built most of the satellite bus system and the ground station in-house with a student workforce that was sometimes volatile in terms of dedication. Throughout its duration, the project included almost a hundred people.”

The launch was initially scheduled with SpaceX’s Falcon 9 at the end of 2015. On two separate incidents, the Flacon 9 rockets exploded, causing a launch delay by over 1.5 years. In the end, it was changed to the Indian PSLV, which launched the Aalto-1 along with 30 other small satellites this past June. 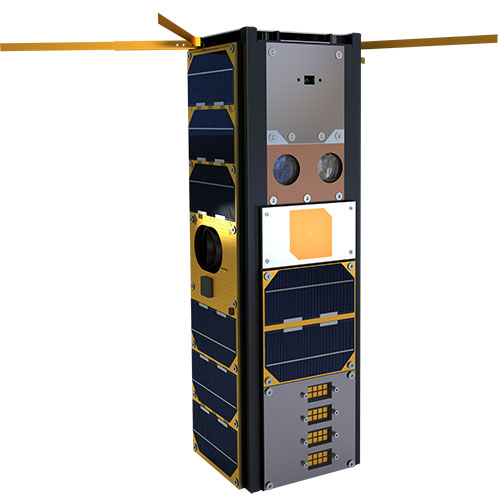 While traditional cameras measure three colors, hyperspectral cameras can measure dozens of freely selected narrow color channels. The measurement wavelengths are also software programmable—the same camera hardware can be easily scaled to different applications, even after launch. For this reason, it can be utilized for a range of earth observation missions such as algae monitoring, water pollution, and vegetation health.

The potential for hyperspectral imaging to progress ocean and coastal science has been recognized for many years. In 2009, NASA launched the HREP-HICO experimental payload into space, providing scientists with an exceptional new view of the coastal ocean and the Great Lakes.

In 2022-23, the NASA satellite mission PACE (Plankton, Aerosols, Cloud, ocean Ecosystems) aims to deliver the most comprehensive look at global ocean color measurements in NASA's history. But, the hyperspectral imager on board Aalto-1 could make it easier than ever before.

Traditional cameras weigh around 100 kg, but the hyperspectral imaging camera built by VTT for remote sensing weighs just 600 g. “VTT’s hyperspectral camera uses novel Fabry-Perot based sensor technology that enables us to miniaturize it without losing much performance. It can even image up to 60 separate spectral channels at one time, creating very high-contrast images. There have been several hyperspectral imagers in past missions, but none this small,” explains Kestilä, who was part of the team that created the system for Aalto-1 as well as for the PICASSO and the upcoming Reaktor Hello World nanosatellite missions.

“The imager could pick out things like seaweed growth in a sea, metal in a forest, etc.—stuff that separate-channeled imaging enables. This imager is the first of its kind, so it can only image an area roughly 150 km2 [in size] with an approximately 100-m resolution, but future ones can be improved significantly in spatial performance.”

In July this year, the team downloaded the first image sent by Aalto-1, which is also the first ever image taken from a Finnish satellite. It was taken while orbiting over Norway at an altitude of about 500 km and shows the Danish coast as well as some of the Norwegian coastline.

Also onboard is the radiation monitor. RADMON is a technology derivative from the Bepi-Colombo ESA mission to Mercury. The Aalto-1 team aims to measure radiation in a selected energy spectrum, studying the radiation environment in low Earth orbit (LEO). The South Atlantic Anomaly—an area over the south Atlantic that affects aircraft and satellites due to the Van Allen Radiation Belts—is one such target phenomenon they will be studying.

“The RADMON is a tech demo as well. If it works, the South Atlantic Anomaly is a good way to show this. In a later science campaign, it'll have other phenomena that it can hopefully be able to detect, and maybe even reveal new and interesting properties about them and, for example, how space weather driven by the sun affects them,” said Kestilä.

“If everything works as expected, we’ll try to do a science campaign with images of selected parts of the planet and chart large portions of the LEO radiation environment. After maybe six months to one year, we then intend to significantly change the satellite attitude so that we can start with the plasma brake mission—this requires the satellite to be pointed in a different orientation to that required by the spectral imager and RADMON.” 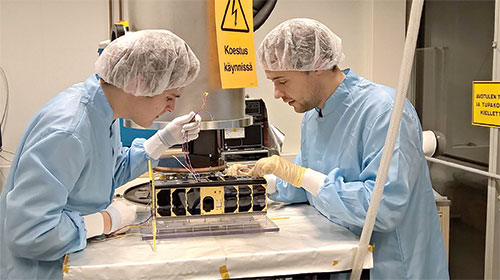 The Launch of Finland’s Space Industry

Finnish scientists are not new to space technology. In fact, there are already over 300 Finnish employees in 60 companies in the space systems and applications industry. Finland has also contributed to almost every major European Space Agency (ESA) mission to date, demonstrating their abilities in producing complex, compact, and superior space technology. Now, the emerging trend towards nano- and microsatellites perfectly align with Finland’s unique position—they will no longer just contribute, but build their own space empire.

From the Aalto-1 project, two spin-off companies have been formed with plans to launch their first small satellites within the next year. The students who built Aalto-2 now work at Reaktor Space Lab, a start-up company that designs, manufactures, and tests small satellites.

Smaller satellite platforms and sensors will allow one rocket launch to carry dozens of satellites, significantly reducing launch costs and opening the sector to more independent companies and individual departments. With more players in the industry, the next decade will likely be an exciting one for space industries. We could see a boom in technological advancements across the sector and witness the swift expansion of capabilities beyond today's reach.

Furthermore, small satellites can form large constellations, extending the data network and information infrastructure to remote areas such as the Arctic Ocean. Finland’s space strategy highlights an interest in projects that will respond to the Arctic’s growing demands, such as accurate navigational data for vessels, or changes in natural conditions, such as the melting of glaciers and permafrost.

Aalto University is launching another CubeSat, the Finland 100-satellite, later this year. The satellite sports a wide-field white light (“normal”) camera and a low-frequency (1 to 10 MHz) radio payload with which it can record a range of “natural” radio-signal emitting phenomena, such as the northern lights. Notably, the satellite was also partly 3D-printed, which is rapidly growing in popularity in the space community.

Kestilä comments: “After the delays to the Aalto-1 mission, we are very delighted and somewhat relieved to launch and have it operating as intended. For Finnish space efforts and technology, finally launching Aalto-1 and getting its first image down was a historical event. And it has been a tremendous experience to be a part of it! I’ve now been part of a complex space project from the start, giving valuable insight into such types of missions and the challenges we face. These missions are a culmination of years of work, learning, and waiting. It also gave validation to the efforts of the hundreds of people who took part, helping us and the Finnish space industry continue with newer and braver projects.”

Professor Jaan Praks, project director and co-founder of Reaktor Space Lab, added: "These small satellites have started a new and exciting space era in Finland. The young CubeSat generation has brought innovation and new strategies to the commercial sector and, at the same time, the Finnish scientific space program is emerging. The newly founded Center of Excellence on Sustainable Space—uniting [the] University of Helsinki, Aalto University, University of Turku, and [the] Finnish Meteorological Institute—is planning a series of CubeSat missions and technology development in the coming years. Now, space is more accessible and popular in Finland than ever before."